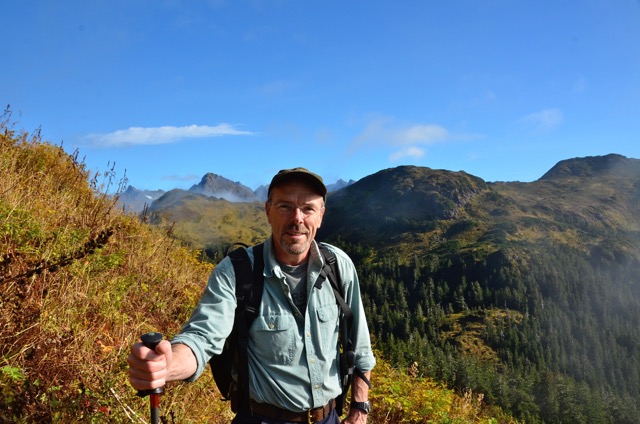 This tribute was written by Kenyon Fields.

Conservation means different things to different people. To William Stortz, it meant a fully interactive love of the land, wildlife, and an engagement that put food on the table. William wasn't much of a joiner, and didn't tend to show up at rallies nor have use for activist bumper stickers. But every free minute he was out on the land and waters, being part of the environment. It was deeply important to him that the environment be respected for what it provides us, and anyone who had the opportunity to look in his chest freezer knew that he defined "subsistence".

William grew up in north central Kansas, and by 1974, he and his brother Steve were in Florida for a stint of boat building and boat deliveries. Keeping roots in Kansas, they also shared a farm where they did small-scale organic farming. By the early 80's, the brothers were building homes in Colorado and William struck north for Alaska in 1983. Not long after opening a cabinet shop in Fairbanks he met Libby Finesmith, and half a year later they married on August 26, 1984. Their beloved daughter Sasha joined them a year later. The Stortzes became Sitkans in May of 1988, and William worked at SEARHC until 2011 when he became the fire marshal and city building official.

Deeply concerned that the subsistence lifestyle enjoyed by so many Alaskans remain unimpaired, William would attend meetings about logging quotas, attend subsistence hearings, submit comments on various agency land-use plans, was a member of SCS, and contributed to the Living Wilderness Fund and other conservation organizations. William's roots reveal that his concern for a healthy, providing environment was far more than ideological.

William grew up eating squirrels and rabbits that he'd shoot with a gun he owned by age 11. William and brother Steve were organic farmers before the word "organic" existed. As Steve put it, "our internet was the Whole Earth Catalogue," and they viewed the world with a"whole systems" view of interconnection. As such, William was as interested in the junco that landed on his bow as was the bow's target animal. He loved the climb up the mountain as much as the goat he hoped to bring down it. His Precision Boatworks skiff was a fish hauling machine as well as a whale watching tour boat or simply a platform from which to show visitors his beloved Sitka environs. William was as adept at hunting with a camera as a gun, and his bird books served as naturalist journals, with annotations and anecdotes tracking a life of avian friendship.

He opposed hunting for sport, and believed you always eat your quarry. More than that, his quarry came home well dressed, clean and ready for the pan. And we're not just talking venison and salmon. Libby and Sasha were well provided for with herring roe "sandwiches," Coho caviar, spot prawn pasta, lox, local sushi and everything their environs offered.

In Steve's words, the brothers grew up as "gun toting, red meat eating, died-in-the-wool liberals from rural Kansas," so William learned early on to find ways to open people's minds to alternative views. While those who shared coffee with him every morning at the Backdoor Café know William wasn't shy of strong opinions, in general he had an indirect and subtle way of being a conservationist. While he thought it crazy for people to chain themselves to the pulp mill as a means of protests, he knew well why they did and shared many sentiments with the more outwardly vocal. When embedded in circles that didn't self-select as conservationists, he would use facts and gentle persuasions, versus banners and emotions. He considered himself to be what real conservatives used to be like, and had plenty of conservative credentials amidst his otherwise rather liberal cosmopolitan breadth of knowledge and interest in the world.

In a sad irony, nature took William too soon. Though as safe and prepared a boat captain as a buddy could ask for, we would not have been completely surprised if the ocean overwhelmed him some day. But William was lost to a landslide in Sitka on August 18, 2015.

We are all the better for having been touched by his curiosity and drive, his eyes full of spark, and his commitment to family, friends, community, and nature. Libby asked that memorial donations be sent to Sitka Conservation Society, amongst other local organizations he supported. We will all dearly miss a man who embodied "living Wilderness".