Tlingit and Haida Potatoes: Eyes Into a Unique History 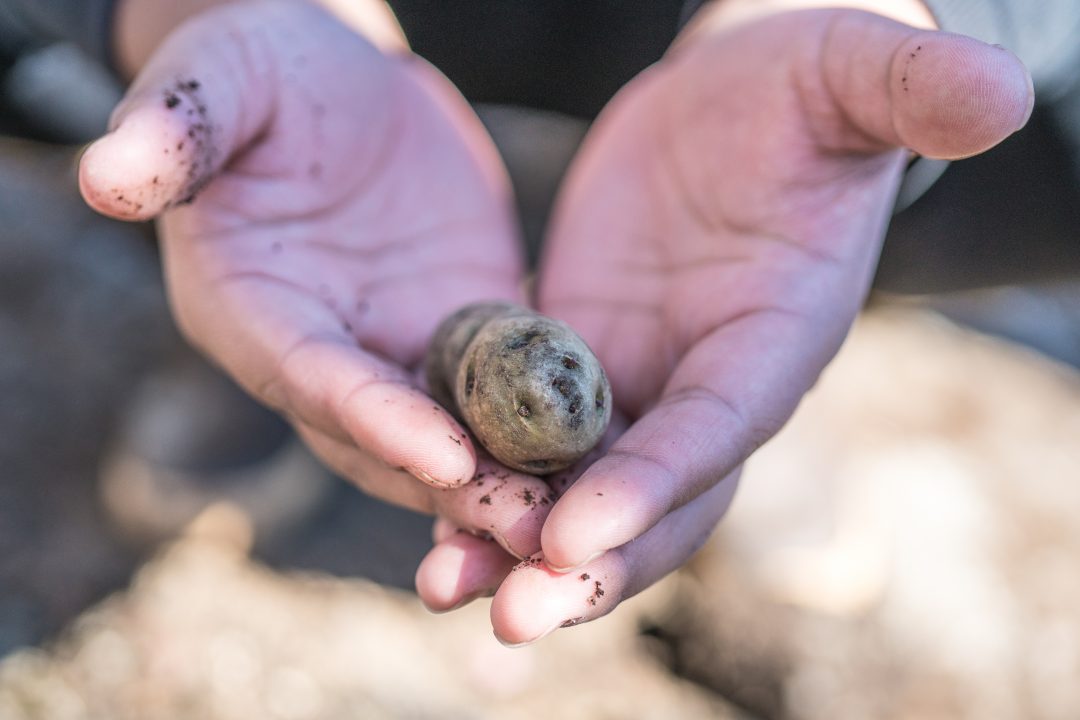 On a sunny Sitka afternoon, a group of Pacific High School students and community members carve four inch deep lines into the soil. Gingerly, the students cradle seed potatoes in their palms. These small fingerlings, studded with dimples  also known as ’eyes’, aren’t your typical Russets or Yukon Golds. The United States Forest Service and Sitka Tribe of Alaska are partnering to cultivate a unique community garden. With sprouting eyes facing toward the sun, the group carefully lowers ‘Tlingit potatoes’ into the earth.

This variety of potatoes is also called Maria’s Tlingit, named after Maria Ackerman Miller of Haines. Because potatoes are cultivated not by seed but by planting part or all of the tuber, each new season of potato is a genetic clone to it’s parent. This means that a potato planted now could be genetically identical to the original ‘cultivar’ planted a century ago. Families may care for potato varieties that fare well in a given climate and pass these unique lines from one generation to the next. Maria’s Tlingit family cared for this particular lineage for over 150 years. 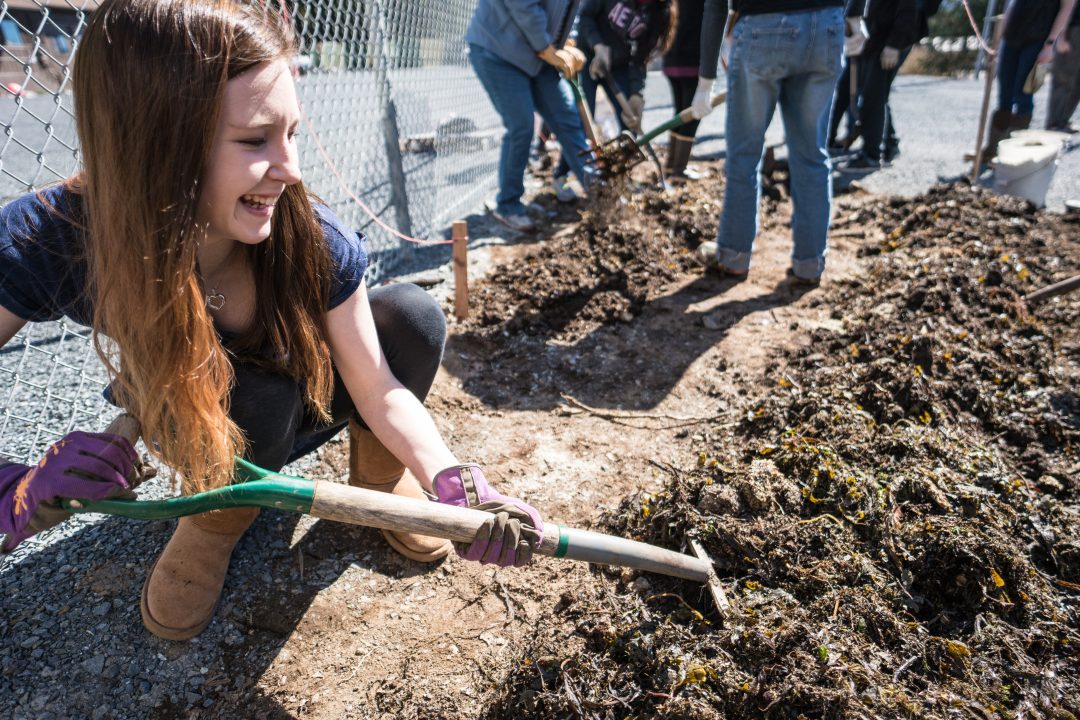 If we could teleport back in time, Maria’s Tlingit potatoes would be found in many south facing gardens and patches across the region. The method of cultivation for this variety was pretty hands off. “I call it ‘plant it and forget it’,” laughs Elizabeth Kunibe. Kunibe is the leading academic researcher of Alaska’s unique potato past. Because of their easy cultivation, Kunibe explains that Native gardeners often planted large patches on nearby islands with ideal growing conditions.

In Sitka, oral history traces local potato cultivation north to the turbulent and wild coast of West Chichagof Island. Tucked into a calm cove, sits the ‘Potato Patch’ where story has it, that the Tlingit people would plant rows of these potatoes on their way to fish camp annually. Each autumn, in wooden dugout canoes laden heavy with dimpled spuds, they would return home each autumn to stock underground cellars with a winter load of these nutritious root veggies. Attentive locals still report stumbling upon potato plants in this lush meadow today.

Potatoes are not native to Southeast Alaska however. So how did spuds migrate to our island-clad rainforest?

“At first people thought that European settlers brought them, but the thing is, there were potatoes here before the settlers,” says Kunibe. Settlers did bring potatoes from Europe but they were  different varieties.“The other theory is that Russian explorers and fur traders brought potatoes as they circumnavigated Chile. And then there’s also many Alaska native stories about Tlingit and Haida travelers who were going down to South America in big canoes who brought potatoes north.” Kunibe believes that potatoes populated our coast via a combination of these theories. 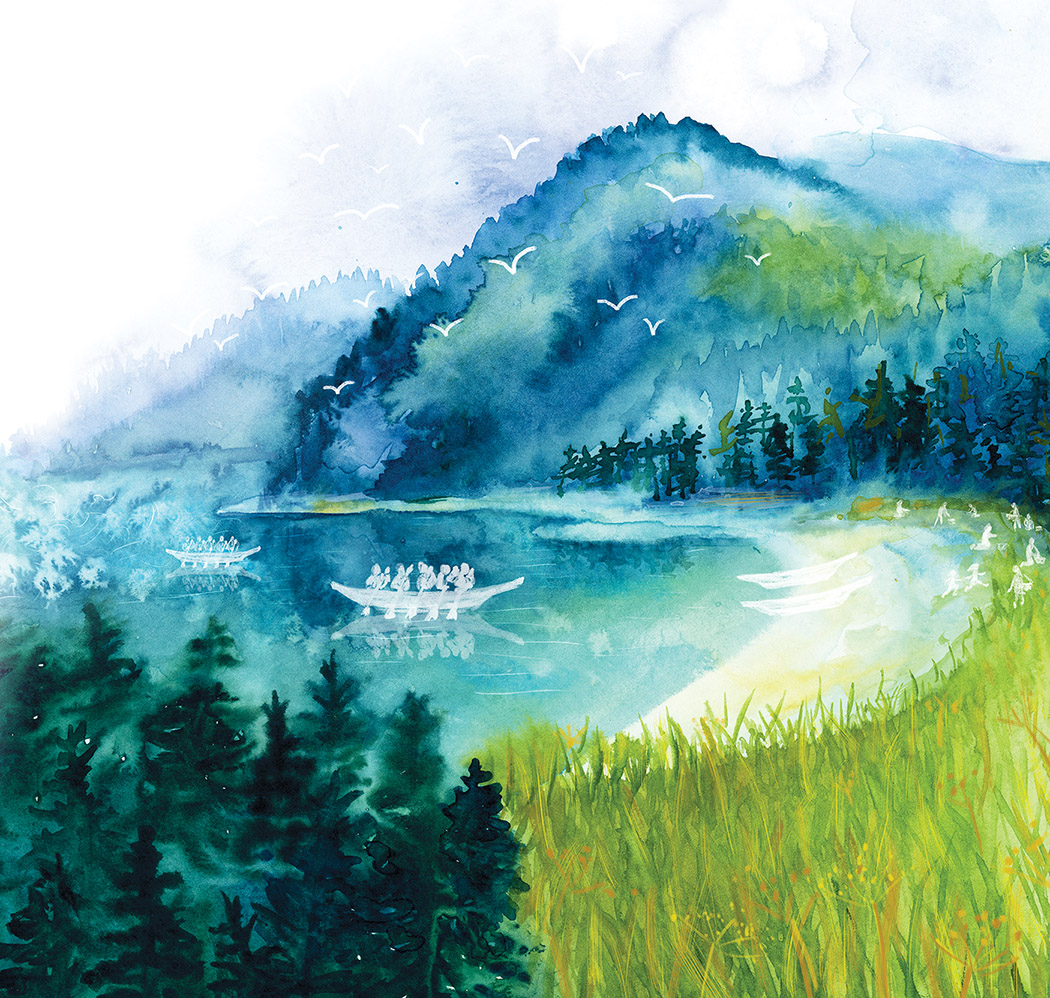 Maria’s Tlingit potato is a ‘primitive cultivar’ meaning they have not been selectively bred and genetically altered like most commercial varieties today. Their ancestry has deep roots. According to Kunibe, primitive cultivars “usually have more eyes and some may be oblong and finger shaped.” Thanks to advances in genetic research and collaborations like ‘The Potato Genome Project’ that Kunibe works with, we can trace Maria’s Tlingit back to Mexico or Chilean varieties.

There are only four varieties of primitive potatoes traditionally grown by Native North Americans according to Kunibe. Two of those, the Tlingit potato and one other, are grown right here in the temperate rainforests of Southeast Alaska. To learn more about the second spud, we need to leave the garden plot in Sitka and head South to Prince of Wales Island.

Down an ambling gravel road is the tiny remote village of Kasaan. With just 60 year round residents, Kasaan is the smaller of only two Haida villages in Alaska. Here, between ocean and forest, Eric Hamar and his family prepare to plant Julie’s Kasaan. This genetically unique variety is often referred to as the Haida potato.

“Deer don’t eat them, that’s nice. They pretty much bother everything except the Kasaan Potatoes,” says Hamar. His family has been planting Haida potatoes in their hometown for six years. “They are definitely more suited to the climate compared to other potatoes. They are really rot resistant,” says Hamar and that’s not the only reason his family digs Julie’s Kasaan. “They taste very, very buttery. You almost actually don’t need to put butter on them,” says Hamar.

When it comes to chatting about the deep history of Julie’s Kasaan potato, Eric defers. “Don’t ask me, ask Julie,” says Hamar. Julie Coburn, the ‘Julie’ in Julie’s Kasaan gave Eric’s father a box of shriveled old seed potatoes years ago. Today, she lives in the Pioneer Home up in Anchorage. “She’s 95, sharp as a tac and fiery,” Eric warned.

“Let me tell you, those potatoes have been in my family for well over a hundred years!” says Julie Coburn. Coburn has a melodic laugh and a sing-song voice that could draw a grin from a stoic. Her great aunt on her father’s side brought the original Julie’s Kasaan potatoes up from Washington State by dugout canoe over a century ago. She has many fond memories of her potato planting past.

“Oh yes, potatoes were a very big thing. Just about everybody in Kasaan had a garden,” say Coburn. Each spring, Julie and her family would scramble aboard her father’s 45 foot seiner and head to Adam’s Point up the bay where it was flat and south facing.

“We made a big deal of it and we would spend maybe a couple days planting potatoes and cooking over a beach fire and we always had a big coffee pot of course. We would put herring in a barrel and let it rot, good and proper and we used that for fertilizer and a lot of kelp and seaweed which was easy gathering.” 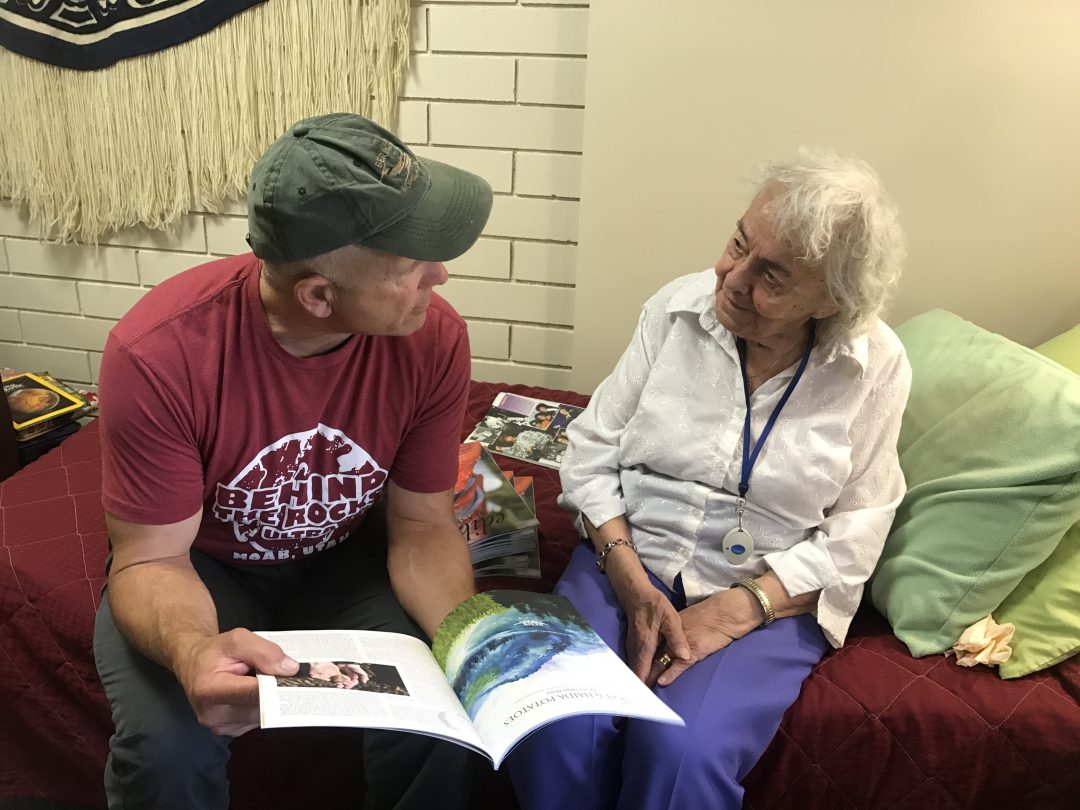 Julie is read this story at the Pioneer Home in Anchorage

After the leaves died down in autumn, Julie and her family would return to reap their harvest. “That was the fun part! You never knew what you were going to find as you kept on digging and digging each hill. I can remember my dad said it was a good year when we harvested 800 pounds of potatoes for our family alone!”

He built an underground root cellar for their bounty and while 800 pounds of potatoes may seem excessive to some, this is not the case for Julie Coburn. “Potato salad, fried potatoes, baked potatoes,” Julie sings. “Mashed potatoes, stuffed potato, boiled potatoes, potato salad! We enjoyed those potatoes every which way we could think of,” says Coburn.

Julie is certainly a fan of her namesake. How would her parents and great aunt react if they knew this potato would pass down in history named after her?

“Ha! They would be shocked, amazed and delighted,” says Coburn.  “I was the keeper of the seed for a while but I just did it for the community. I never called myself the ‘keeper of the seed’, I just did it because I wanted to and didn’t expect anything as return,” says Coburn who has shared seed potatoes across Kasaan, in ports along the coast, in Oregon and in Washington. “I do always tell the people I shared with to spread it amongst your friends so they can have a garden too.”

Julie’s generosity is contagious. With support from SEARHC, the Organized Village of Kasaan and the Alaska Native Fund, the school in Kasaan is preparing to plant a community garden plot of Julie’s famous buttery fingerlings thanks to a donation of seed potatoes from Eric Hamar’s family. This tiny Haida village is dead set dedicated to keeping Kasaan’s potato heritage thriving long into the future. 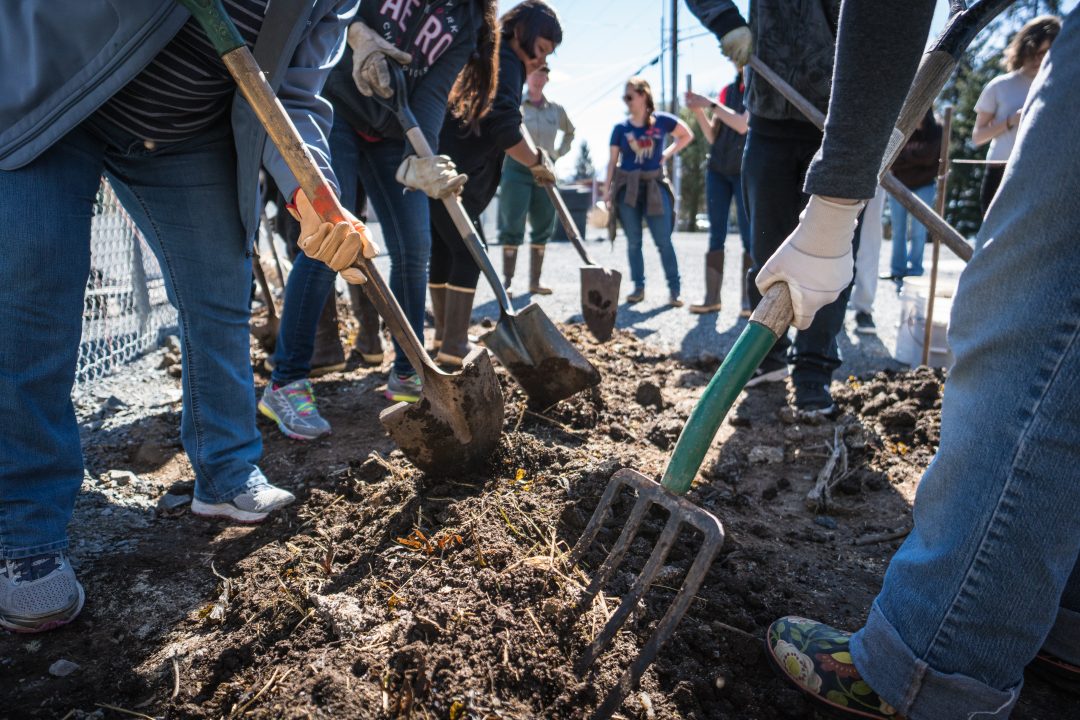 These little potatoes are more than a lip-licking connection to our region’s colorful cultural heritage. Protecting seed diversity is important and Tlingit and Haida potatoes are uniquely suited to thrive in our rainforest climate. Protecting hardy plant varieties and maintaining a diversity of types translates into greater resiliency and more success for growers in the long run helping to combat climate change and beat out yearly fluctuations.

Good news for Julie, Maria and all the other seed keepers and sharers across the Southeast, efforts are ramping up to cultivate and share these traditional Tlingit and Haida potatoes. From the Klawock Cooperative Association’s garden to community and household gardens in Juneau and beyond, Southeast Alaskans are hungry for these unique little tubers.

Back in Sitka, the students delicately blanket their tiny time capsules with seaweed in the same way Native Alaskan gardeners have done for over 220 years. Michelle Putz, one of the lead organizers of the event hands over two additional seed potatoes for the students to plant in their own school garden. With dirt under their nails and smiles splayed across their sun-kissed cheeks, the students pile back into the bus and eagerly look forward to the autumn harvest.