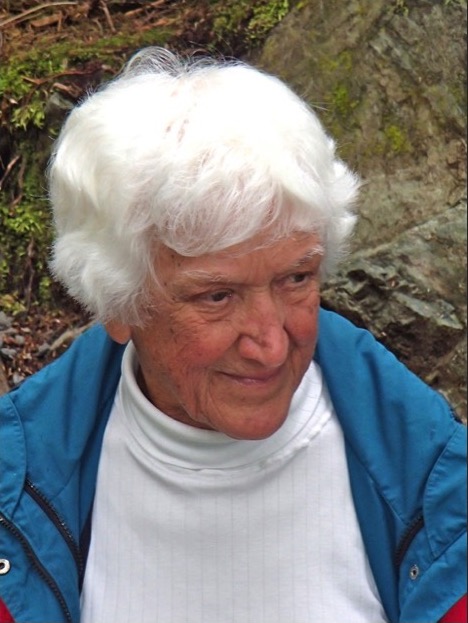 This tribute was written by Judy Neuhauser.

In 1952, Sue Atlee had a choice to make. She was newly graduated from Penn State University with a degree in education. She looked at the possibility of going to Alaska to teach in a native school. She also considered going to Mexico to work in an AFSC work camp where her par amour Biddle Atlee was also working. She chose love.

This love took her all over the world: from Mexico to Guatemala; Panama and Ecuador to Burundi; from Santa Cruz to San Luis Obispo, California. Wherever she was, she became totally immersed in the issues and sought ways to make a difference. In all, Sue traveled to and worked in over 30 countries. But she never made it to Alaska. However, that changed the summer of 2014, at the age of 83.

Sue was so excited to finally travel to Alaska. She walked the flats of Totem Park in Sitka in awe, listening to the conversations between the ravens and the eagles and to the comments from David Steward about the significance of the carvings and animals; soaking in the grace of the rainforest; wading into Indian River where the humpies were gathering for their spawning migration up-stream. She examined the sphagnum growing in abundance along the trail to the waterfall near Beaver Lake and walked the Sheldon Jackson campus, musing on whether this was the school where she might have taught had she made a different decision 62 years ago. She climbed into the kayak and gloried in being out on the water of the channel leading back to Sawmill Creek. The Sawyer glaciers in Tracy Arm stunned her with their size and the explosiveness of the calving process. "I had no idea!" became her mantra — the sheer scale and wildness of the Alaska wilderness, the magnificence of the dripping forests, the sounds of the glacier, the sheer number of salmon amassing for their final swim up-river, the stillness of myriad islands draped in fog as the ferry slipped by on the way through the inland passage. In those short two weeks she became a passionate advocate for allowing the wildness of Alaska to remain wild and pulsing with the rhythms of life she had witnessed. One month later, Sue Atlee died unexpectedly and quietly in her sleep.