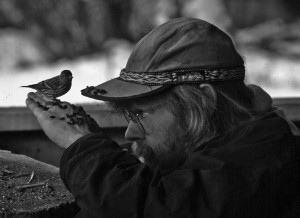 This tribute was written by David S. and Marge Steward.

Richard Carstensen is a naturalist from Juneau, Alaska, one of the founders in the late 1980s of Discovery Southeast, a non-profit group bringing natural history education to all of the capitol’s public schools. He is co-author of The Nature of Southeast Alaska, The Enduring Forests, Book of the Tongass, The Coastal Forests and Mountains of Ecoregion, and Salmon in the Trees. From 1996 to 2004 he was the field leader of the Landmark Tress Project, documenting Alaska’s finest remaining large-tree forests. In 2005, with Bob Christensen, he began the Groundtruthing Project, the “eyes and ears in the woods” for Southeast Alaskan conservation community.

We first met Richard on Sam Skagg’s sailboat, Arcturus, in 1996 when he led a group of eight scientists and conservationists on a fabulous trip to Prince of Whales Island to seek out the oldest, tallest trees in the forest—what we then called “The Temple Trees.” On that trip we learned how to specify the location of the trees and to measure their size and age. We also described their surrounding habitat. Every evening we talked about what we had learned and sought to figure out how to use the information both scientifically and politically. Loggers are still cutting the biggest trees. The principle targets have shifted from streamside spruce to upland red- and yellow-cedar, which means that our “landmark Trees protocol” which prioritizes riparian spruce stands is now less politically urgent.

Even then Richard was our wilderness specialist. He knew how to do things and he led us in and out of the forest with practiced skill. Richard is the man we would choose to get us through a wilderness trek.

The Temple Trees became (for political reasons) the Landmark Trees. Richard has pursued the documentation of these trees with contagious passion. But his passion extends far beyond trees to the entire extent of the Tongass. He is a complete naturalist, drawing delightful pictures of creatures and mountains as well as tress, to place in his already classic books about Southeast Alaska. And his groundtruthing activity has been adopted by the Sitka Conservation Society as an important thread in their summer work.

We always are delighted when Richard visits us in Sitka. He sets up his mono-scope at our living room window and we see unexpected birds on our beach—and we talk about The Temple Trees.

Richard Carstensen’s name was added to the Living Wilderness Celebration Board in 2010.