SITKA — In early spring, the forests and estuaries begin to thaw. With the softer earth and longer days, Sitka’s residents thaw too. We stretch our arms and arch our backs, padded with a little extra winter weight, toward the increasing sunlight. We look to our coastline for the return of the herring. 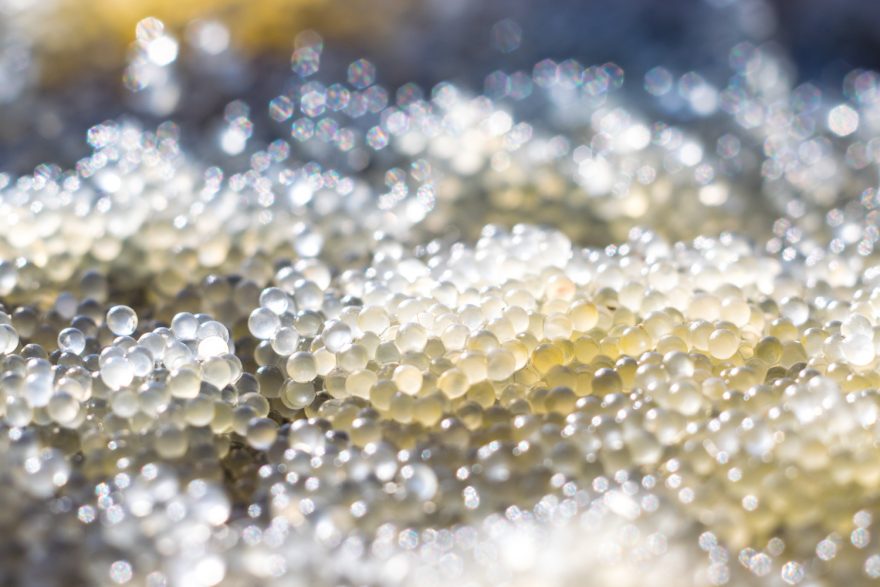 In Sitka Sound, herring have always been harbingers of spring. As they return en masse each year they carry on their iridescent backs the promise of warmer weather and seasons of subsistence. Seabirds, sea lions and fishermen compete aggressively for this plentiful food source. Hoards of humpback whales return from Hawaiian waters in pursuit of these silvery fish. Hunting in packs like wolves, they dive deep, flukes slipping into the sea. Our waters erupt with life.

Back in town, Sitka clamors with activity too. Our harbors flood with visiting seiners and tenders awaiting the commercial herring sac roe fishery. Locals prep their skiffs and begin eyeing young hemlock trees in preparation for the subsistence harvest. Wade Martin, 51, is a Chilkat Tlingit who has been harvesting herring eggs locally for 40 years.

“During herring season, there is no place better than Sitka. It’s a really happy time of year for animals, for us,” Martin said. “Just to be part of it all is a privilege. It’s more than cultural, it’s in my blood and I could not imagine not doing this. I’d go crazy.”

From his 18-foot aluminum skiff named Raven, Martin hustles through the Sitka Sound island chains with his eye to the water and his ear to local chatter. This year, he promised more than a half-ton of roe to friends and family around the region. 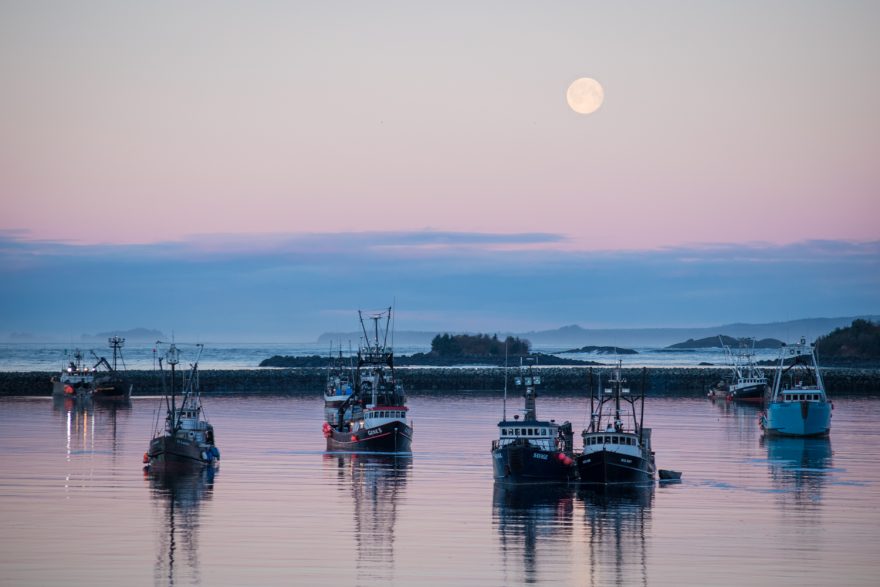 The season begins at the Sheet’ka Kwaan Naa Kahidi Tribal Community House, when community members join the Sitka Tribe of Alaska in prayer.

“We are especially thankful for our culture for our people and our ways that you have taught us as we celebrate the herring run, its history,” says John Duncan while Roby Littlefield pours channel water over the herring rock.

News Lawson explains the significance of this rock and the herring season. 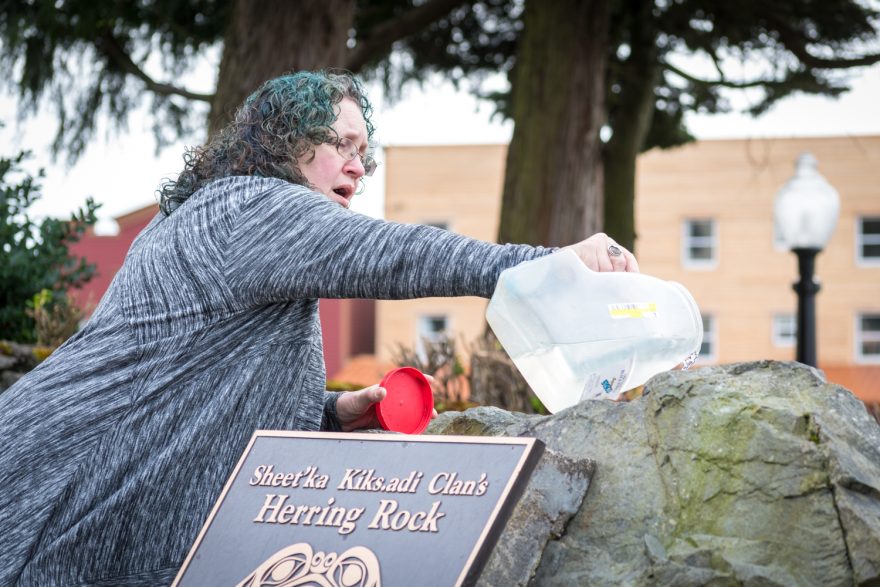 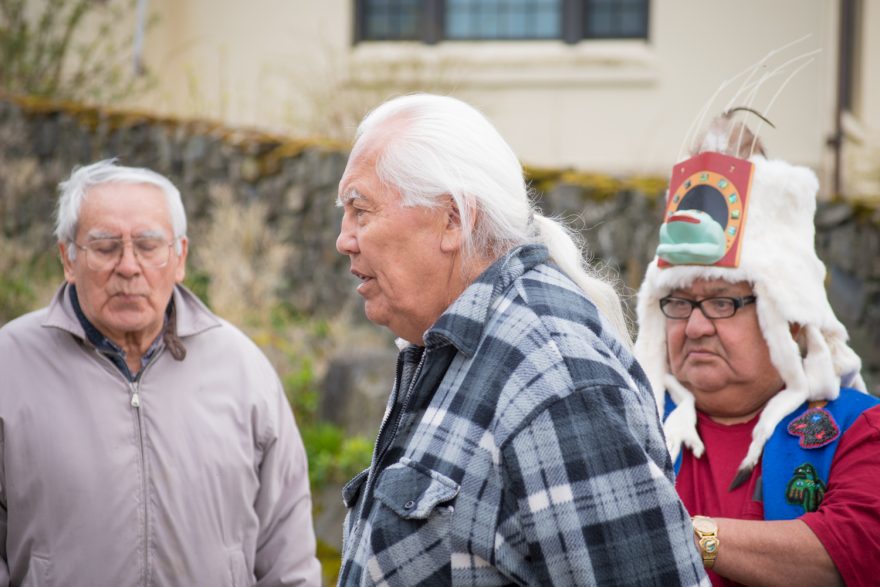 The timbre of the prayer is calm and steady. Out on the water, the pace is entirely different. 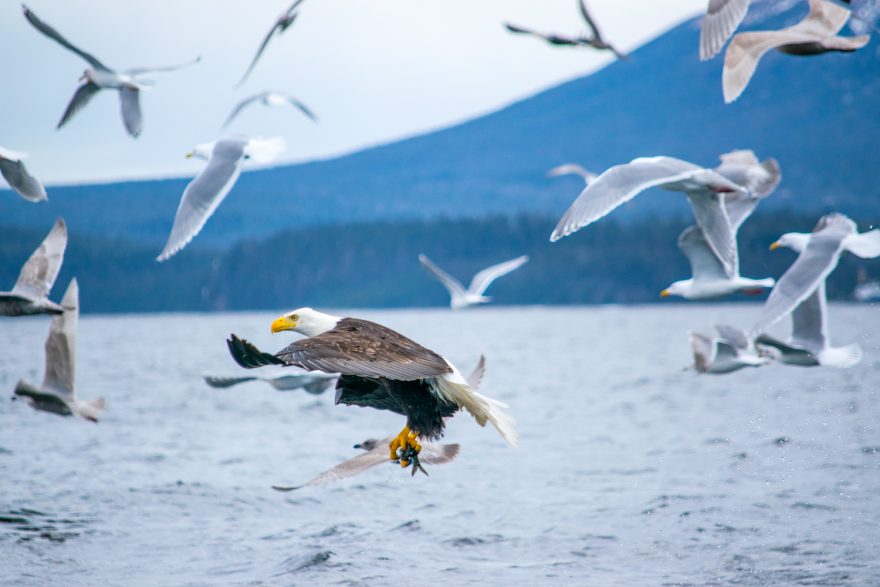 Seiners strategize their position and await the Alaska Department of Fish and Game countdown.

Sitka’s sac roe commercial fishery is legendary for cutthroat hustle. Spotter planes scope fish movement from above and dozens of seiners narrowly avoid one another, dodging rocks and whales as they compete for masses of herring.

This year, seiners harvested 9,758 tons of herring, about 66 percent of the quota. Fishermen target the golden herring egg sacks, or skeins, coveted in Japan as a traditional delicacy called kazunoko. Fish and Game estimates that 10.7 percent of the nearly 10,000 tons of herring pulled from Sitka Sound this season was the target mature roe. The subsistence harvest stands in stark comparison. Participants still target herring eggs, but the technique for accessing these eggs will leave the fish breathing. It’s a methodology defined by patience.

In quiet coves foaming with turquoise milt, participants lower hemlocks from small boats, anchoring them into the spawn. Days later, they return to pull in branches, hoping that thick layers of eggs coat the limbs. While the process sounds idyllic, the reality isn’t always quiet and serene. Like the commercial sac roe fishery, locals are in hot pursuit of this sacred resource. 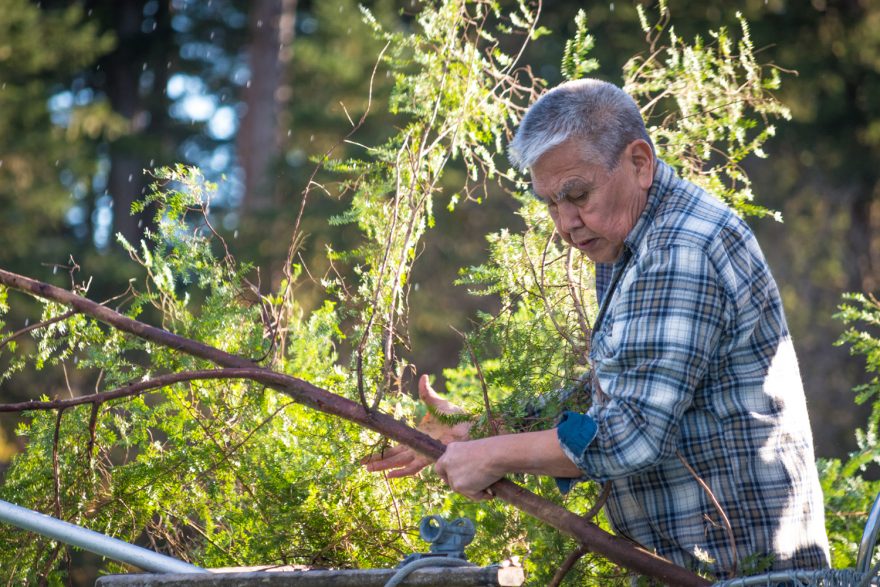 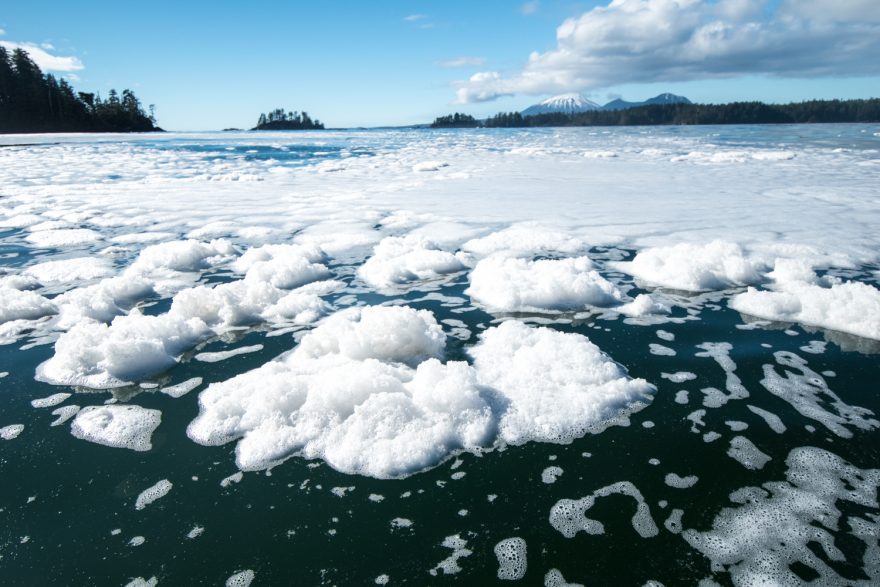 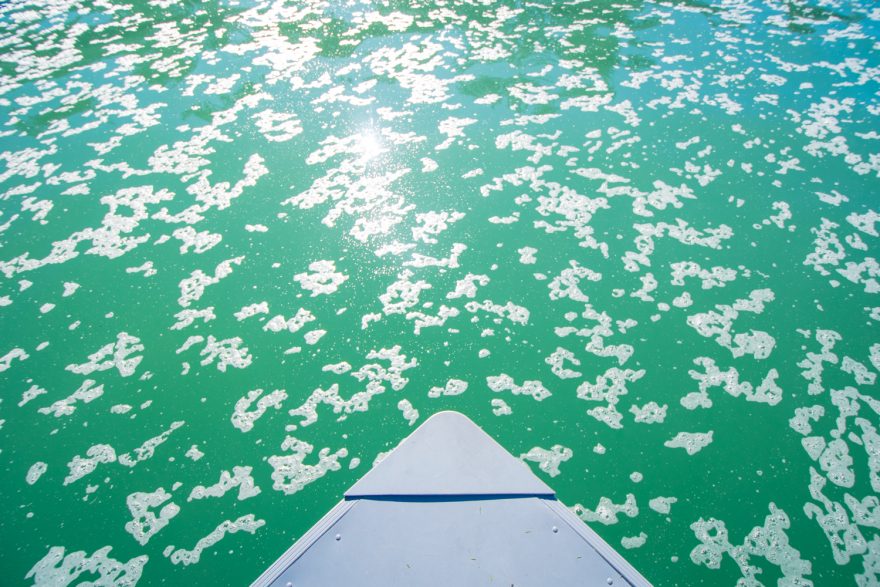 Sitka at heart of harvest

Martin and I pull the Raven up to a wooden troller anchored in a protected cove of Middle Island. The F/V Shirley N travels annually to Sitka from Hoonah.

Located on Chichagof Island, Hoonah is the largest Tlingit community in Alaska. Martin grew up in Hoonah and spent herring season traveling to Sitka on local trollers, gathering eggs. Today, Hoonah residents depend on Vernon Hill, a veteran troller with a local crew, to return with a hull weighed down by eggs on branches. The Hoonah Indian Association and community members contribute funds each year to support their travel. Martin reconnects with his hometown friends in the wheelhouse, while on deck Brandon Hill explains how a triumphant return to town looks.

“It’s crazy when we get back to Hoonah. Usually, we pull up to the dock and there’s about 200 people out there and we lay the eggs out on a tarp and watch people like seagulls fighting over this stuff. It’s just madness. It is really rewarding and it means a lot to a lot of people, especially elders,” Hill says.

Some people describe herring eggs poetically as the most culturally revered subsistence food after salmon. Others use a more crass nomenclature: Indian Viagra. Some people prefer to munch on egg-coated kelp pulled directly from the sea. Some blanch them, dress them with soy sauce or cook them in seal oil. Others kindly refuse.

Whether you like herring eggs or not, they are in demand across Alaska and Sitka is the beating heart of the harvest. Participants spend weeks gathering eggs, packaging and pumping thousands of pounds of this treat by boat or by box along airline arteries to eager families from Metlakatla to Barrow. Martin alone ships his bounty to Yakutat, Kake, Hoonah, Juneau and Angoon. 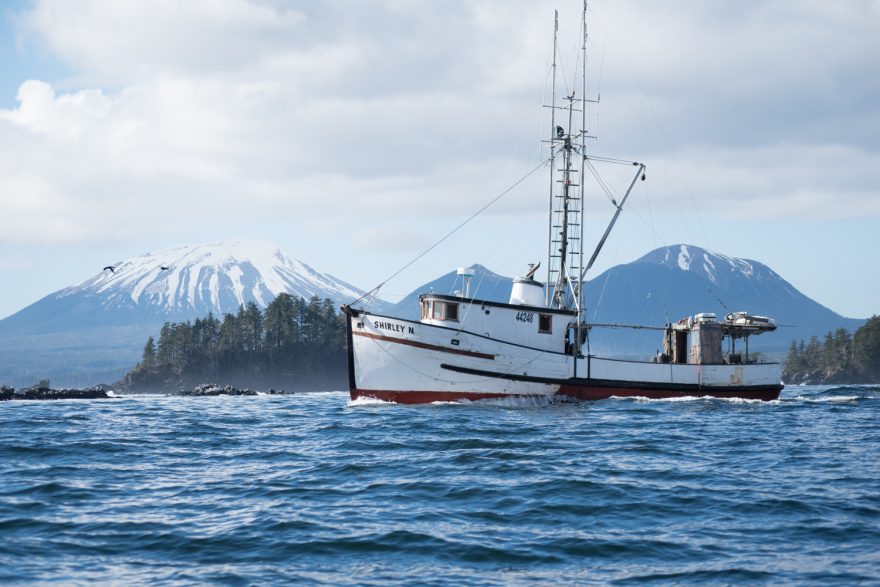 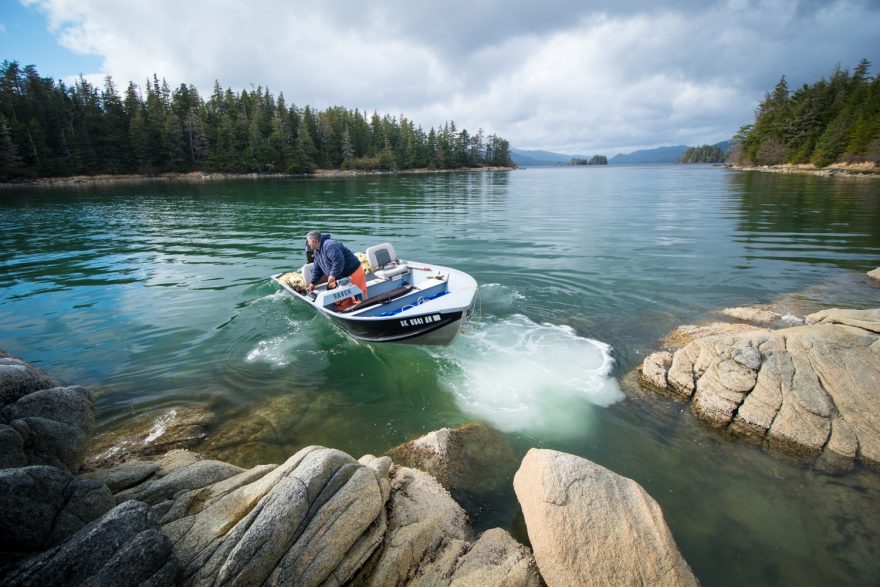 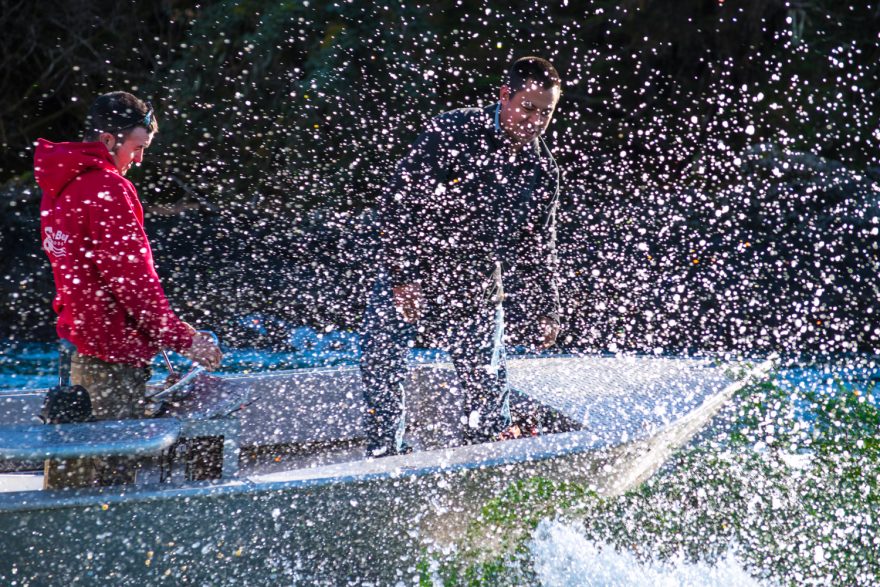 It’s Easter. While little girls in Sunday dresses play hide and seek with colorful eggs, I sip thick coffee and talk herring with the crew aboard the F/V Shirley N. Days earlier, we anchored branches in coves across Sitka Sound. Today, we hop on skiffs for a different kind of egg hunt.

Cutting through a cold sharp rain, Martin and I race to Crow Pass, an epicenter for herring egg subsistence. The turquoise foamy spawn has subsided, the water fading to a more familiar and less tropical shade. Peering past the raindrop-mottled surface, we look deep in the water for color. Martin does not attach buoys to his branches, fearing the egg wranglers — people who steal branches laid by others. He hides his branches and has done such a fantastic job that we struggle to find them.

“See that? That yellow glow down deep,” calls Martin. We drop a grappling hook and yank. A growing pale form rises to the surface, a young hemlock heavy with eggs. “Not ours!” The line, and anchor are unfamiliar.

Martin is many things, but he is not an egg thief.

“For me, this is all about honor. I honor my culture, honor where I come from, honor my father and honor this resource.” Thievery is not honorable. He loosens his grip and the tree slips back into the darkness.

We continue in this way for hours, though most of the trees we pull are ours. This year, however, most of those trees are empty. “Junk! Junk!” Martin says as he clips the small sections of tree worth keeping. “It’s getting worse every year. It’s getting harder to make this happen.”

We motor back to the Shirley N. All the sets the Hoonah crew pulled were empty. Barren hemlocks balance sadly on deck. Everyone is tired, feeling defeated. 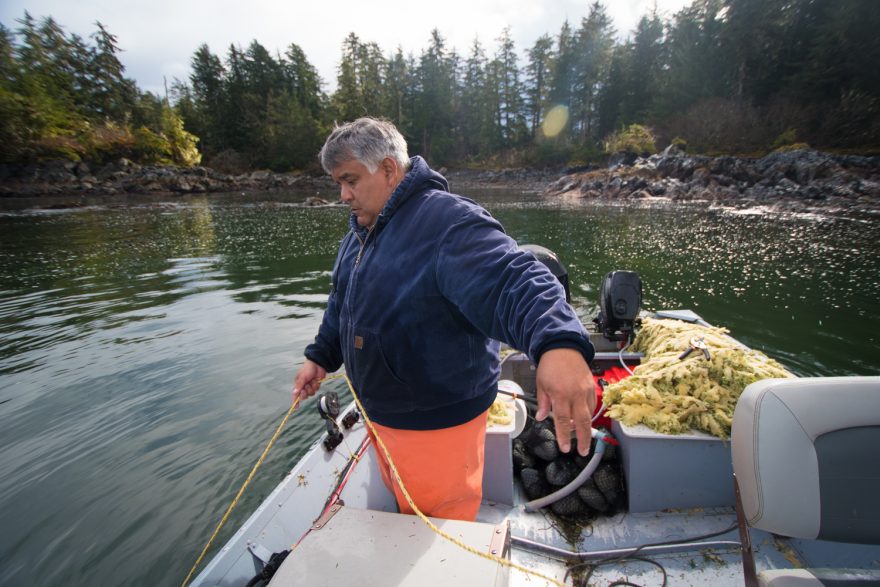 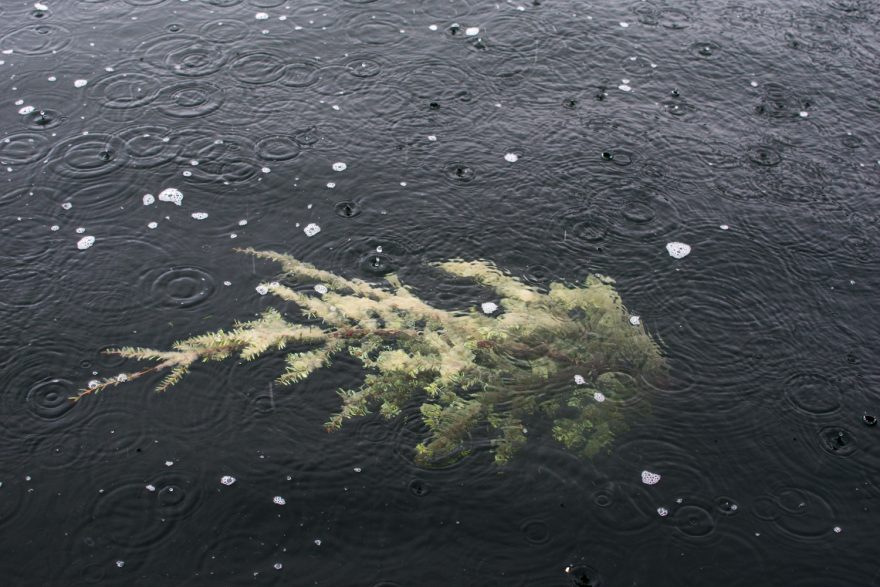 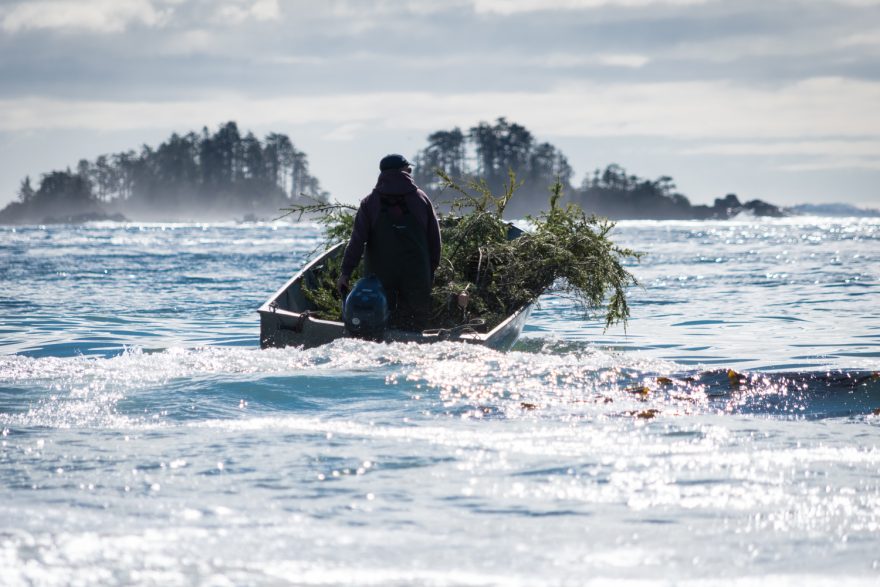 Martin and the crew of the Shirley N were not alone in their struggles this spring. Sitka Tribe distributed 3,240 pounds of this culturally revered resource, not even half of what they distributed a year ago.

Harvey Kitka, born and raised in Sitka, has been chair of the tribe’s herring committee for 10 years. “Harvesting … was really bad. Usually, I have so much that I distribute to not only family in town but some friends, too. We all have friends who don’t have boats; some of them are older … and we usually get eggs for them,” Kitka says.

He remembers a time growing up in Sitka when the herring were so thick that the crack of their flipping backs would echo across the Sound like a hailstorm. Back then, subsistence seasons were more reliable. “It used to be that the duration of the spawn was so long you could see which way the herring were heading, you could watch them every day as they got closer in town. We would try to get there right before the herring would start spawning, anticipating their movement.”

This season, the spawn seemed different.

“The herring came in tiny bunches, just scattered on the surface and there were just little balls of herring. It was just a little spot here and a little spot there,” Kitka says. “You had to be really lucky.” 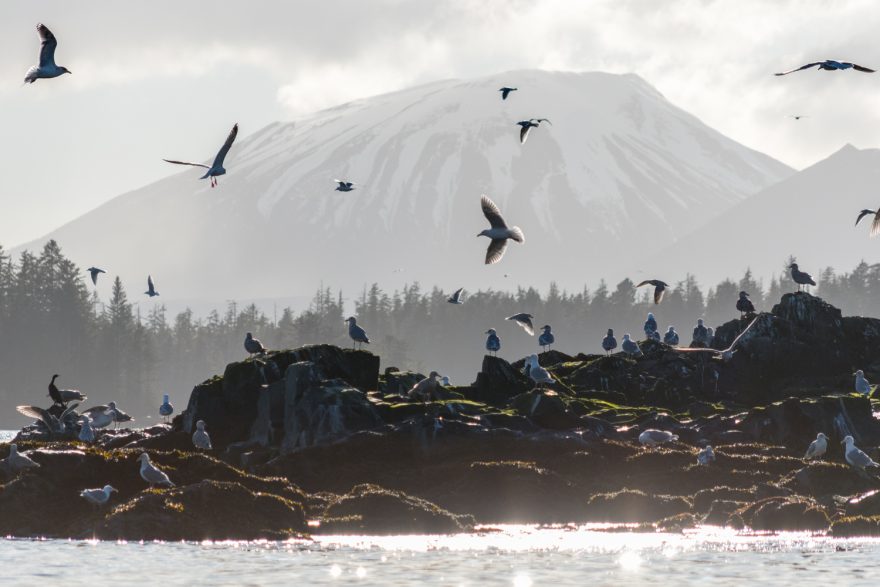 Back on the water, Martin and the Hoonah boys are determined to get lucky. By chance, while Martin and his buddy Russ James are hunting seals and otters north in Salisbury Sound, they stumble upon a late spawn. They move fast, lay branches and lead the Hoonah crew there to do the same. They all cross their fingers.

After weeks of battling waning optimism with die-hard persistence, the Hoonah crew and Martin taste salty, crunchy success. They pull plentiful branches from Salisbury Sound. The next day, I join Martin, James, his girlfriend Teresa Moses and her sons Eli and Andrew as they sort and package the spoils. The sun is bright, the atmosphere warm with relief and rejoice. 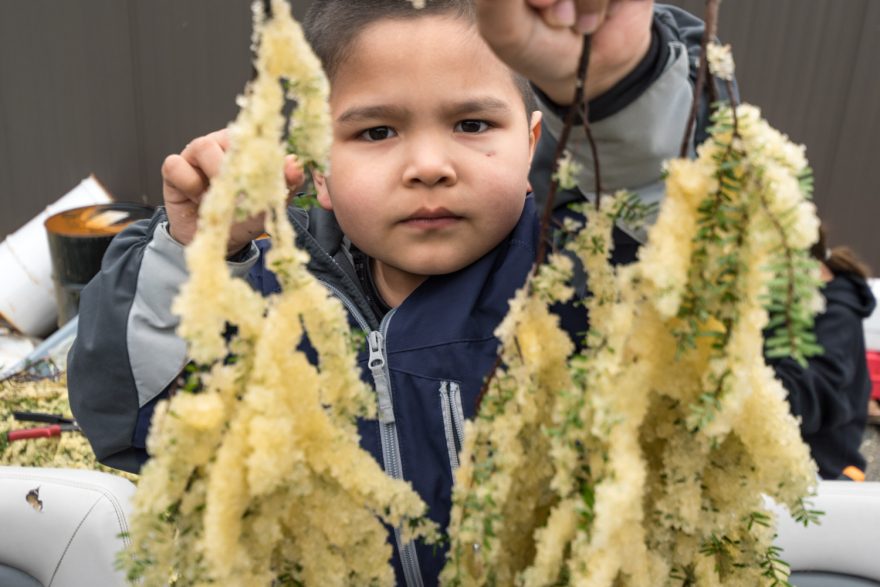 “I was pretty worried that I wasn’t going to be able to hold up my obligations, but now I’m very happy,” Martin says.  “I try to be honorable and honor my word. This was the first year I almost didn’t make my obligations. It’s getting worse every year. We all but gave up on this season and just lucked out and stumbled into it in Salisbury Sound, the farthest north I’ve ever had to go,” Martin says.

“I wish that we could have herring eggs every day,” one says. With a grin, their mother promises fresh eggs in tomorrow’s school lunchbox.

All together, Martin packages more than 2,000 pounds of herring eggs on branches. Four-hundred pounds are set aside for a particularly important purpose: Martin’s father passed away earlier this spring. These eggs will feed guests at a ceremonial party to honor Chief George Martin Jr., clan leader of the Chookaneidi. The rest are distributed to family and friends within Sitka and across the state. He pushes cartload after cartload through the gates at Harris Aircraft Services. He estimates these eggs will hit the tongues of nearly a thousand Alaskans.

“There’s not a lot of people who can do this anymore, and it’s my culture. A lot of people do their culture with dance and music. With me, it’s the thrill of showing people this, sharing whatever is in season,” Martin says.

In Hoonah, the community celebrated the triumphant return of their hardworking men on the Shirley N. Residents fought with fervor and glee over the thickest branches.

As spring tapers off into summer, Sitka’s residents wear down our winter weight, pulling skates and hooks heavy with halibut and salmon from the Sitka Sound. As we clean our bounty, we look graciously to our plentiful waters and curiously in the pink bellies of our chinooks. We are reminded of the little fish that begin it all, the shimmering foundation of our rich subsistence culture.

Read the full story and more about the Sustainable Southeast Partnership here.