Toxic Shellfish: How Can We Reclaim Our Beaches?

SCS is not involved with this project, but we are excited to highlight the exciting science our neighbors at the Sitka Tribe of Alaska are starting. We wish them sunny skies and toxin-free plankton samples! 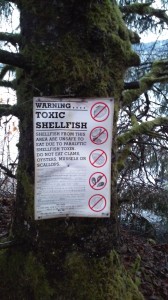 No Southeast Alaskan wild foods potluck would be complete without butter clams, blue mussels, or geoducks harvested from along our local beaches. Unfortunately, the fear of picking up shellfish contaminated with paralyzing or brain-damaging toxins, such as those found in a “red tide”, is enough to make most shellfish aficionados stick to the grocery stores. Luckily, subsistence and recreational shellfish harvesters got their first helping of good news this week at the Harmful Algal Bloom (HAB) conference organized and hosted by the Sitka Tribe of Alaska. Starting next week, seven tribes from Southeast Alaska will begin collecting and analyzing plankton samples from local beaches to use as an early warning system for toxic plankton bloom events. Within a few years, this species monitoring will be accompanied by direct testing of shellfish samples in the Sitka Tribe’s new lab. The end goal, although a few years away, is for subsistence Southeast harvesters to have the up to date information necessary to make an informed decision about the risks of harvesting on a given beach. At stake? An abundant, local, delicious, and currently underutilized source of protein. Let the testing begin! 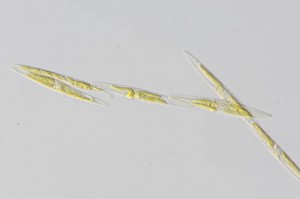 Many of us have heard of phytoplankton, but not many of us have a working knowledge of the different species or why they might be dangerous. Phytoplankton, or microscopic marine plants, are the world’s most important primary producers and are responsible for at least half of the global annual oxygen production. Microscopic oxygen-emitters floating through our oceans may sound like a dream come true, but phytoplankton are also capable of producing some of the world’s deadliest toxins. The HAB conference was introduced to Alaska’s three main phytoplankton villains: the diatom Pseudo-nitzschia and the dinoflagellates Dinophysis and Alexandrium. Pseudo-nitzschia produces domoic acid, a poison that targets brain cells and leads to permanent short-term memory loss known as Amnesic Shellfish Poisoning (ASP). Dinophysis is the most benign of Alaska’s toxic plankton and merely induces “food-poisoning on steroids”, or Diarrhetic Shellfish Poisoning (DSP). Alexandrium, the most well-known and feared species, produces saxitoxins that inhibit nerve function. This leads to Paralytic Shellfish Poisoning (PSP) and, occasionally, to death. Saxitoxins are so potent that they have been weaponized by the U.S. military and are classified under Schedule 1 of the Chemical Weapons Convention. 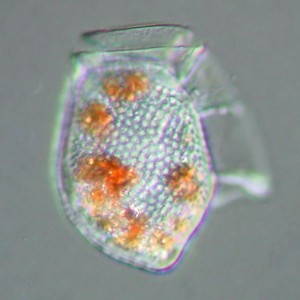 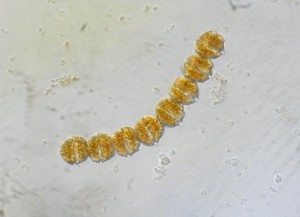 Toxins classified as chemical weapons are terrifying, but plankton are hardly alone among organisms in their ability to produce deadly poisons. The reason planktonic toxins in particular get so much attention is the ease with which they make their way into the human food chain. Plankton are filtered indiscriminately out of the water by shellfish. In a bloom situation, when one plankton species multiplies especially rapidly, any toxins produced can quickly accumulate to lethal levels in all of our favorite mussels, clams, scallops, and even in crustaceans. Humans are not the only species affected by high toxin concentrations in our seafood; sea lions and whales are known to have died from ASP while sea otters in areas with frequent Alexandrium blooms have learned to taste and spit out shellfish with high saxitoxin concentrations. 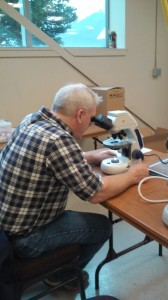 All this terrifying information from was almost enough to turn me off mussels forever. Thankfully the goal of the HAB conference was not to terrify the tribes in attendance, but rather to empower them to test their own beaches and ultimately to predict risk. That risk is real – in May of 2011, for example, thirteen people in Ketchikan and Metlakatla were admitted to the hospital with symptoms of PSP. But there is hope: in contrast to Southeast Alaska, where recreational shellfish harvesters are playing Russian roulette every time they eat a clam, Washington State has established a highly effective system of early monitoring and shellfish testing throughout Puget Sound. The HAB conference heard from Dr. Vera Trainer (NOAA) and Dr. Jerry Borchert (Washington Department of Health) about how they have coordinated a crew of volunteers and amateurs to make one of the most impressive, comprehensive, and up to date risk maps for the public to use.

Under the tutelage of NOAA scientists Dr. Trainer, Dr. Steve Morton, and Dr. Jennifer Maucher, the HAB conference attendees learned how to collect a plankton sample at a local beach (the primary site for the Sitka Tribe will be at Starrigavan), how to prepare a slide of that sample, and finally how to interpret and identify the organisms present under a microscope. As the attendees ogled at their water samples, they learned to measure the relative abundance of a species. They also learned how to collect and upload our data to a shared website so that all seven tribes involved in this project can see the results of the others. The goal of this plankton monitoring is to use plankton abundances to predict whether there will be a toxicity spike in shellfish in the immediate future. 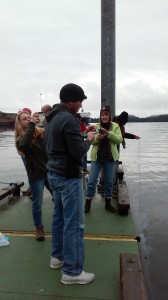 The Sitka Tribe’s program is modeled after Washington State’s, but the Washington program does have some important differences. First, Washington testers enjoy funding and support from the state’s Department of Health, support that shellfish testers in Alaska will not receive. That support means the Washington DOH can certify beaches as safe or close them to harvesting at any time. The Tribe will have no such authority. No one will be certifying beaches as definitively safe, nor will they be closing beaches that are deemed unsafe. It will be up to us as consumers to pay attention to the Tribe’s data. Secondly, Washington’s program currently consists of both weekly sampling of plankton and of direct testing of shellfish toxin levels. For now, the Alaska program will just consist of plankton sampling, with direct, weekly shellfish testing possibly a year or two away. 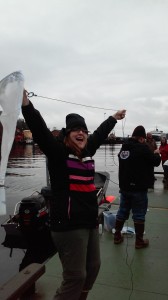 So if the beaches won’t be certified, and no one is going to be testing the clams I want to eat next week, and I’m not a member of the Sitka Tribe of Alaska, why should I be excited about this HAB conference as a casual harvester? Because this is the first step to what may in the not-too-distant future grow into a Washington-style risk-assessment program. Because coordination between seven far-flung communities in Southeast Alaska will likely give us some surprising insights on plankton movements and habits, and possibly on local currents. Because watching private citizens collect and interpret valuable scientific data may eventually spur the state to get involved. And because waiting a few years to know that your local shellfish are safe is definitely worth it when the alternative is to risk paralysis and suffocation, permanent brain damage, or (best case) horrible food poisoning. In short, we should all be excited because this is the first step anyone in Southeast Alaska has taken to reclaiming some personal ownership of a local food resource. Bravo and smooth sailing to the Sitka Tribe of Alaska!

Sitka Conservation Society Community Conservation Corps crew leaders and members pause for a photo along the Cross Trail, where they have revegetated and naturalized 1.3 miles of trail. Photo by Lione Clare. Like much of Alaska, the impacts of COVID-19 were felt throughout the Southeast—closing schools and businesses, cutting back...

Photo by Andrew Thoms In difficult and uncertain times, it is important for us to hold together as a community, and take precautions ahead of time, instead of doing too little too late.Right now, distancing ourselves from others may feel especially hard when compounded by the anxieties we are feeling...

Reflecting on the 4 H's – Hands