The Extra Tuff Campaign: Standing up for AK Salmon

I had never met Randy before, but when I left the Sitka Farmer’s Market this past weekend, I had his number, email, a $20 donation to the campaign I had been tabling for, lots of new ideas, and on top of all that, an ultimatum: “Get those stickers printed by next week or call me and I’ll get it done. Fishermen need to know about this. Mines on the Stikine? Jeez…”

He’d overheard me describing the Extra Tuff campaign I’m working on to some other market-goers and had come over ranting and raving. I had been selling someone a shirt with the phrase “For the love of salmon” on it, explaining that we’re trying to stand up against transboundary mines because what’s really at stake here are Southeast’s clean waterways and healthy fisheries. Into the midst of my current conversation, Randy barged:

“They’re mining the Stikine?! How come I didn’t know about this?!”

“Well, Inside Passage Waterkeeper, in collaboration with organizations like the Sitka Conservation Society, is organizing – ” I tried to get in…

“Have you gotten the Alaska Seiner’s Association on the phone?” Randy interrupted. “The gillnetters? The trollers? What about the fish plants? Huh?!”

From the way Randy was yelling at me, it might have seemed we held very contrary views. But I didn’t resent the outrage I was on the receiving end of. I understood, and respected, his passion. He’s been a fisherman out of Petersburg and Sitka for fifteen years. Although maybe more simplified and to the point, he’s a resident of Southeast Alaska, where a threatened watershed threatens a whole lot more; an entire way of life hangs in the balance. Randy may have been the most vocal, but he was far from the only concerned and incensed Sitkan that I talked to that day. 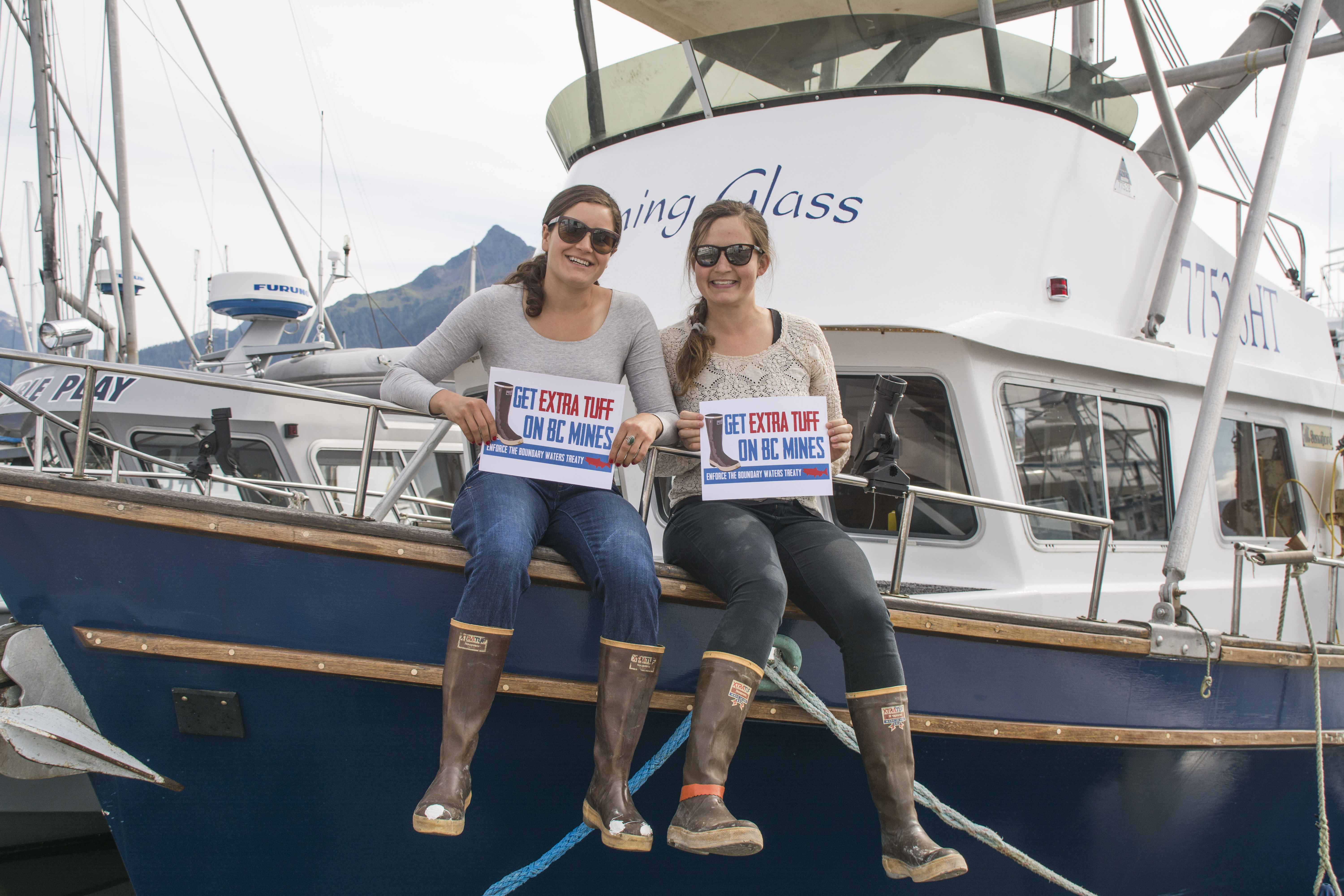 When I arrived in Sitka almost a year and a half ago, I didn’t much care for fish, as food or as fauna. Salmon is now the bedrock of my diet, as well as the lifeblood of the environment, economy, and community that I live in and love. From enjoying fish smoked underground in skunk cabbage per the traditional Tlingit way to king or coho I’ve done nothing more to than sprinkle a little dill and squeeze a little bit of lemon on, learning to appreciate salmon as a food source has not been hard to do. Neither has coming to appreciate, as well as deeply respect, salmon the species.

The more you learn about salmon, the harder it is, I think, to not become enamored of this creature. The mere mechanics of their lifecycle betrays an intuition or intelligence with which we, as humans, cannot compete. Their journey out to sea, their annual, like-clockwork, return to the same stream, their ensuing against-the-current swim, their spawning that gives rise to the next generation at the cost of their own lives – there is both a narrative poetry and a biological perfection to this sacrificial, self-replenishing lifecycle. As David Montgomery, the University of Washington professor, puts it: “When you think of all the resources that our descendants are going to really value in hundreds of years, a resource that fends for itself, that grows huge sources of proteins and omega-3s, that then swims home so you can harvest half of them, and that keep on replacing themselves, I mean, what kind of a gift is that? What kind of a species throws that away?”

And yet, we have been careless with this precious resource, investing in and pursuing developments that endanger for short-term gains a fish that has fed us since time immemorial. The folly of such actions became apparent with the disaster at Mount Polley last year, when the tailings dam on this British Columbia mine failed, releasing 4.5 million cubic meters of toxic waste into the Fraser River. The price of “progress” – often the justification for such misplaced, large-scale development – thus showed itself to be a destroyed watershed, a community that no longer could supply itself with water and fish, and recreational businesses that were forced to close shop. Yet the government and corporation that are responsible refuse to heed the lessons of the past. As of right now, BC is going ahead with plans to construct mines, one built by the same company and all comparable to the one that failed, in the headwaters of the Stikine, Unuk, and Taku, Southeast Alaska’s major salmon rivers. Although Alaskans of every stripe have made adamant cries against this, the US State Department and Governor Walker have avoided any meaningful action. The “Extra Tuff on BC Mines” campaign is our grassroots, citizen’s response to a pressing problem that those in power have proved, so far, inadequate at addressing. 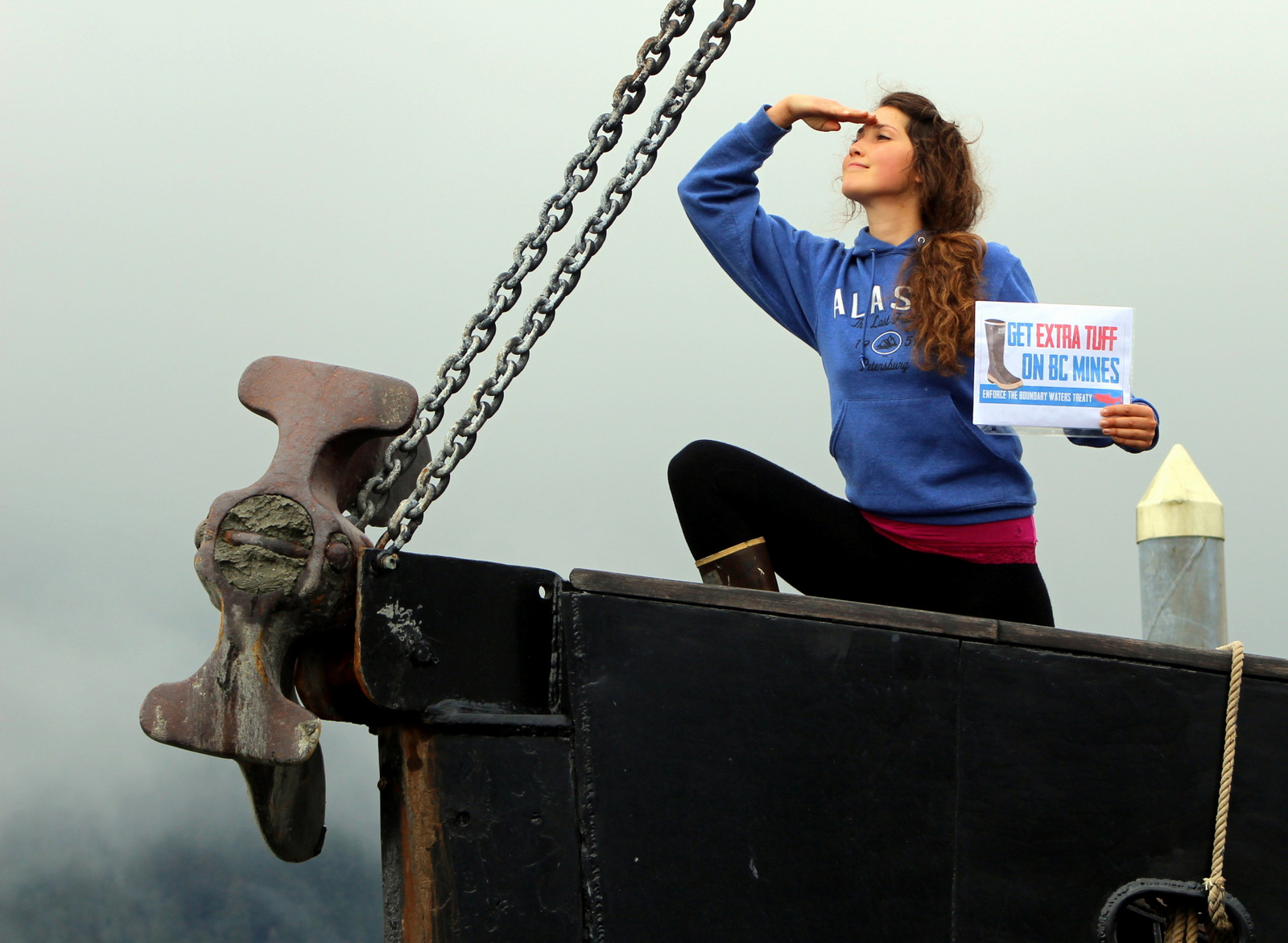 Alaska is the only place left in the world where efforts regarding salmon streams are not about restoration, but rather about preservation. As of right now, these streams do not need to be brought back to good health. They already exist as pristine and wild salmon habitat; as a place where revenue, culture, and life thrive, fed by the nutrients swum upstream by chum, sockeye, chinook, coho, and pink, all migrating home from the Pacific. Given this, our task should be a simple one. As Lee Spencer, a FishWatch observer, reminds us: “The great beauty of wild fish is we don’t have to do a goddamn thing for them, except leave them the hell alone.” The question we must be asking then, to my mind at least, is the following: Can we resist the urge to control and manipulate a nature we cannot improve upon? Can we exert the appropriate pressure upon others to convince them of the prudence, indeed necessity, of doing as much? Knowing what hangs in the balance, can we not?

The failure of the dam at Mount Polley was a disaster for nature (what was once an alive river now more resembles a lifeless, lunar landscape), but it was by no means a natural disaster. It was and remains a tragedy created by us, by people – people gripped by a historical amnesia that seems to rear its ugly head whenever the past would recommend against corporate profits at the environment’s expense. To quote David Montgomery again: “The beautiful thing about salmon is that they are incredibly resilient. If you give them half a chance they can come back in many ways, but you have to give them at least that half a chance.” Yet numerous independent experts and reports have said that the question is not if, but when, a tailings dam is going to fail again. As another person I spoke with at the market aptly put it, "The probability that we’re dealing with here is 1.” To go ahead with these mines at this point then, given their current deficiencies, is to not give salmon that half a chance. To go ahead with these mines is to practice a callousness towards salmon and the communities that depend on them, Sitka included. While we do not lie directly adjacent to these rivers, our fishing fleet and processors catch fish from them. Any mine failing would have effects that reverberate throughout the region.

Forestalling and fighting these mines will not be easy. It will require re-evaluating and exercising restraint with regard to our human impulse to develop; letting humility, not hubris, dictate our management of natural resources; calling upon our elected officials to use the legal measures and recourse at our disposal; and, above all, harnessing the collective will of citizens around Southeast to stand in solidarity with our salmon. Alaska is currently home to the last healthy salmon runs because we have proved ourselves capable of destroying these stocks in the past. We now have the chance to prove ourselves capable of saving them. Standing at Indian River, looking out at these fish fighting their way upstream to practice sacrifice for the next generation, it seemed crazy we could think of threatening a species from which we could clearly learn so much. 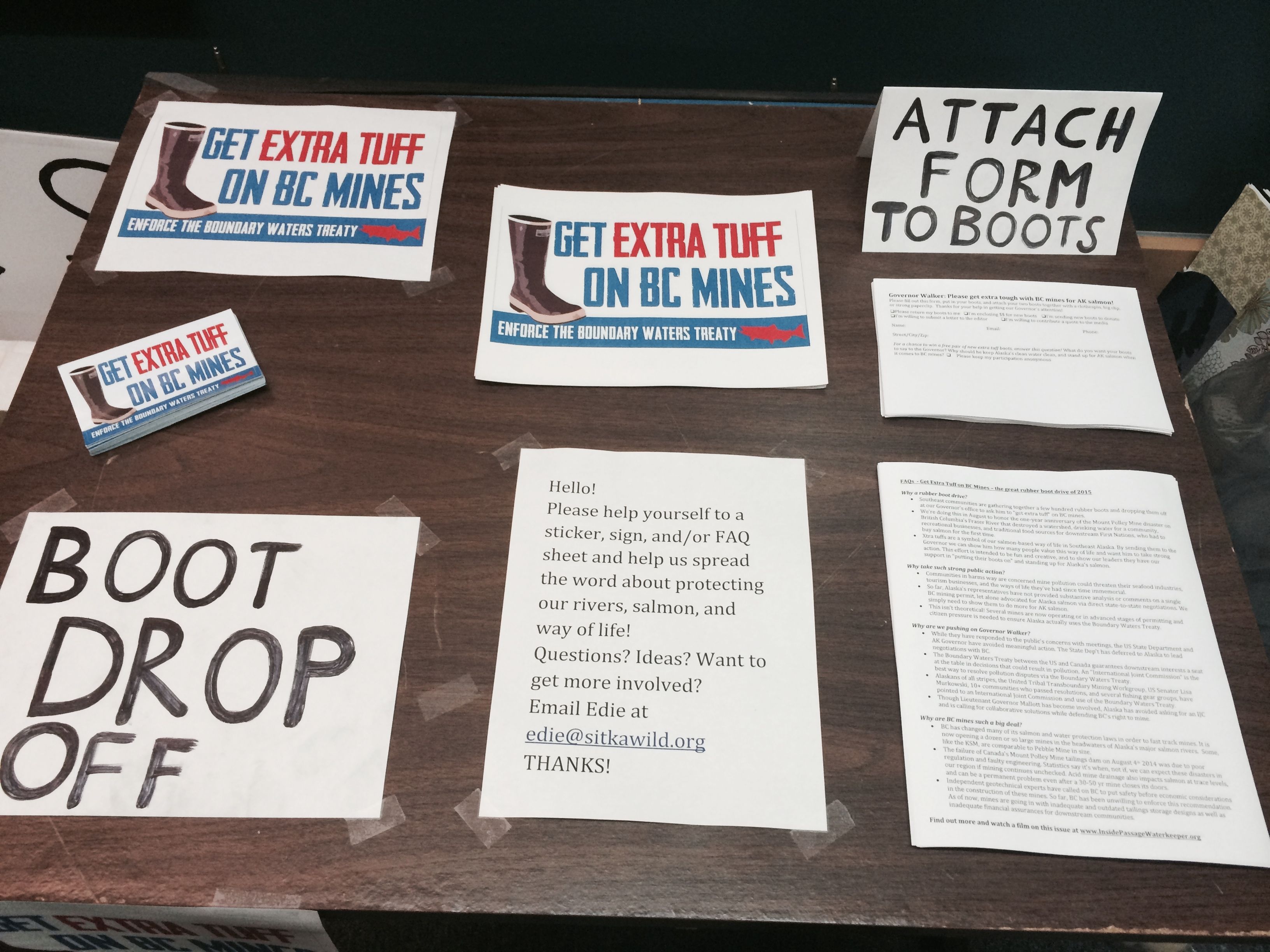 If you would like to get involved in getting Extra Tuff against BC mines, there are a number of ways to do so. The campaign is being coordinated by Inside Passage Waterkeeper, a non-profit out of Juneau, which is partnering with organizations and communities all across Southeast. The Sitka Conservation Society is one such organization that has joined in on the campaign, and is serving as a local boot-drop off location. With a two-fold mission, to protect the Tongass and support sustainable communities, SCS’s participation was only natural. Many of our advocacy projects revolve around protecting the salmon that nourish our forests, economies, and communities. Standing up against BC mines being built in the headwaters of our most important salmon streams was thus a project with which we were eager to lend support.

If you would like to donate boots or write a message to the governor, please feel free to stop by our office at 201 Lincoln Street, up the stairs to the right of Old Harbor Books.

More information can be found at: http://www.insidepassagewaterkeeper.org/extratough
Letters to the Governor can be submitted online here: www.bit.ly/getextratuff
RVSP for the Juneau rally and raffle at our Facebook page here: bit.ly/extratough
Read our story in the Sitka Sentinel at: http://sitkasentinel.com/7/2012-05-10-22-08-10/8994-august-14-2015-community-happenings
Any questions, ideas, comments, and emails can be sent to Edie at [email protected]!