Backwoods Lecture: The Other Route Across the Island

Adam Andis from the Sitka Conservation Society leads the Sitka Community Wilderness Stewardship Project. The project seeks to involve the community to monitor on-the-ground conditions in local Wilderness Areas. In the summer of 2011, the SCS Wilderness Crew spent countless hours bushwhacking in the field, including pioneering a new route across Baranof Island.

The route paralleled the southern boundary of South Baranof Wilderness Area and followed two watersheds from sea to source. To cover the terrain, the team used packrafts, lightweight backpacking techniques, and lots of chocolate.

Come learn a little bit more about your local Wilderness areas and join in the expedition Across the Island!

Click here to read the full report of the trip.[/box]

In the summer of 2010, the SCS Wilderness crew packed up and headed north for an attempt at circumnavigating Yakobi Island by kayak. The weather and health of the crew were not cooperating, so paddling around Yakobi was not an option. Instead, the crew traveled to Stag Bay across Lisianski Strait, which turned out to be a fantastic destination.

West Chichagof Wilderness has always been near and dear to our hearts here at SCS, in fact we probably wouldn't be here today if our founders hadn't fought for its protection (check out the whole history here). And we still protect it today, by monitoring on the ground conditions that lead to effective management decisions and give us a baseline to chart the health of the ecosystem.

In the summer of 2011, the SCS Wilderness crew spent 3 weeks aboard the S/V Paulette, captained by our good friend Ken Merrill traveling the entire coast-line of West Chichagof. Ben Hamilton of Pioneer Videography came along to document the trip. You can watch all of his videos below.

Be sure to check out the cave report and map of "Calvin Cave" here.

Late in the summer of 2011, Forest Service ranger Darrin Kelly and SCS volunteer Stacey Woolsey set out to Avoss Lake in the South Baranof Wilderness Area to collect data on Baranof' Island's goat population.Read the goat_research_flyerand the goat_trip_reportfor more information.

Sitka Conservation Society partnered with the Tongass National Forest to control invasive plant populations in the Stikine-LeConte Wilderness located on the mainland of southeast Alaska. The main objective was to control the spread of Reed Canary grass (Phalaris arundinacea).

Pleasant Island is located just one mile from the community of Gustavus and is used by many for recreation and hunting. SCS partneredwith Southeast Alaska Conservation Council and the US Forest Service to address the threats and problems to the Pleasant Island Wilderness Area.

[pullquote_right]Goldfishing- (adj.) 1. the act of completing a task half-heartedly 2. "half-assing" it Etymology: derived from the process of smoking a cigar by puffing out one's cheeks without inhaling the smoke.[/pullquote_right]One could characterize our hike from Rust Lake in the interior of West Chichagof out to the head of Patterson Bay as many things: ridiculously soggy, heinous bushwhacking, an exercise in patience, pathetically jovial, steep, slippery, but no one could ever characterize it as goldfishing, a term we arrived at after a long hiking day while smoking the fine cigars Andrew Thoms, Executive Director of SCS, sent with us.

Matt Goff, Kitty LaBounty and I flew into Rust Lake on the morning of June 8thunder bright blue skies, unloaded the plane and immediately took off to the alpine. One major intention of the trip, was to survey a band of Karst topography near Rust Lake. The Karst area is an erosional formation of a band of limestone bedrock that runs diagonally across Chichagof Island. The area is unique in the species of plants that can grow on it's unusual surface. Kitty and Matt were interested in comparing the presence and absence of a number of alpine plant species between the limestone and surrounding bedrock. As the pictures show, this area is a perfect subject area for comparison because of the obvious delineation between the two different bedrock regimes. We finished our 11 hour "day" hike by crashing, sliding, and bashing our way down the Karst ridge back to camp at around 9:30 pm.

Karst topography is formed when soluble bedrock, like limestone, is eroded away by slightly acidic water, such as rain. It can create some truly bizarre landscapes on both small and large scales. At the Rust Lake site, the Karst band abuts other mafic (characterized by high magnesium and iron (ferric) content) bedrock, making it a perfect site to note presence and especially absence of certain plant species.

Matt and Kitty spent the morning taking plant surveys along the gravel bars of the river flowing in to Rust Lake. Last year, Kitty had noted invasive dandelions along this stream. The population seemed small enough that manual removal may be an eradication option. This year, the population had grown slightly, but we still manually removed all dandelions we could find (approximately 200). We hope that continued hand removal and monitoring will prove effective in this area. After all the backbreaking, rugged, and dangerous work of weeding dandelions, I spent a good portion of the noon hours napping on the bank under the sun.

Peggy Marcus, Supervisory Natural Resource Specialist for the Sitka Ranger District of the Forest Service, and Lily Mihalik from Raven Radio in Sitka were scheduled to fly in on the afternoon of June 9th. As I napped, the winds picked up and the weather came in forcing them to reschedule for the next morning.

I called Forest Service Dispatch at 6:00 am: "Ceiling at 1500 ft, light winds from the South, good visibility". Rust Lake is in a bowl at about 870 feet. The Forest Service needs at least, 500ft of to fly into the lake. That didn't give much margin for error. After a couple of hours, Kitty, Matt, and I began calculating the amount of extra weight we would be carrying down to Patterson ourselves, since it seemed very unlikely Peggy and Lily would get through. As we debated, we heard a plane engine, and shortly thereafter saw the tiny float plane dive in just under the ceiling through the cut where the river flows out to the Pacific.

With Lily and Peggy in the field, we packed up camp and headed for our next camp, an alpine lake under another Karst band across the valley from the first.

After morning coffee on the 10th, we packed up and headed for Patterson Bay. The end of the alpine lake and the beginning of the slope to Patterson marks the boundary of the Wilderness Area. One can't help but wonder if the beautiful weather was directly related to being with in the wilderness boundaries, because as soon as we crossed the boundary, the rain began and continued throughout the day. Armed with aerial photos and GPS, the crew hiked down a very slippery and steep ridge into the valley bottom of Patterson. By late evening we had crashed and thwacked through more devils club and alder thickets we could handle, but we were still a way off from Patterson Bay. Finally, hungry and exhausted, we saw an opening in the trees.

Unfortunately, rather than finding Patterson Bay on the other side of the tree line, we discovered a massive beaver operation that didn't show up on our out-dated aerial photos. The slues created by the damming we too deep and to wide to cross. We circled around and plunged back into the devils club. After a while, apparently walking in circles, it started to get dark. Eleven hours of bushwhacking in the rain had drained us. We found a spot in the forest, built a fire, and set up camp. As Peggy, Lily, and I collected wood, Matt and Kitty scouted the way ahead only to find out that we were under a mile to the beach at Patterson!

In the morning, the weather had calmed down and we were hopeful for a successful float plane pick up. Finally on the beach, however, the wind changed and began gusting. The plane came over the ridge behind us and circled a number of times, contemplating the take-off potential in the current conditions. Satisfied, he landed. We took off again, into the margins of a squall. There were some initial bumps as testified by the bruises Kitty's fingers left on my leg, but overall the flight back to Sitka was smooth and beautiful thanks to the pilots at Harris Air.

Check out the radio stories of the trip on Raven Radio:

The expedition to Black Bay on West Chichagof was for the SCS crew to create a baseline for monitoring how well the Wilderness area was functioning. Read Bob Christensen's report below.

Red Bluff Bay is one of the most iconic places on Baranof Island. The area gets its name from the red, ultramafic (meaning high iron content) of the bedrock outcrop that marks the entrance of the bay. SCS's Wilderness Crew, accompanied by author Nick Jans, targeted the bluffs as a prime environment to survey for rare and sensitive plants. Red Bluff is also a popular destination for travelers and small cruise boats, so it was also important to monitor the base-line levels of human use to ensure that we don't "love this place to death."

Goulding Lakes are a series of three large lakes right in the middle of West Chichagof-Yakobi Wilderness area. In the summer of 2010, the SCS Wilderness Crew comprised of SCS staff and a number of volunteers, flew into the largest of the lakes with the goal of survey priority areas as they backpacked north to Stag Bay. Check out the video to see how the adventure unfolded. 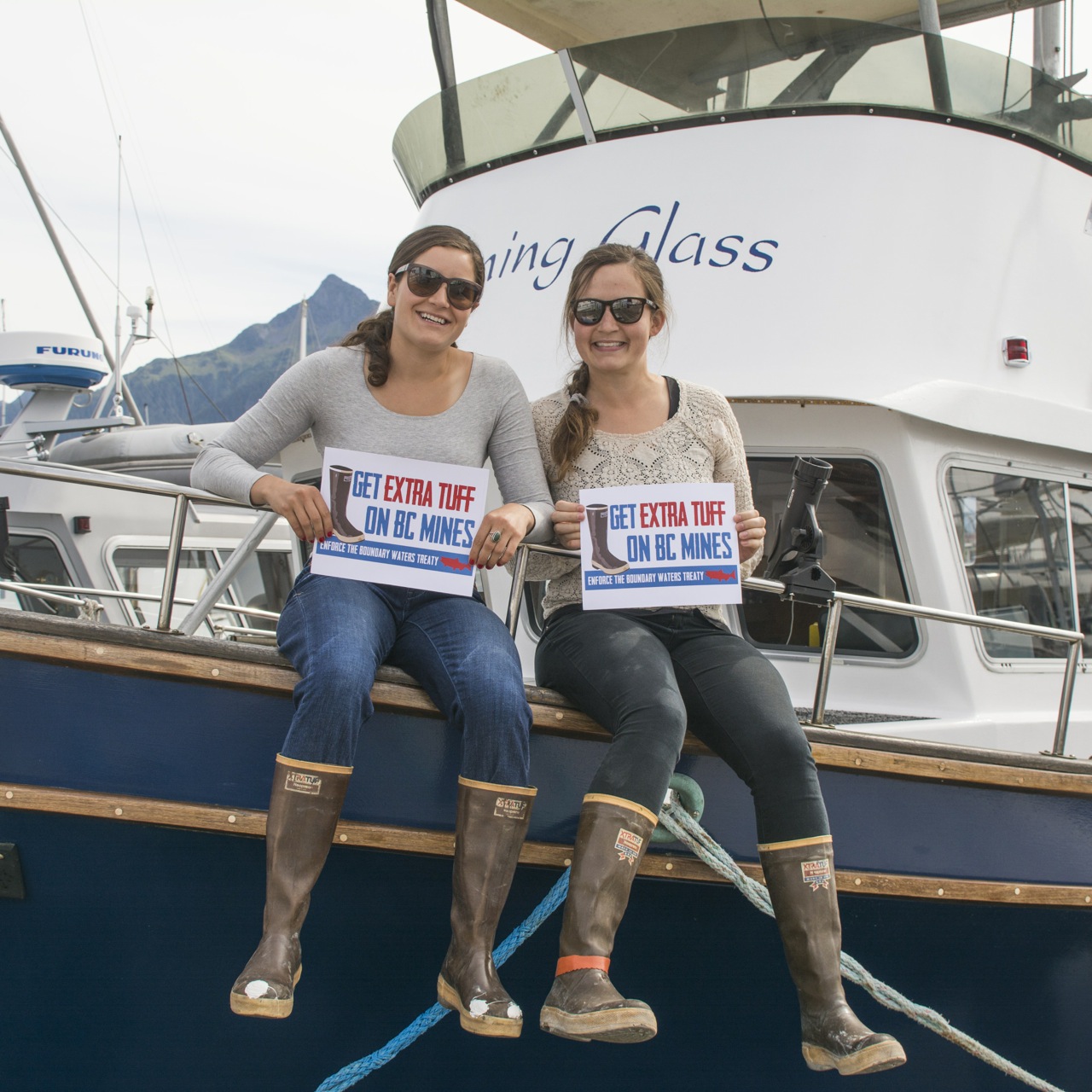 The Extra Tuff Campaign: Standing up for AK Salmon 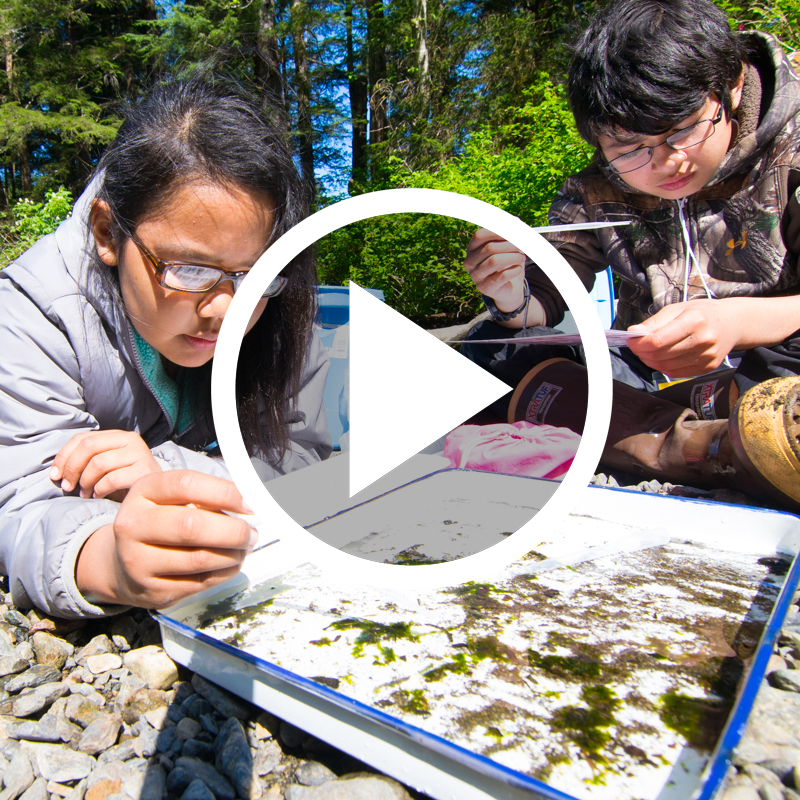 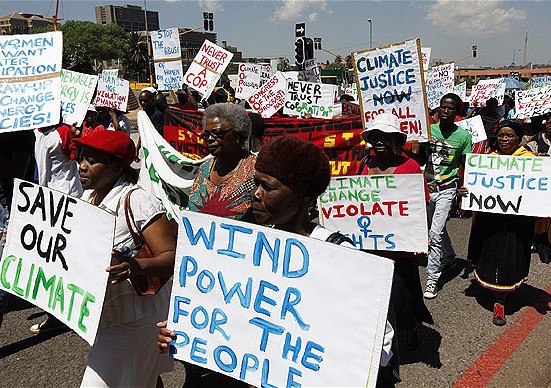 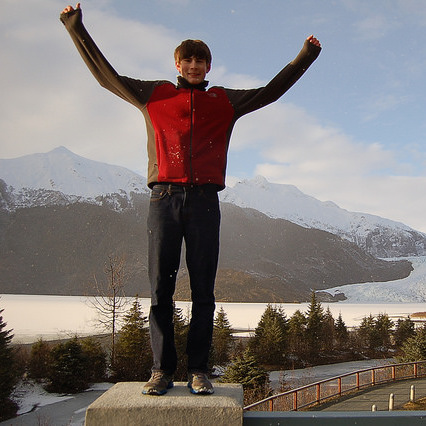