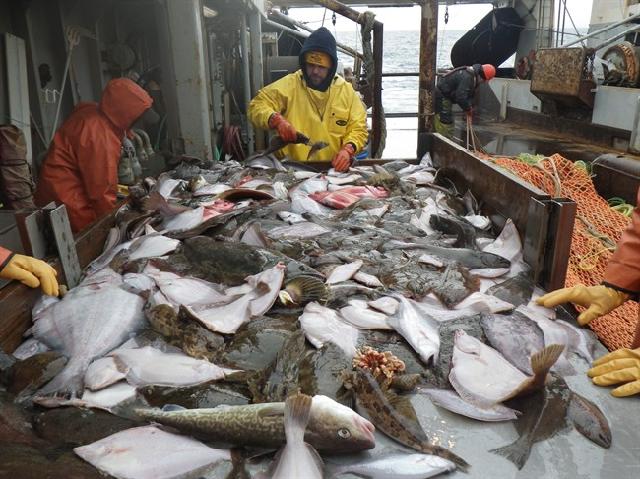 Every year, trawlers in the Bering Sea/Aleutian Islands (BSAI) management area catch and discard as much as 7x the number of halibut caught by commercial halibut fishermen in the same region! That halibut is going to waste is bad. That halibut bycatch allowances have not been appreciably lowered even as commercial halibut quotas have been slashed over the last fourteen years is even worse. That halibut bycatch is overwhelmingly juvenile fish who have not yet reproduced is perhaps the worst news of all.

But the Bering Sea is far away from our fisheries here in Sitka Sound, right?

In a word, no. Most juvenile halibut tagged in the Bering Sea are later recovered across the Gulf of Alaska. Some have even been recovered as far south as California. That means that what happens in the BSAI directly affects subsistence and commercial opportunities here.

Large amounts of halibut bycatch would be deplorable under any circumstances, but that's especially true when the populations are declining and trawl bycatch specifically removes immature population.

We have an opportunity to act!

The North Pacific Fisheries Management Council is meeting in Sitka from June 1st to June 9th. Write the Council a letter by May 26th asking for a 50% reduction in bycatch allowances. Need ideas? ALFA has posted a great halibut fact sheet. Comments should be emailed to [email protected] and should reference Agenda Item C2. You can also sign up to testify to the Council on June 4th or 5th. Find out more about commenting or testifying here. Be sure to attend the meeting to show your support for halibut!

SCS would like to congratulate the Sitka Tribe of Alaska for their success with the Federal Subsistence Board! For more good news about STA, read our previous blog post here. 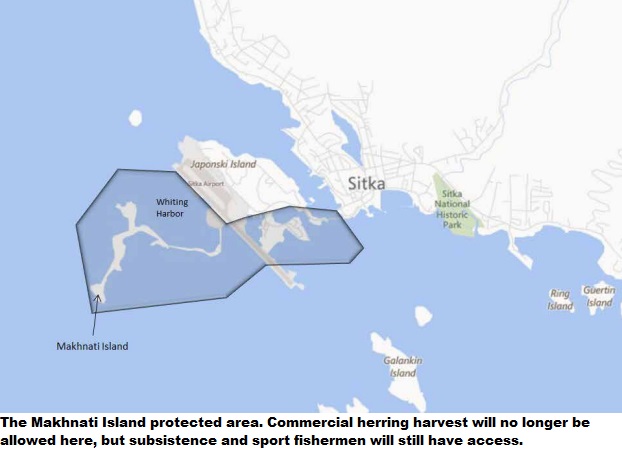 Herring making the swim to Sitka Sound this season have a new place to spawn safely: the federal waters around Makhnati Island. The Federal Subsistence Board approved FP15-17, submitted by the Sitka Tribe of Alaska, at their January 21-23 Anchorage meeting. The proposal closes ~800 acres of federal waters to commercial herring harvesters, although traditional and sport harvesters will still be welcome. But this isn’t a story of sport and subsistence desires trumping the sac-roe industry’s concerns - this new protected area is good news for everyone from fishermen to roe-on-kelp enthusiasts to the fish themselves. Think a win-win-win is impossible? Think again!

How could the exclusion of one group of herring harvesters from Makhnati Island possibly benefit everyone? Let’s start with the herring. Like other forage fish, herring are one of the primary pathways for energy stored in phyto- and zooplankton to nourish our favorite marine predators such as salmon. According to coastal archeologist Iain McKechnie, “They are the central node of the marine ecosystem. They aren’t the base, they aren’t the top, but they are the thing through which everything else flows.” Herring’s critical role in northern Pacific waters was quantified by the Canada Department of Oceans and Fisheries, who calculated that herring make up 62% of the diet of Chinook salmon, 68% of Coho's, 71% of lingcod's, and 32% of harbor seal's. Their impact isn’t limited to the waterline either. In British Columbia, coastal black bears, wolves, and shorebirds feed on herring eggs every spring. 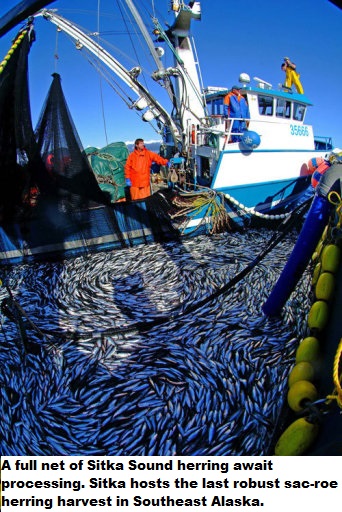 With everyone in agreement that herring are a cornerstone of marine and coastal food webs, you might think we would know everything there is to know about their populations and survival rates from year to year. Unfortunately, that is far from the case. Forage fish are characterized by high reproductive rates, transient populations, and high susceptibility to both top-down population forcing (e.g., too many predators) and bottom-up forcing (e.g., not enough plankton). From a management perspective, that means we have high levels of uncertainty about the number of returning herring from year to year. The Makhnati Island protected area will serve as a buffer against inaccurate stock assessments by providing a small refuge for herring to spawn relatively unmolested.

Besides the herring, the other obvious beneficiaries of the Makhnati Island closure are the traditional and sport herring harvesters. Traditional egg harvesters in particular should be excited since subsistence harvesters have only met their herring egg needs 50% of the time in recent years. Happily, Makhnati Island area is easily accessible to all Sitka residents. Sport fishermen will also benefit from decreased competition with commercial boats. 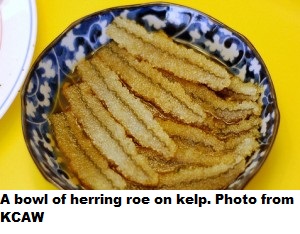 The real surprise is that the Makhnati Island commercial closure could be good news even for the sac-roe industry. Marine protected areas have been established by politicians from all political stripes, such as George W. Bush’s creation of the Pacific Remote Islands Marine National Monument in 2009 or President Obama’s expansion of that reserve in 2014. Part of the goal of those marine reserves is increase overall fish populations in waters open to fishermen. Sound far fetched? It’s worked before. The yellow tang population was crashing in Hawaii in 2000, prompting officials to close 35% of the available waters around the Big Island to tang harvesters. Only ten years later and with no reduction in closure areas, 70,000 more tang per year were being exported and the value of the fishery had increased from $745,000 to $1.27 million. Not a bad precedent for the herring industry to look to!

What's next for herring?

If you’re as excited about the potential positive effects of the Makhnati Island closure as we are, be sure to follow the happenings at the State Board of Fisheries at the end of February! Find the herring proposals here and submit your written or online comments to the Board by February 9th.