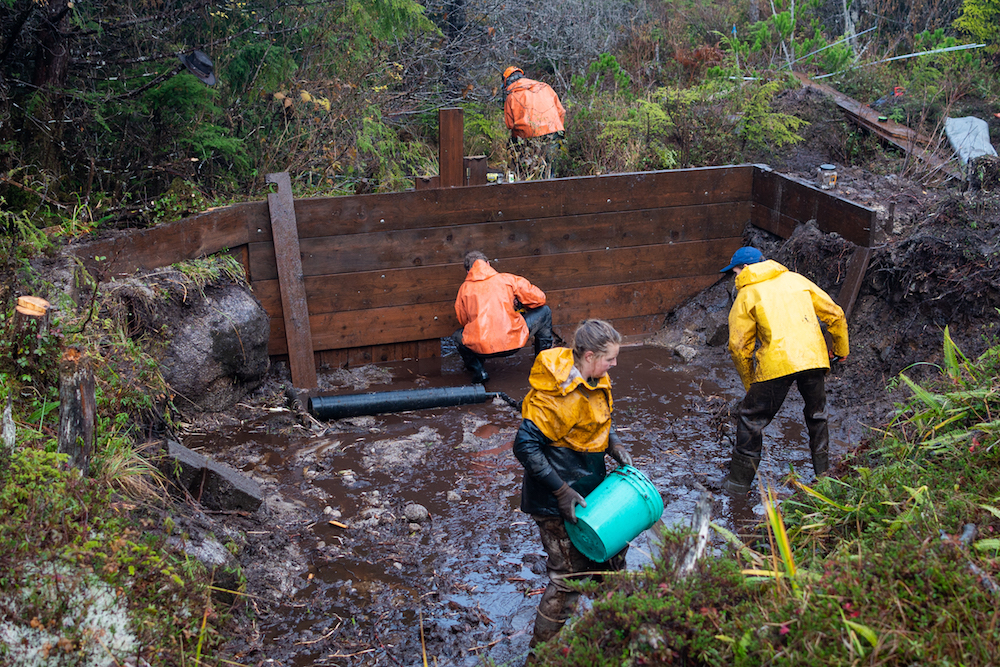 It was supposed to be a day trip. But, as is typical of late November in Southeast Alaska, Mother Nature had different plans.

While much of Sitka was still recovering from the hustle of Thanksgiving, naval architect Erik de Jong bustled around his workshop with haste, in preparation for another trip down to Goddard Hot Springs. After several delays due to weather and fabrications of materials earlier in the week, he was eager to return to complete the water delivery system improvements that the Sitka Conservation Society Community Conservation Corps had been tasked with completing, made possible by the City of Sitka’s allocation of CARES Act funding. The City of Sitka contracted Sitka Conservation Society to develop a transitional employment program to not only relieve the economic burden placed on individuals and families as a result of the Covid-19 pandemic, but also to create new community assets and alleviate the backlog of public works maintenance projects.

By headlamp, de Jong loaded up his boat with shovels and a Pulaski and tool bags and, crucially, a package of bacon. But this wasn’t just any skiff. It was the S/V Bagheera, a 52-foot steel sailboat that de Jong had built with his father during university in the Netherlands, where he grew up. Its distinctive black-and-yellow exterior shone in the cold, early morning, bobbing next to de Jong’s personal dock. 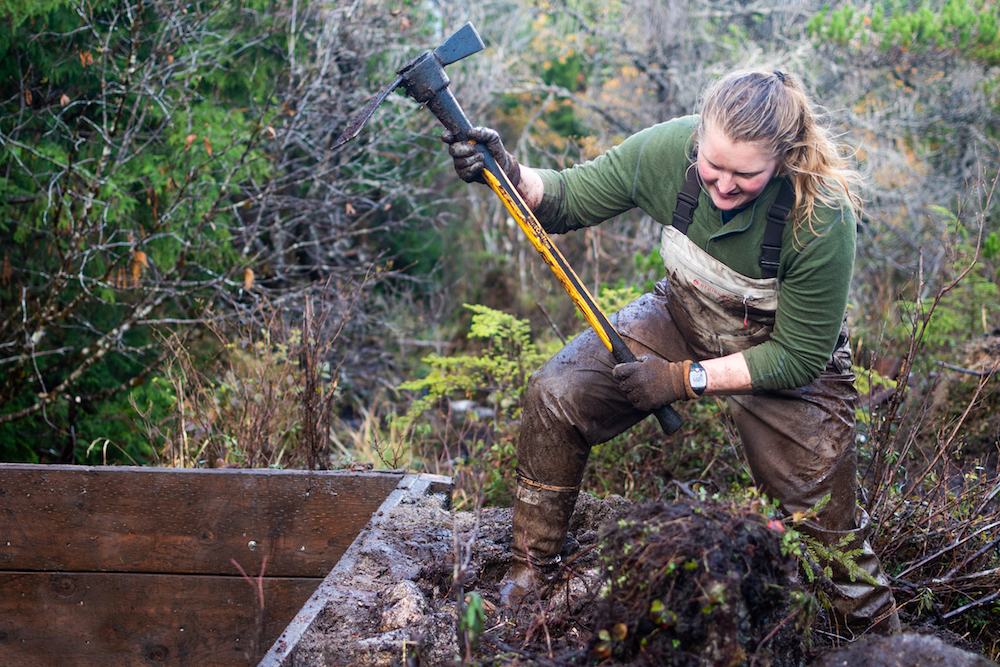 Along with Greta Healy, an SCS Corps member, Erik de Jong began the trip to Goddard Hot Springs. Located 16 miles south of Sitka, Goddard boasts two public soaking pools housed in cedar bathhouses maintained by the City of Sitka. Its proximity to town makes it an accessible and popular location for locals and visitors alike. The natural temperature of the hot springs, however, hovers around a scorching 150℉. An enjoyable experience, especially during warmer months, requires a supply of cold water to better control the tub temperatures. The small storage pond, behind a 30-plus year old dam of decaying wood, would regularly run out of cold water.

In an agreement with the City and Borough of Sitka, Sitka Conservation Society set out to design and construct a new wooden dam, tripling the capacity of the previous dam. Dan Jones and Dean Orbison, engineers in Sitka, and Barth Hamberg, a local landscape architect, were key to devising and planning the new and improved structure. Erik de Jong was hired on as the on-the-ground project lead.

Covid-19 negatively affected de Jong’s sailing business, preventing clients from travelling to Sitka and resulting in all of his chartered sailing trips being cancelled this past year. When the SCS Community Conservation Corps needed a project leader with a means of transportation for the Goddard project, de Jong’s wealth of experiences working in remote places and well-appointed sailboat seemed to be the perfect combination. Ever in motion and constantly eager to help out, Erik was just the type of person the City of Sitka was hoping to put to work through the CARES Act-funded SCS CCC. 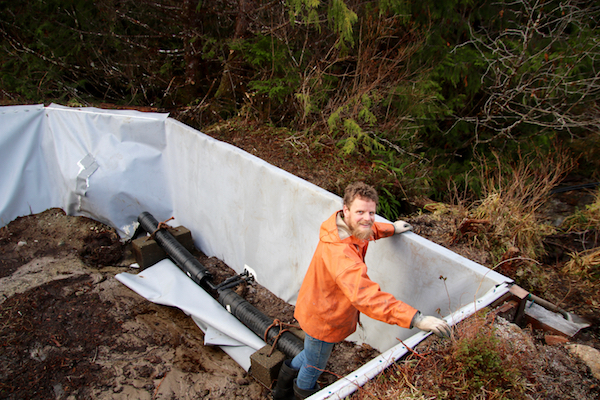 During a work trip to Goddard in late October, the Corps deconstructed the existing dam, brushed out vegetation to minimize sediment deposition, expanded the holding pool, and built a new, larger dam using nearly 1,500 pounds of lumber. The tools, building materials, and Corps members required for the multi-day construction effort were all transported on the Bagheera. However, after the initial work week, the dam still required a liner to prevent leaks and reduce subsurface flows.

And so, moments prior to departure in the early morning frost, de Jong found himself hoisting the final piece of equipment aboard—a 250-pound heat-welded liner, custom constructed and donated by Sitka’s CBC Construction Inc. Chris Balovich, owner of CBC Construction, chose to donate the liner, which otherwise would have cost several thousand dollars, for its value to many Sitkans.

“Goddard is important to the community as it is a good stop after a long day of hunting,” Balovich explained. “It really warms you up.”

With the hum of the engine melding with the soft lapping of the tide, de Jong and Healy set out into the gray morning. Once anchorage was dropped in Hot Springs Bay, the dinghy was loaded with materials and the crew set to work. The rest of the day was spent hauling the liner over icy wooden boardwalks where patrons of Goddard generously lent a helping hand. Once at the site, the two-person crew painstakingly installed the stiff, heavy liner along the dam, screw by screw.

Progress was slow but steady. By midafternoon, the sun was already setting but the liner was finally close to being secured along the dam’s wooden planks. Water, however, was still escaping from under the liner. Undeterred, de Jong secured his tools at the worksite and plans to return and finish the next day were made. 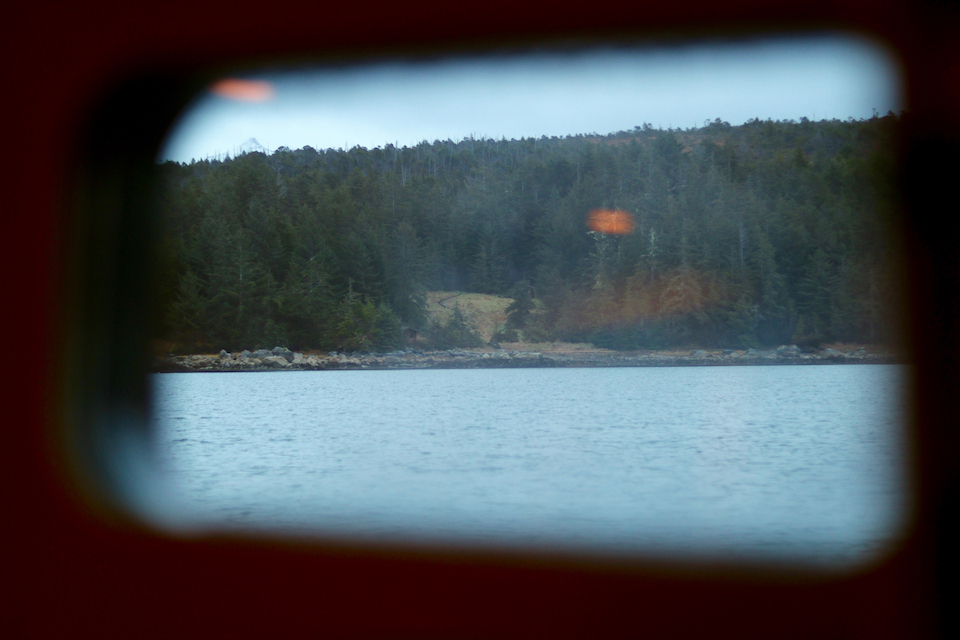 The next day brought about little work. Instead, gusts of 70 knots rocked the Bagheera for the better part of the work day. Valuing safety first and foremost, de Jong spent the morning cooking up bacon pancakes before cozying up to a triple feature from his extensive movie collection—an apparent prerequisite of sailboat ownership. As evil child-eating giants were defeated in The BFG, heavy rains thundered down upon the Bagheera’s hull.

In the drizzly, but calm, morning that followed, de Jong began work in earnest. He and Healy set to work in ankle-deep water, weighing down the edge of the liner using heavy rocks and shovels full of earth. Gradually, the cold water tank’s water level inched higher and higher. By early afternoon, de Jong was chest-deep in the chilly pool of muddy water. With a final few flourishes, their work was complete. 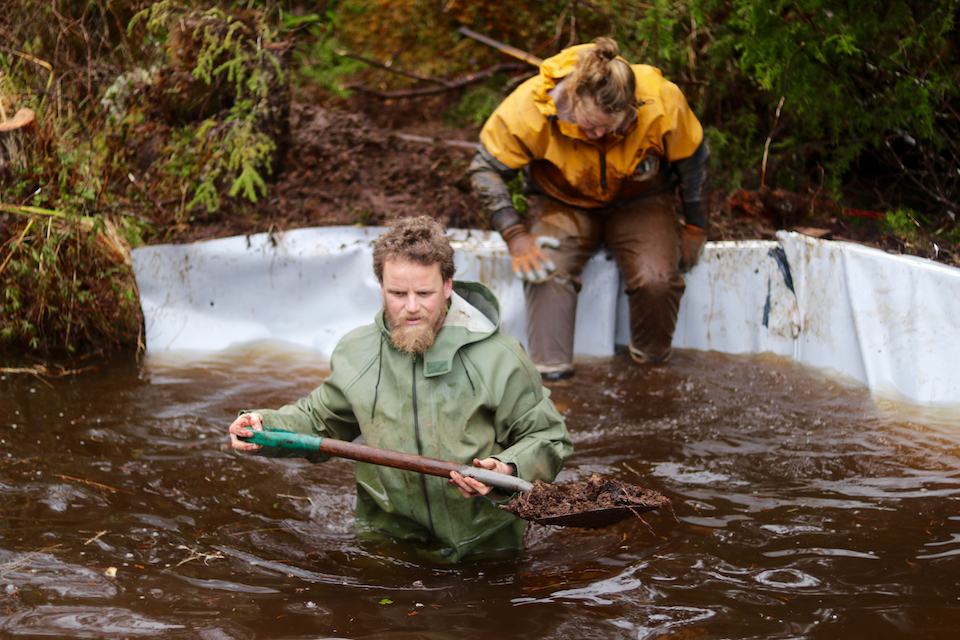 The day trip-turned-weekend work trip, replete with stormy seas and plenty of setbacks, was finally a success. The Goddard Hot Springs renovations exemplify how difficult and unpredictable field and construction work can be in Southeast Alaska. Nonetheless, SCS and the City of Sitka took on this challenge and many others because of the need for employment opportunities. This is just one of a dozen projects the SCS Community Conservation Corps took on this season, employing nine Sitkans and a dozen contractors like Erik and working on important community assets on City property. 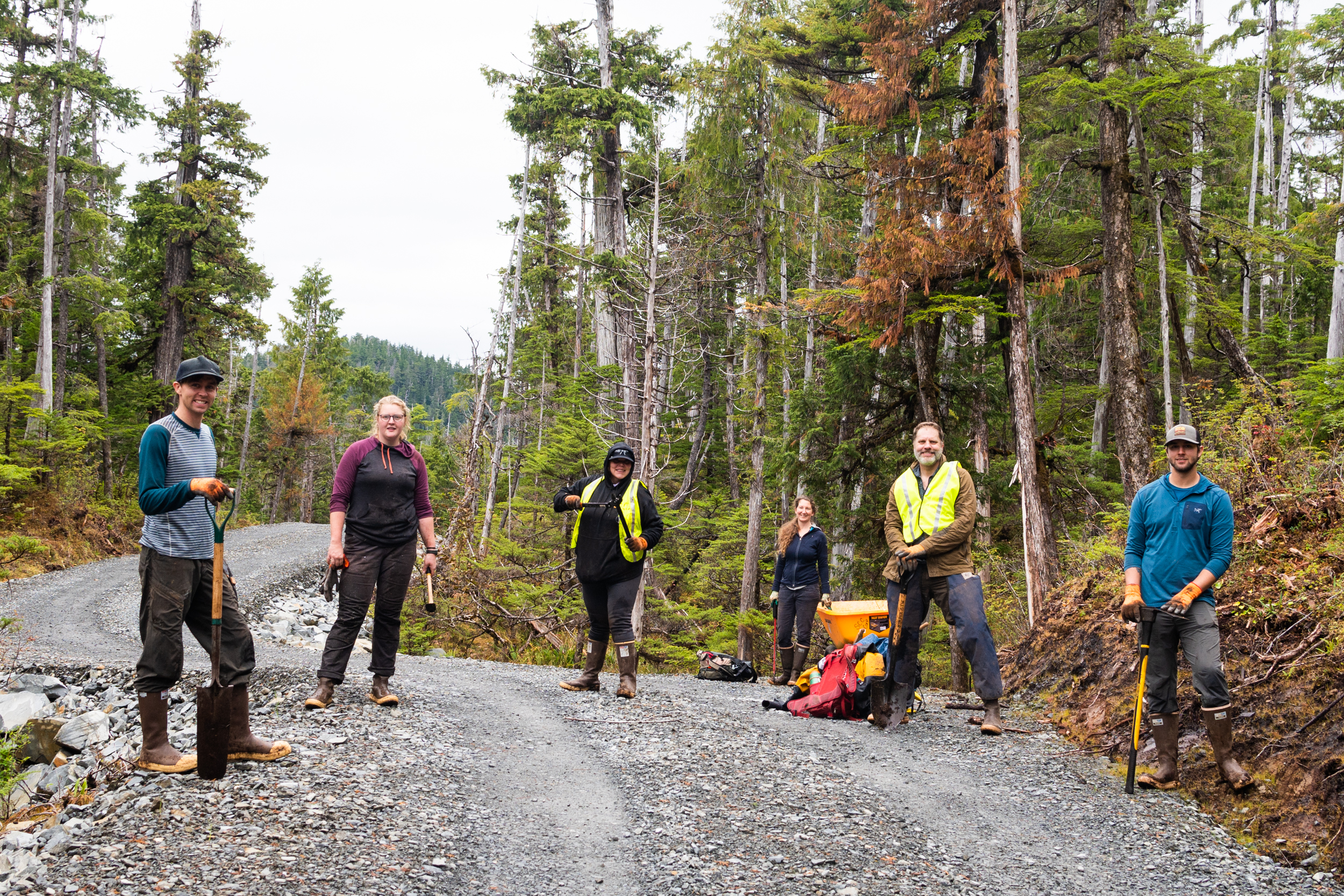 Sitka Conservation Society Community Conservation Corps crew leaders and members pause for a photo along the Cross Trail, where they have revegetated and naturalized 1.3 miles of trail. Photo by Lione Clare.

Like much of Alaska, the impacts of COVID-19 were felt throughout the Southeast—closing schools and businesses, cutting back transportation between communities, and increasing food insecurity. Employment opportunities, too, became harder to come by. Earlier in 2020, the pandemic caused unemployment to spike to 14.7% nationwide. According to economic development organization Southeast Conference, Southeast Alaska lost 17% of jobs in the region, making it the most economically impacted region in Alaska. In Sitka, the third largest community in Southeast Alaska, a challenging fishing season was exacerbated by low harvests and reduced global demand. This, compounded with the economic losses due to COVID-19 within the transportation, tourism, and retail sectors, led to a great need for economic relief and employment opportunities in Sitka.

Sitka Conservation Society, a non-profit that seeks to both conserve the natural environment of the Tongass National Forest and support sustainable development within communities across Southeast Alaska, identified employment and economic needs in Sitka and stepped up to help. Sitka Conservation Society partnered with the City and Borough of Sitka to establish the “Community Conservation Corps,” a transitional employment program aimed at stimulating the local economy and building local workforce by giving jobs to unemployed, underemployed, and furloughed workers. 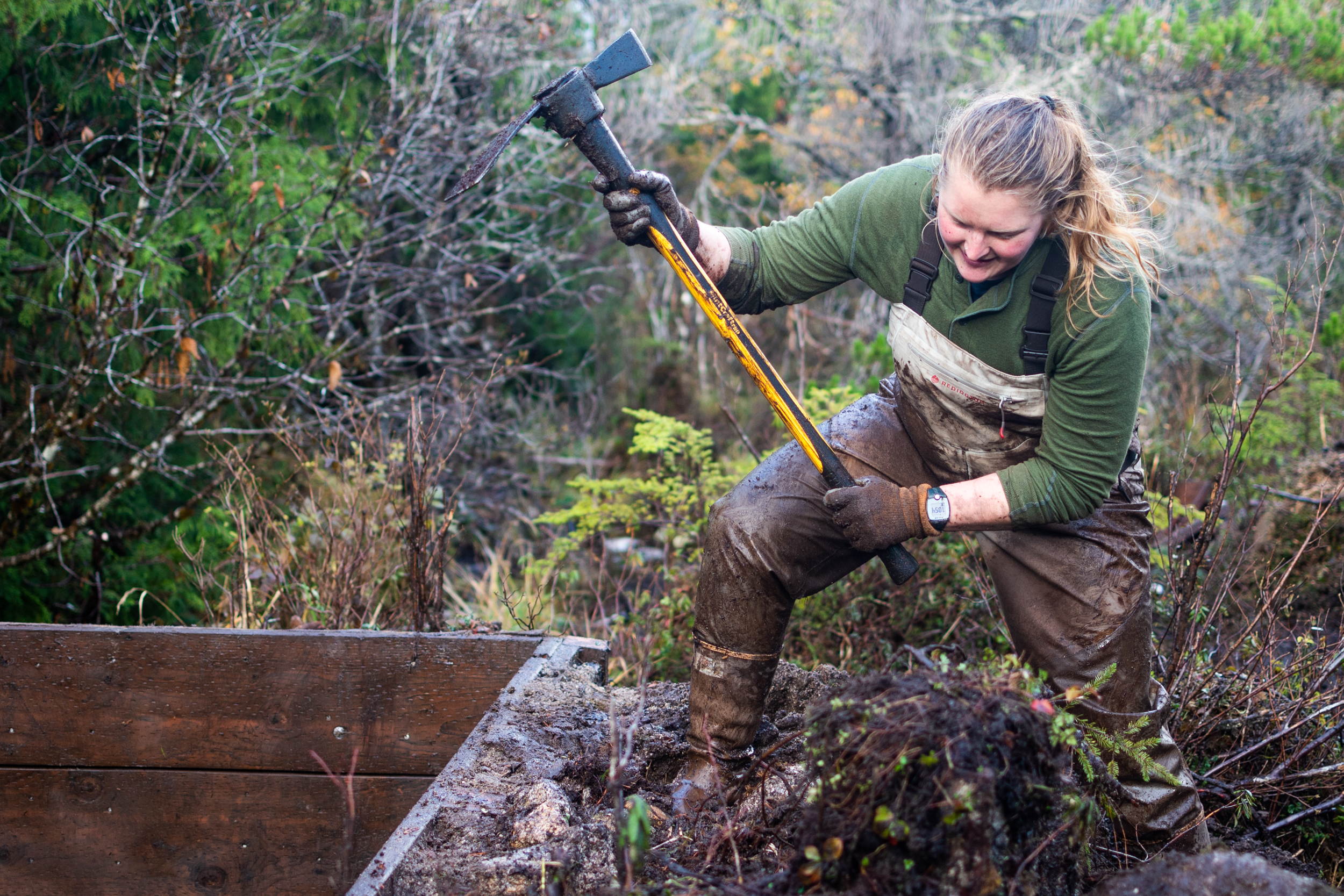 Corps member Greta Healy works on clearing the area next to the dam. Work continued through several inches of rainfall over the week. Photo by Lione Clare.

Despite the incessant rain and wind, dropping temperatures, and shortened days that accompany fall in Southeast Alaska, the SCS CCC took on a multitude of projects, ranging from cemetery maintenance to mountain bike trail construction to engineering improvements for a popular local hot springs (see list below). Through the program, SCS hired two Corps leaders and six Corps members who had all been impacted by the COVID-19 pandemic. In addition, several contractors and local organizations who have also been impacted were also hired for their expertise as consultants or to provide services. Community non-profits were also hired to provide workskills and specialized training to help Corps members develop additional skills. The Corps program launched in September and will continue until the end of the funding period in late December. Prior to beginning work, SCS also developed general work safety and COVID-19 protocols to maintain the safety of Corps members and to minimize spread of COVID-19 in Sitka. 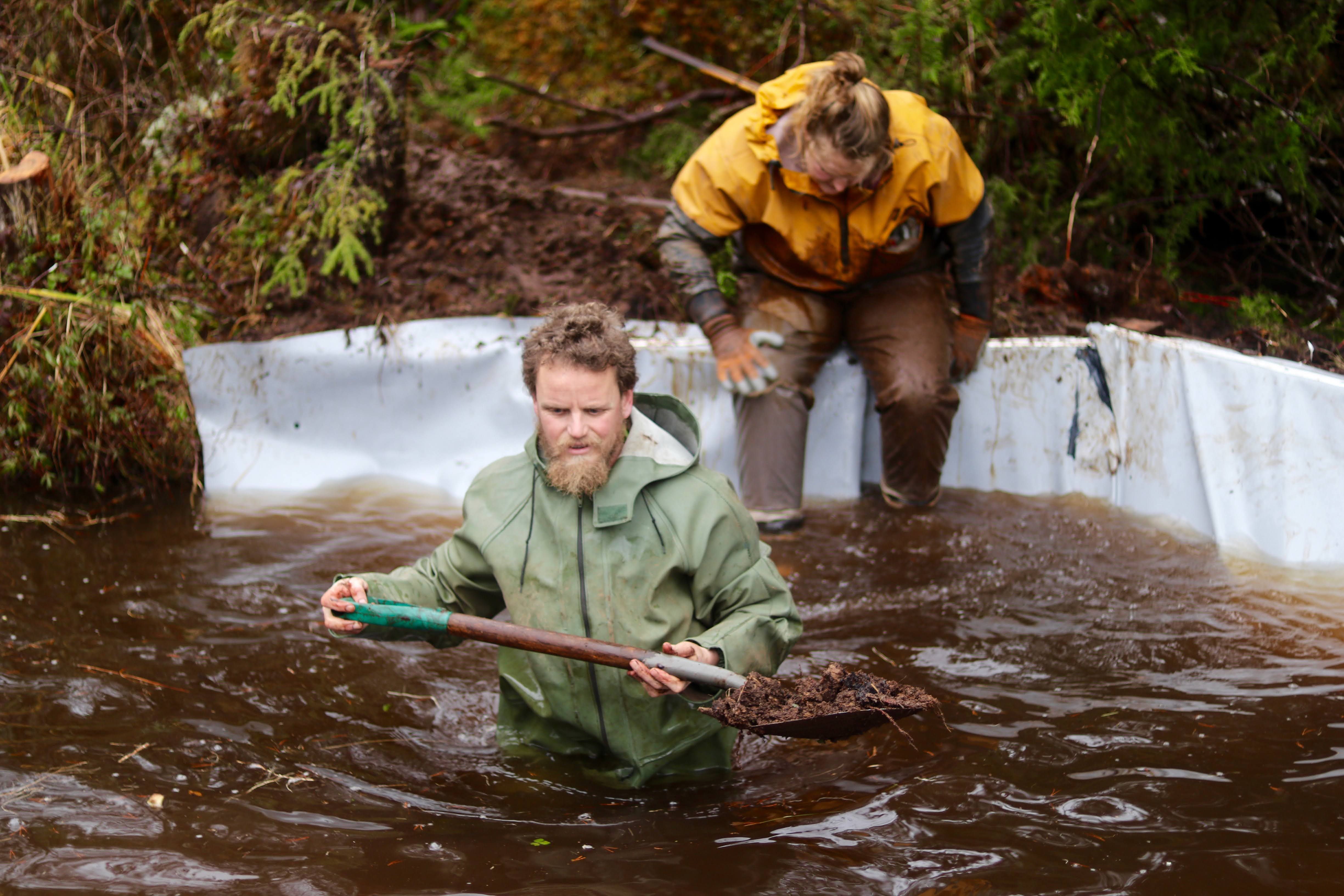 Corps project leader Erik de Jong, owner of Bagheera Sailing, wades through the cold water storage pool to place finishing touches on the dam liner. Corps member Greta Healy is pictured behind. On this work trip, the crew endured gusts of over 60 knots during a storm they waited out. Photo by Amy Li. 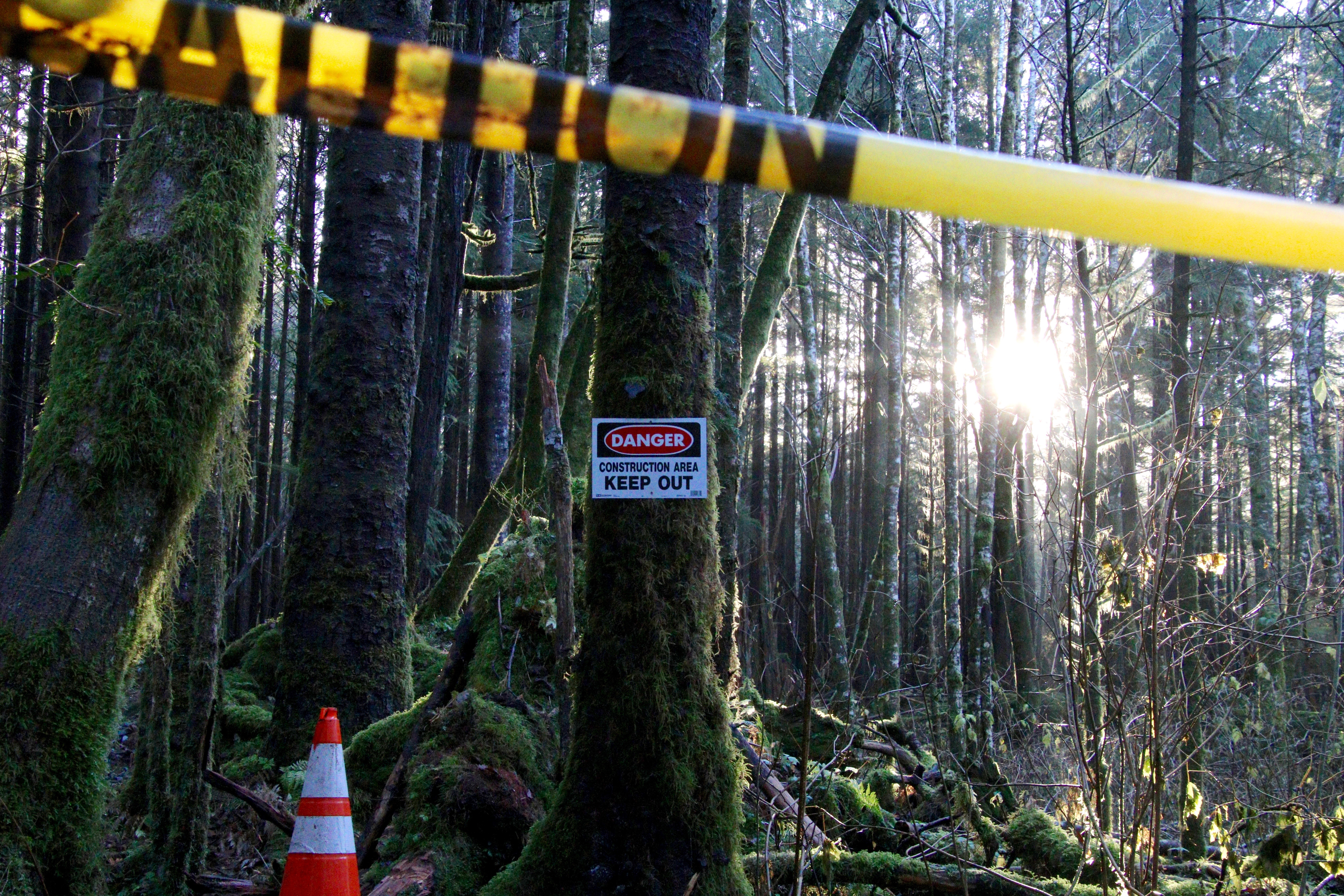 Constructing the mountain bike trail involved clearing the path of obstacles and brush, building a corduroy foundation with logs, and covering it with gravel for draining and tread. Photos by Amy Li. 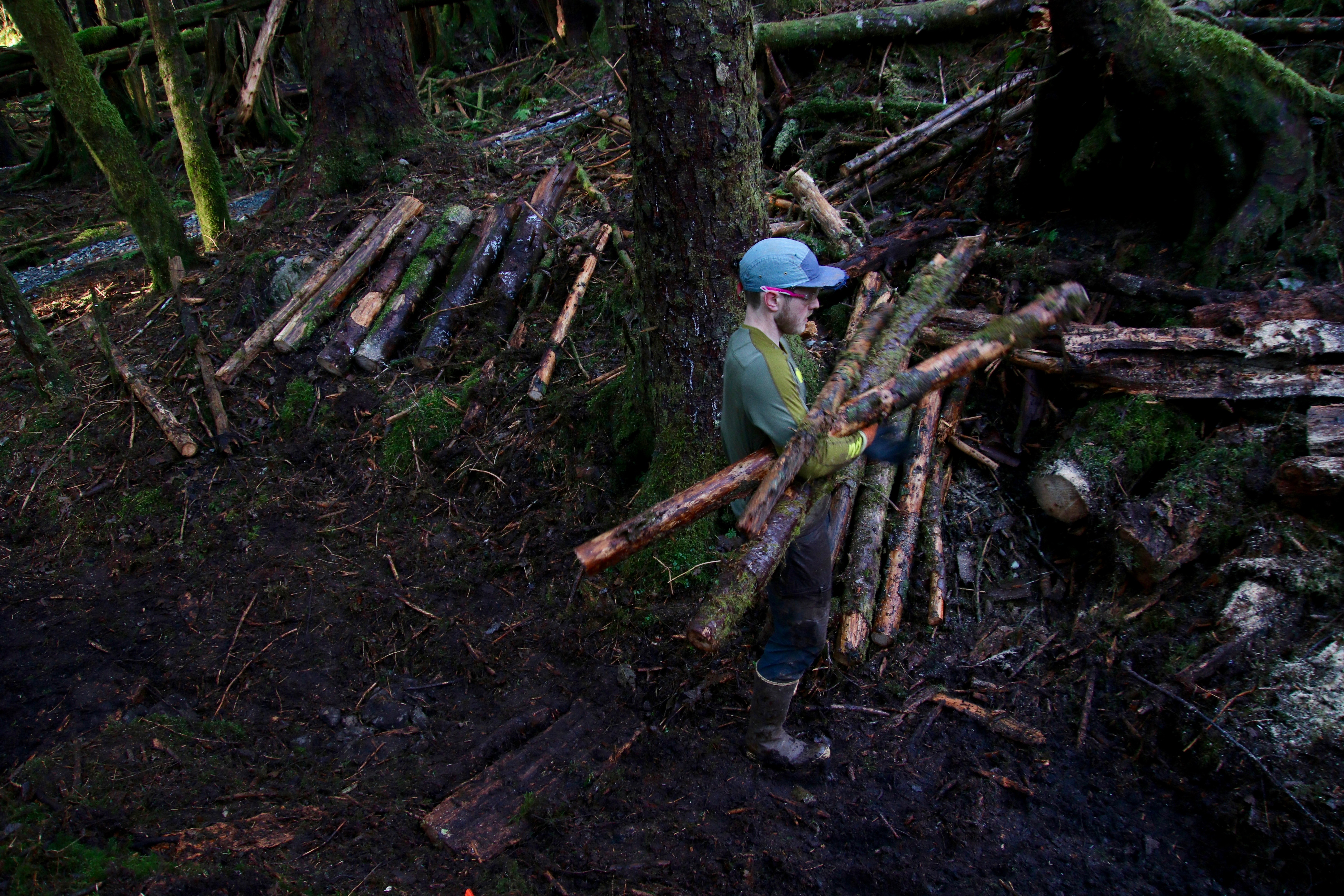 Inclement weather, treacherous terrain, and record amounts of rainfall posed their fair share of challenges, but the Corps accomplished these projects in the short timespan of less than four months. With over half a dozen substantial public works projects completed, the SCS CCC helped the City and Borough of Sitka with deferred public works maintenance efforts and created new community assets benefiting Sitkans, Alaskans, and visitors alike. Not only were Corps members, contractors, and partner organizations directly involved with these projects aided through work opportunities, but the thousands of future trail runners, mountain bikers, and hot spring enthusiasts who live and visit the Tongass will also reap benefits.