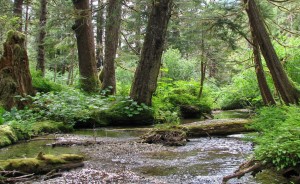 In 2011, the Sitka Conservation Society partnered with Trout Unlimited and the US Forest Service to start a multi-year salmon habitat restoration project on the Sitkoh River using funds provided by the Alaska Department of Fish and Game's Sustainable Salmon Fund. The construction contract was awarded in 2011, but in-stream work began in spring of 2012 and continued into the summer of 2013.

Past logging and road-building practices compromised watershed function and salmon habitat in the Sitkoh River Valley. An analysis conducted by The Nature Conservancy and the Forest Service identified the Sitkoh River as one of the seven highest priority watersheds for restoration on the Tongass National Forest. In public forums the community of Sitka has consistently stated that restoration in the Sitkoh area is a high priority, particularly for coho salmon and steelhead spawning and rearing habitat. The Trout Unlimited Alaska Program also identified the Sitkoh River as one of its 25 Restoration Priority areas. 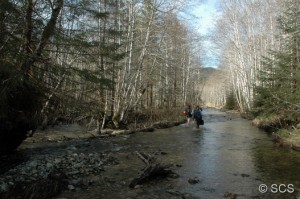 This Joint Watershed Restoration Project restored two ecologically significant sections of the Sitkoh River. SCS plans to replicate these efforts in other areas with high ecological and stakeholder value.

This phase restored 1,800 feet of critical salmon rearing habitat. In this section of the river, the flow was diverted down an adjacent logging road. This made the channel shallow and wide with almost no pool habitat. The diverted river flowed through previously harvested areas that are covered with alder and lack the large conifers necessary to provide large woody debris to the stream, reducing the likelihood of natural salmon habitat creation. Had this area been left untreated, the diverted segment of the Sitkoh River would have continued to widen and to erode the unstable roadbed. This would have continued to impede fish passage at high and low flow periods, increase the risk of juvenile salmon mortality in the winter, and further degrade habitat downstream.

Phase one focused on restoring the Sitkoh River to its original stream channel location. Portions of the stream channel were reconstructed to create self-maintaining pools and riffles, to restore hydrologic function, and to inhibit future diversions to the road. Over time, this will allow new trees along the banks to grow large enough to serve as meaningful woody debris sources. 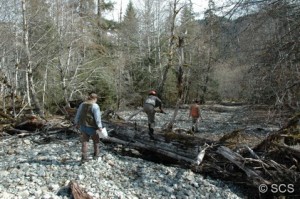 Phase two focused on a river section slightly downstream of Phase one. Previous loggers had harvested trees all the way down to the stream edge, removing future sources of large wood to the stream. To counter this, SCS and its partners added large wood structures to improve salmon spawning gravels, to create pool habitats, and to slow down the stream to reduce bank erosion. Phase two of this project was primarily funded by the US Forest Service.