Callie Goes to Hoonah: A Reflective Look at Phytoplankton

This was definitely a trip of firsts for me- as I find most of my adventures in Alaska. It was my first time volunteering on a research vessel studying cysts map of phytoplankton (which, granted, was a substantial first for me), first time seeing a brown bear and first time traveling to Hoonah via flight plane. In order to fly into Hoonah and begin my adventure of firsts I first had to take a 6 person bush plane (yikes). It was a unique experience, but I would be completely satisfied with never having to do that again. I can see the appeal, sure, but sitting right behind the pilot feeling the plane slightly pivot over open water was nothing short of terrifying. After our “seemingly smooth” landing it took me a full 30 seconds to regain composure and blood circulation in my hands, but hey, I can say I did it right? And so the adventure ensued. So this post is a description of the work I was fortunate enough to be a part of last week in Hoonah as well as an ode to primary producers and the fantastic people out there who study them. 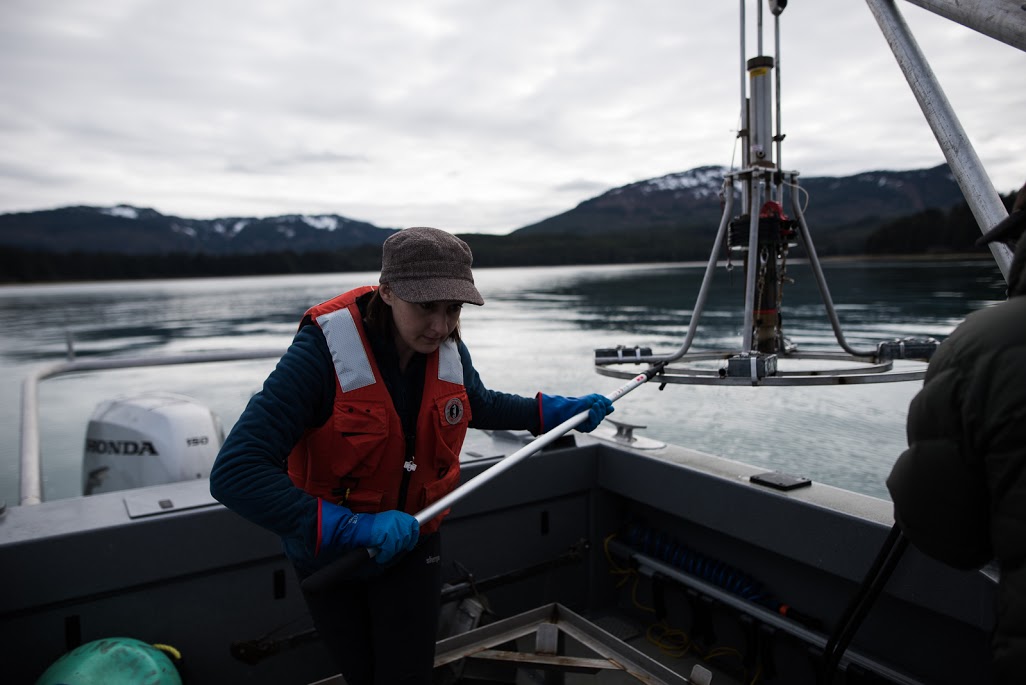 The basic concept of this project and some of the work Dr. Elizabeth Tobin is conducting out of UAF is mapping cysts of the dinoflagellate Alexandrium that, as many Alaskans know, produces a toxin that can accumulate in shellfish and cause paralytic shellfish poisoning (PSP). A cyst is just a fancy way of describing a part of the dinoflagellate life cycle where it is dormant (not mobile) and tends to accumulate in sediments- which is hypothetically ideal for sampling. So, in order to collect samples we dropped a “corer” into the waters around Hoonah (pictured below) that basically (all eloquent scientific descriptions aside) attempted to grab some mud and bring it back up to the boat. Liz can then use these samples to not only determine if cysts are present or absent, but determine an actual volume of cysts present- which is pretty cool. 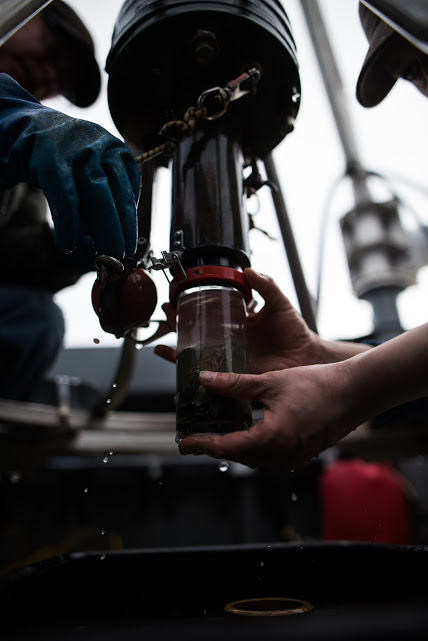 My work on the boat consisted of operating the winch-which was used to drop the “corer” into the water (it weighed upwards of 400 lbs). Considering my boat savviness is around a 2 (on a scale of one to boat savvy) I was pretty content and entertained operating the winch. In all honesty, I would have been happy doing just about anything.  It was so incredible being out on the water- feeling the splash of the salt spray, watching curious Harbor Porpoise’s dart around the equipment, and learning from two incredible scientists- I mean what more could a budding scientist ask for?

What is especially interesting about Liz’s work (and perhaps what shouldn't be so seemingly novel about it) is the fact that she combined traditional ecological knowledge with western science techniques. She conducted a series of interviews among tribal elders and citizens in Hoonah in order to collect information about where people actually harvest shellfish and where they avoid based on the perceived danger of paralytic shellfish poisoning. She then used this information to help determine sample sites for her project. Which is something I think we should always strive for- connecting the people, the very communities, who have a vested interest in the actual research.

I want to work on projects and be apart of movements that address concerns local communities are already aware of rather than coming in with my own notions of what needs to be done. And perhaps, most importantly, the key is sharing those findings back with the communities it’s going to impact in the first place. Let’s give people the opportunity to make informed decisions moving forward.

And that was what was so great about Liz’s work and intentions with her research moving forward. I was so happy and fortunate to be a small, minute part of work that has the potential to be really informative and impactful. Liz plans to share her findings with the community in Hoonah to help them make informed decisions about where to harvest or where to invest in aquaculture operations. In the brief time I was in Hoonah this work made me more curious about my place in the world, with science, and the power of small things (especially the ones dwelling in sediments).

At the end of my trip I met a State Trooper on the dock, whilst loading some of our gear, and we chatted about aggressive bull sea lions, my position, and his bear hunting spots (the dude looked like he would fair fine just wrestling bears) and I thought to myself wincing under the pressure of his enormous handshake- that this is what it must feel like to be wild and free in Alaska.