On the morning of June 17th at 5:30 AM I hopped into Scott’s truck. It was early but I wasn’t tired; neither were Luke A’Bear or Alana Chronister. We were all too excited anticipating our adventure into the Alaskan Wilderness. The journey began on Scott’s boat, traveling about three hours to get to our first site, Waterfall Cove. On the way I was already surprised by all the animals we had seen: bald eagles, sea otters, cormorants, and seagulls to name a few.

After the data has been collected, the loggers are returned to their spots to collect data for another year.  Alana and I then took mixing transects of the stream meaning we took the temperature of the water in ten spots across the stream. This gives the team an idea of the variability of the stream temperature. All of this data is important because a baseline needs to be established for the temperature of rivers and creeks that support salmon life. As climate change warms the planet, and thus the temperatures of creeks where salmon runs are present, salmon populations will suffer if the creeks become too warm. Because of this data, scientists in ten, twenty, or fifty years in the future will be able to study salmon populations in correlation with climate change and stream temperature changes. For example, if in the future salmon populations are dwindling and stream temperatures are much higher than in the past, scientists will have a variable to study further. 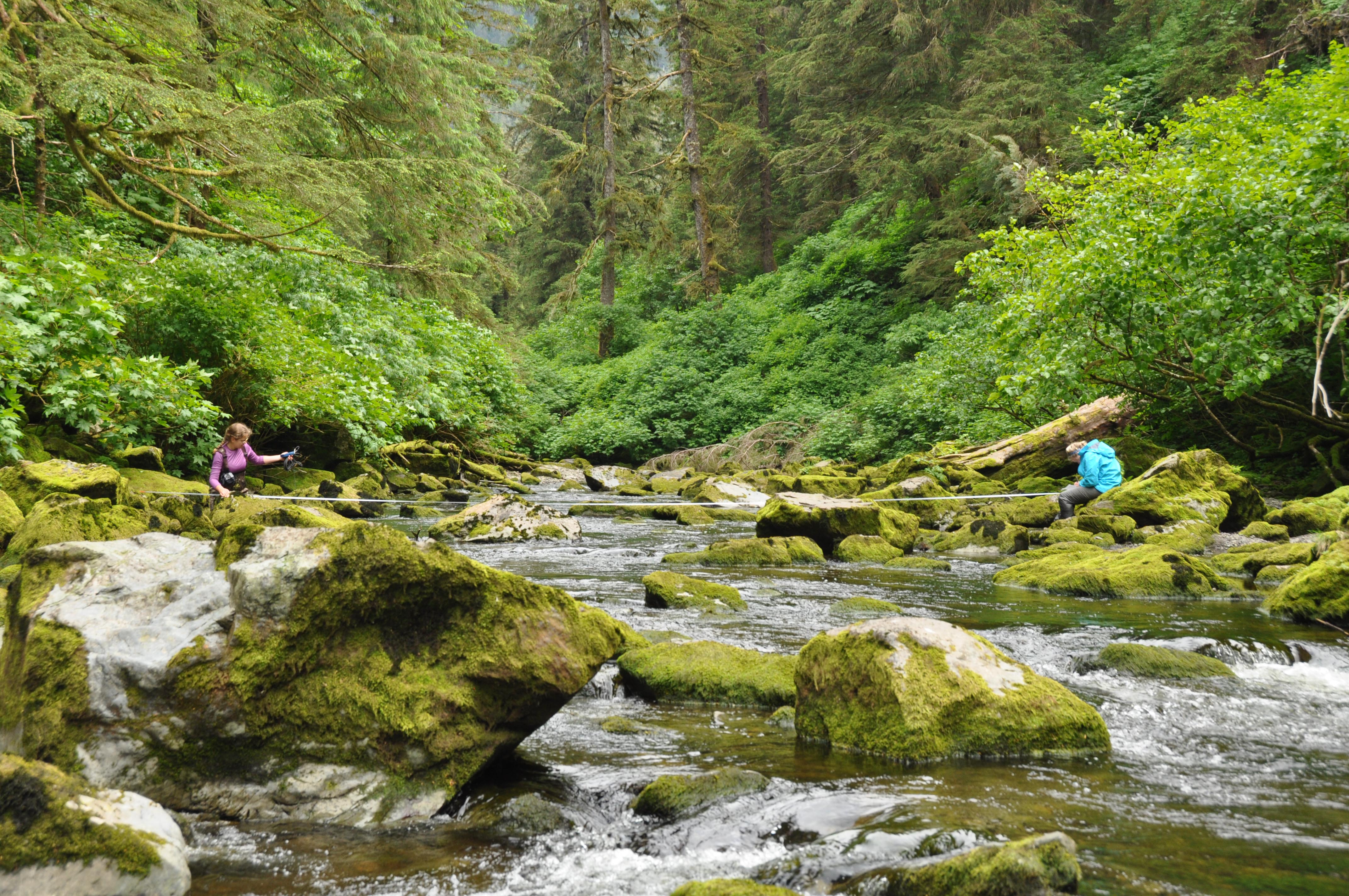 The next site was Ford Arm, another beautiful stream and forest in this wilderness wonderland. At this site the temperature loggers had to be moved upstream to avoid tidal influences. Last year the loggers could not be moved farther upstream because it was late in the season and the bears were gorging on the plentiful salmon swimming through the creek.

The next day’s site was Black Bay, a site that must be kayaked to due to the steep bank. Scott and I paddled to the site to gather data while Luke and Alana explored the estuary and its resident bears. On Friday we visited a site called Goulding River and hiked to a close by waterfall afterward. Saturday was our last day and was spent first watching a pregnant doe swim across the channel then hobble to shore and visiting a place called the Potato Patch before going to the site. Despite its unglamorous name, the Potato Patch is one of the most stunning places I have been to. 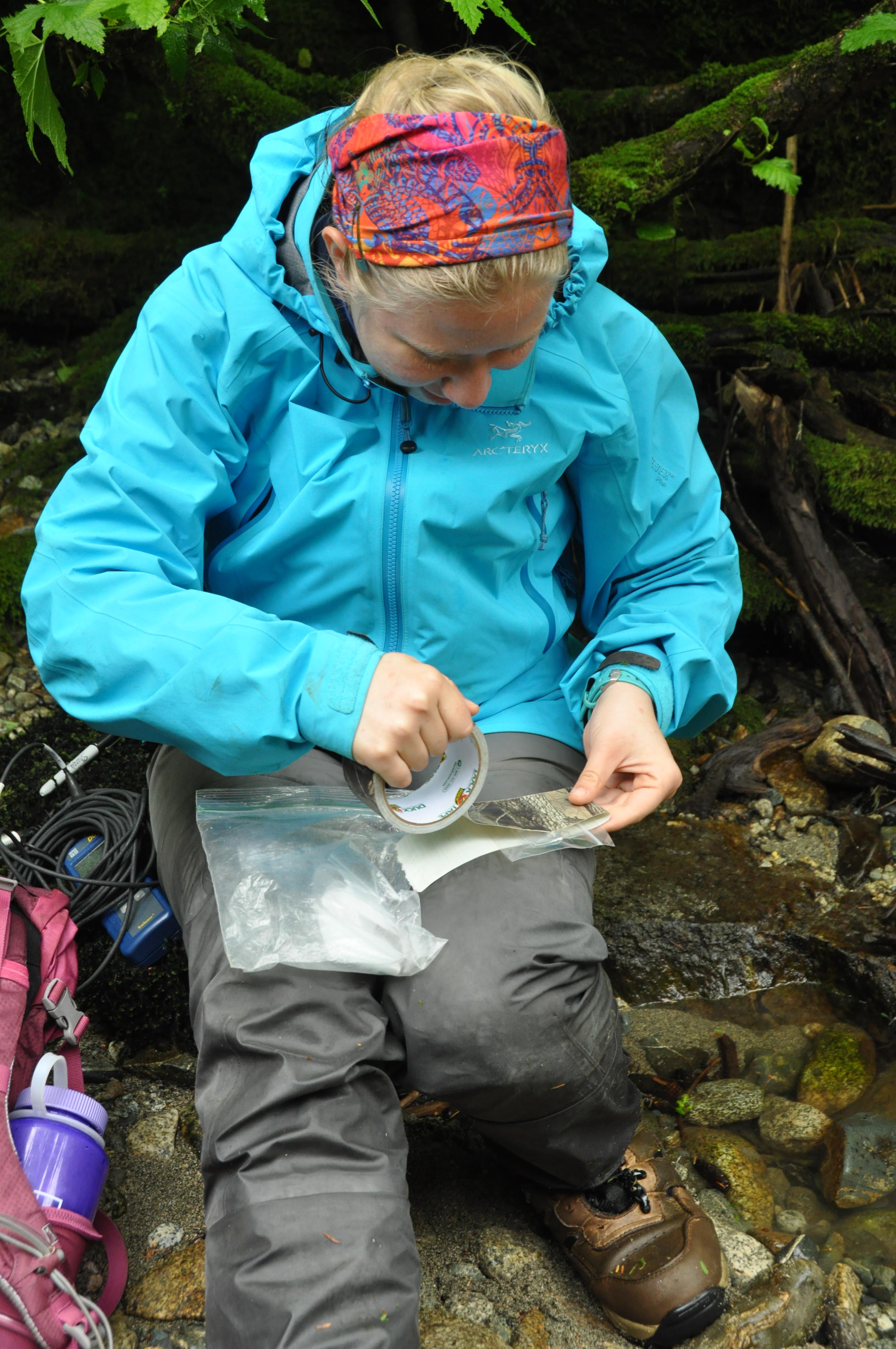 The bright sun warmed us all up as we eagerly shed warm layers and put on our sunglasses. We climbed off the boat onto a white sand beach surrounded by the nearby mountains. The beach led to a driftwood logjam and behind that a bluff covered in grasses and wildflowers. Is was so tempting to just forget about everything else and stay there forever. However, we had to go to visit one more site called Leo’s before heading back to Sitka. At this site, the stream ran just a short distance before ending in a large lake. We gathered data as usual but having just been to the beautiful Potato Patch and this being our last site, I was thinking about the importance of the work SCS is doing. Salmon is vital not only for many plants and animals living in Alaska but also for the people. Just in the town of Sitka alone, the salmon industry employs a significant amount of people. This means salmon population and health must be preserved to keep not only nature in balance, but in order to create a sustainable and lasting fishing industry that will allow the people of Sitka and Alaska to continue benefitting from the land for many years to come.

Special thanks to Knox College and Sitka Conservation Society for giving the amazing opportunity to be the Wild Salmon Conservation and Restoration Intern, I can’t wait to see what the rest of the summer holds! 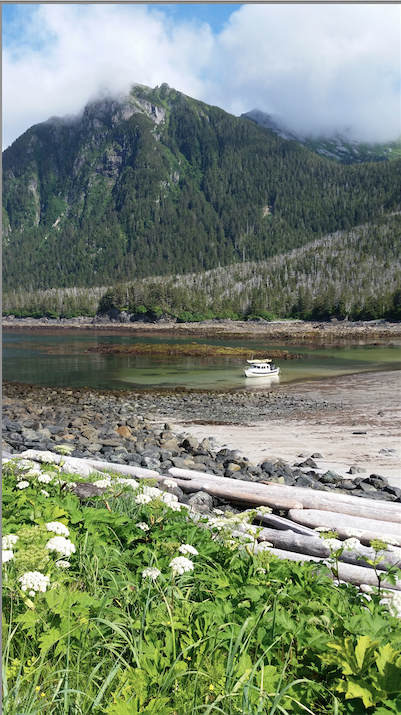