Revisiting the Genius of the Haida Canoe: Part 4 of a 4 Part Series

Southeast Alaska’s waterways are its highways. Boats and barges are its trains and semi-trucks. For thousands of years, people in this area have lived off the abundant plants, animals and salmon stocks which the coastal temperate rainforest rainforest, today part of the Tongass National Forest, provides. Before the Russians occupied this chain of islands off the coast of British Columbia, Tlingit and Haida native peoples traversed its waters in the belly of canoes carved from Sitka spruce and red cedar trees. They paddled canoes to fishing camps in the summer and hunted for seal and sea otter. The Haida, in particular, were revered for their canoe craftsmanship, trading the vessels to tribes throughout modern day Alaska and Canada. When Alaska natives stopped relying on the canoes for daily use at the turn of the century, many of the original carvers passed away and took with them their time-tested technique of building and maintaining the dug-outs. Today, There are only a few of the original old-style dug-out canoes. Many are maintained by the tribes, while others are on display in museums. Yet even without those original teachers, a new generation of Haida and Tlingit canoe-carvers is emerging in Southeast Alaska, pulling together the clues of a lost art left by their ancestors. 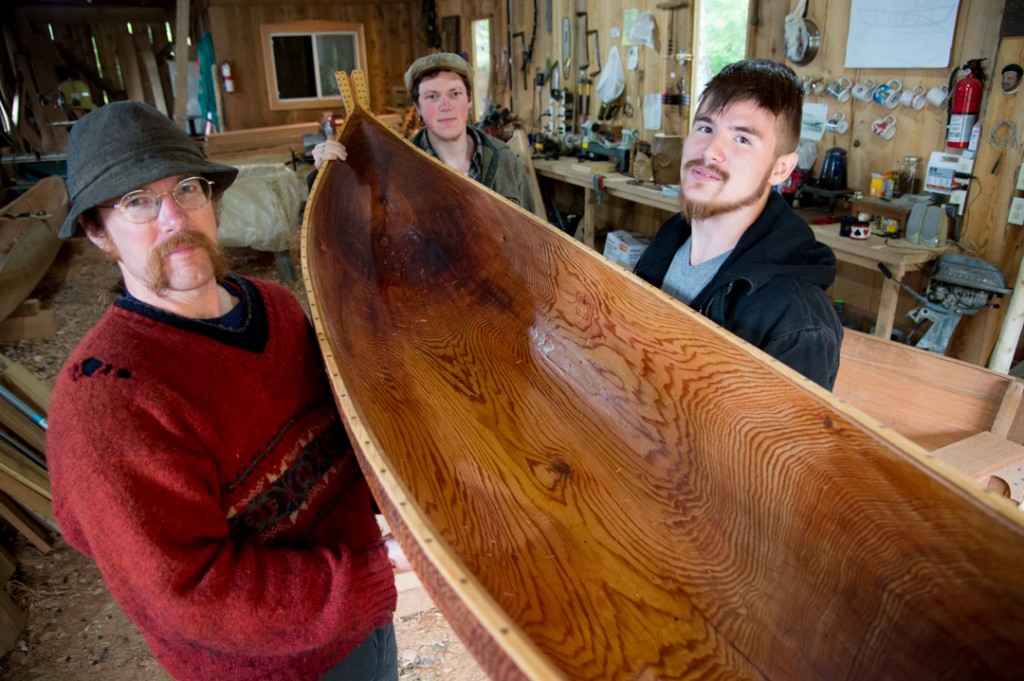 One of those carvers is Stormy Hamar. Though he apprenticed with a totem carver as a young man, his knowledge of canoe carving comes mostly from his own research. He compiled photographs of old dug-outs, and spent hours in libraries and museums like the Museum of Civilization in Ottawa studying the crafts. I visited him on a typically windy, rainy day in his home town of Kasaan (pop. 53) on Prince of Wales Island. After braving fifty miles of logging roads through the national forest that surrounds the village, we were warmly met by a carload of Stormy’s family and his two apprentices, Eric and Harley. We followed to a beautiful new carving shed sitting on the edge of the bay.  During the day, it’s open as a demonstration shed to the cruise ship passengers who stop for day trips in the town. The building was actually funded and is now owned by the Organized Village of Kasaan as part of a larger initiative amongst Southeast Alaskan tribes to provide alternatives to positions in construction and logging, and diversify the local economy.

Entering the shed, we were hit with the sweet familiar smell of red cedar. Paddles hung in the corner and woodchips covered the floor. Stormy brought us towards the back of the room to a ten foot canoe. One of the apprentices, Eric, who is Stormy’s son, had engraved the rim with a pattern influenced by both Haida formline art and cartoon animation. Stormy explained that the character in the engraving represented the movement through time; at the stern, the past, in the middle, the present and in the front, the future. 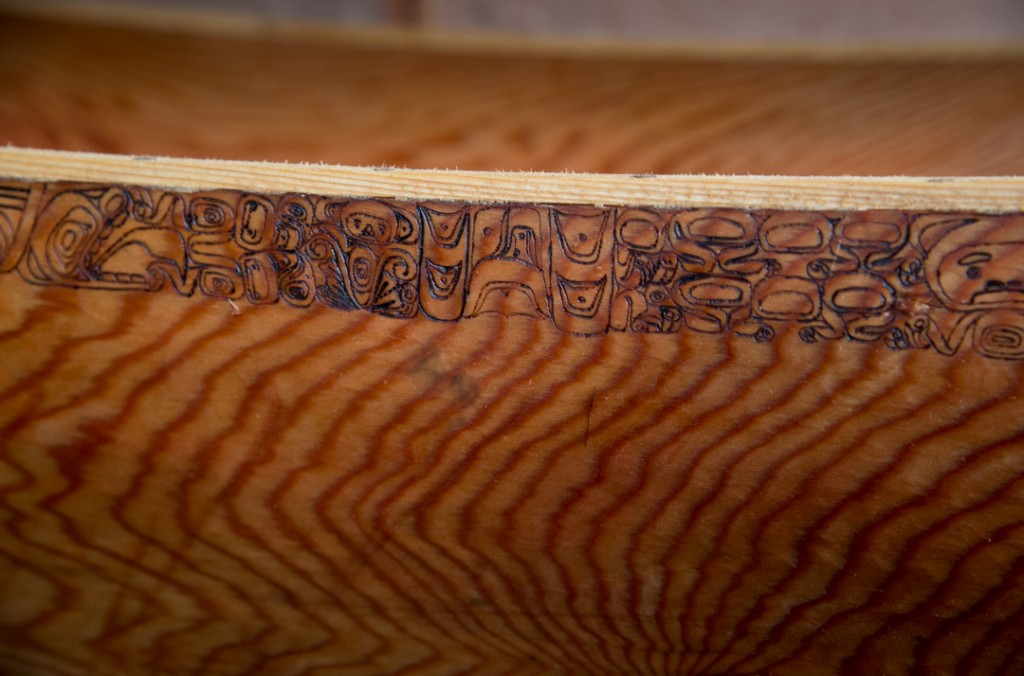 For Stormy, questions about the relevance of traditional carving methods to boat-building today are inescapable. His work tip-toes a border between the traditional and the modern, and his challenge is to balance the two. “We want to be who we are,” says Stormy, in other words, living in the modern world, while also revisiting and learning from the Haida canoe-carvers of the past. For instance, is using an electric chainsaw (instead of an adz or axe) to carve out the center a dug-out traditional? To this question, Stormy asks, what is traditional? “It’s been a long standing tradition of our people to use the latest and greatest available tools. And in that way, it is traditional. When somebody would come up with the latest and greatest, (the Haida) obviously would have used it because it would have improved their lives.” In other ways, however, integrating modern technologies contributed to the collective forgetting of time-tested methods and common knowledge (like, for instance, that adzing the wood compressed it, making it water resistant). With his apprentices in tow, Stormy aims not just to build the canoe, but to try and understand why  they were built in a specific way for centuries. “There was a good reason to build the canoes that way,” Stormy said, “And I would assume that some of these things have to do with speed, efficiency, pay-load, what the canoe can carry, the ease of manufacture…” Some of these features of the Haida canoe were held in common by canoes carved throughout the north, up to Yakutat Bay and into parts of British Columbia; clues that the design must have been worth replicating. 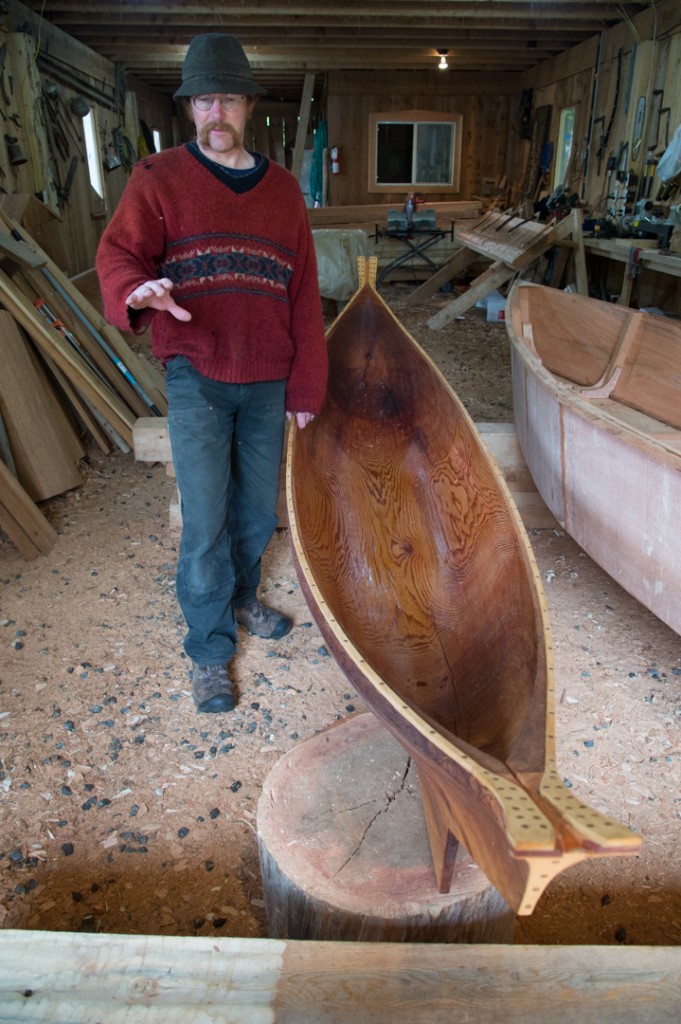 Stormy’s carving projects are educational, both for himself, for his two apprentices, and youth from Kasaan who are curious about carving. His initiative is as much about relearning the carving tradition as it is about creating a community space and a source of identity for the town. “If we establish a canoe-building program here then our kids will have that bond to canoe-building,” Stormy says,“Then they can kind of identify themselves in their own mind or to others as canoe-builders and canoe-users from Kasaan.” The carving shed is part of a larger initiative by the Alaska native community to reclaim the native lifestyle and knowledge-base, much of which was threatened by U.S. policy in the 19th and 20th centuries, which prohibited people from practicing their language and culture. The dug-out project addresses the concern that native knowledge and identity be passed on to the next generation, while also providing economic opportunities for the town.

Harley Bell-Holter and Eric Hamar, Stormy’s apprentices, both envision turning carving and woodwork into careers. Eric will soon be heading off to wooden boat building school in Washington, though he plans to end up back in Kasaan. “I want to continue the woodworking tradition around here and give the youth a connection to the water.” With few employment options outside of the tribe and, of course, logging, Eric says that he would love to return to Kasaan and create a small business building wooden boats. Harley is from the village of Hydaburg, just a few hours away on prince of Wales Island. “I was raised with culture. Culture has always been my life,” he told me. He is set on returning to his hometown to become a community leader and master carver. 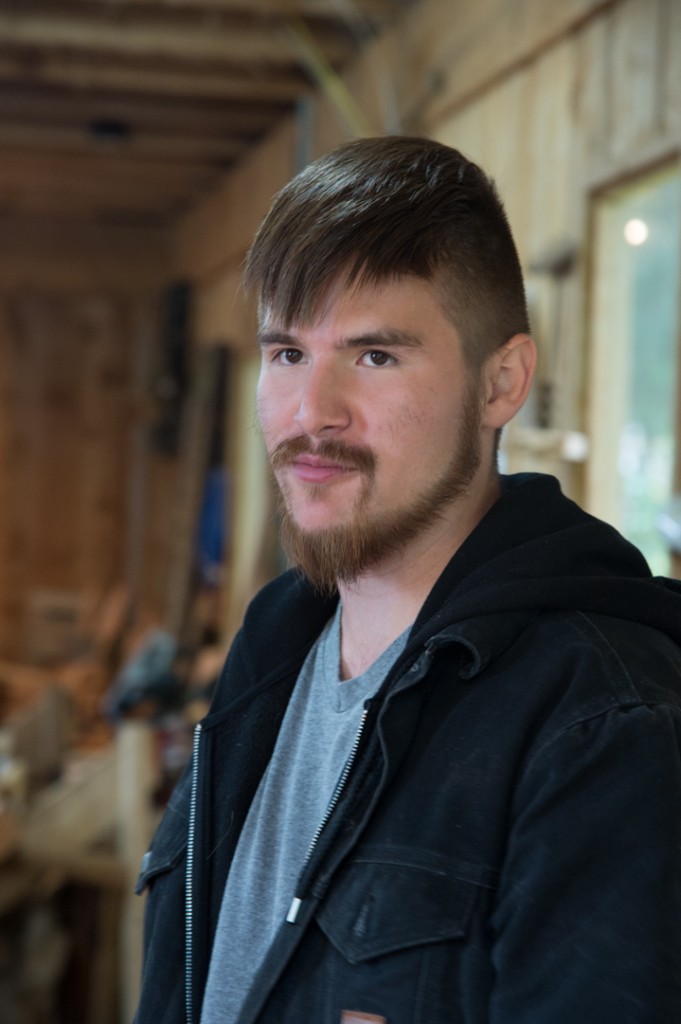 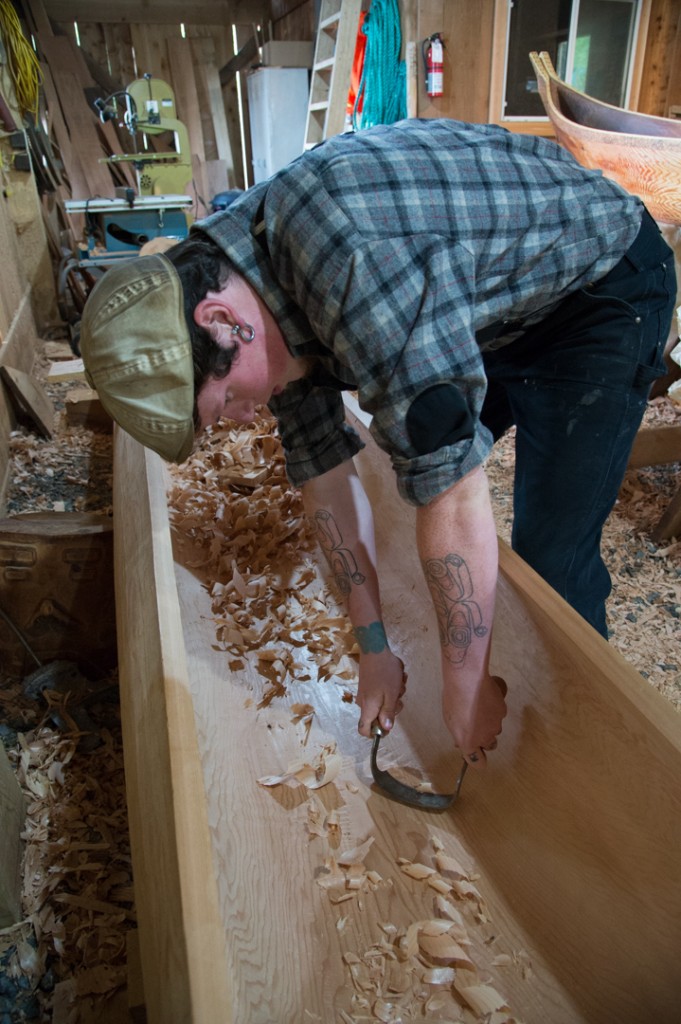 When the grant for the carving shed and apprenticeship run out in two years,nobody knows what will happen to the dug-out project in Kasaan.  Another challenge is finding old-growth trees large enough for a canoe, meaning more than three and a half feet in diameter. “We haven’t had much success finding good trees,” Stormy told me, “There’s been so much logging on this island that the good trees were taken out a long time ago.” But this hasn’t stopped Stormy, nor other carvers from pursuing this craft in Southeast Alaska. Eric told me that he is motivated and inspired when he hears about other canoe-building teams. “We have a unified goal,” he said. Despite the obvious economic obstacles for a craft some would consider obsolete, canoe-building throughout Southeast and the pacific northwest, along with a canoe journey movement, is on the rise. Like in Kasaan, it is the the inspiration of a carver like Stormy, not a grant, which makes these dug-out project in Kasaan a reality. It is a spirit which declares that honoring the genius of the Haida canoe-carvers of the past is a worthwhile investment.

Sarah Local People and Place Threats to the Tongass Tongass