Removing Trash to Protect Our Treasure 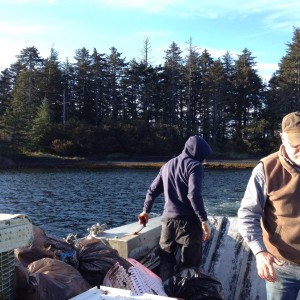 The first 2014 summer Wilderness was a trip to the West Chichagof-Yakobi Wilderness area, where we based camped at Baird Island. Here, we conducted visitor use monitoring, surveyed for invasive plants and completed campsite inventories. Additionally, we picked up a lot of beach trash and cached it on the island. During this trip, we also revisited sites where there were roofing materials and other trash cached from past field seasons. On October 8, SCS employees Mike Belitz and Sophie Nethercut and volunteer Paul Killian took a boat captained by Charlie Clark back to these locations to remove and dispose of the trash.

The Wilderness Act, which celebrated its 50th birthday last month, states that Wilderness Areas must be areas “protected and managed so as to preserve its natural conditions and which generally appears to have been affected primarily by the forces of nature, with the imprint of man’s work substantially unnoticeable.” Thus, as Wilderness stewards, we are inherently committed to collecting and removing trash, which compromises the naturalness of an area. While marine debris has been washing up on Alaska’s shores for decades, there has been an increase in marine debris since the earthquake and tsunami that struck Japan in 2011. This disaster makes the tireless endeavor of picking up trash appear even more insurmountable.

Although the tsunami debris has not been found to have radiation, it still causes serious risks to other animals. Marine debris is often made up of products that do not naturally decompose and would remain in the environment for years. Some of the most common marine debris is plastic and Styrofoam, which are often mistaken for food by fish, bears and seabirds. These animals are unable to digest these products which can be fatal to these animals because an accumulation of plastic and Styrofoam in their body may cause the animal to feel full, leading to death from starvation. 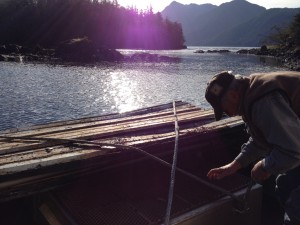 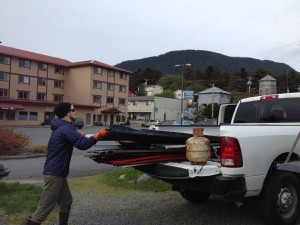 An additional concern is that Japanese tsunami debris was covered by Japanese plant or animal organisms and may reach coastlines outside their native habitats, becoming destructive to local fish, wildlife and plant species. Marine invasive species can seriously affect Alaskan marine ecology by outcompeting native species for food and habitat and their presence must be monitored. 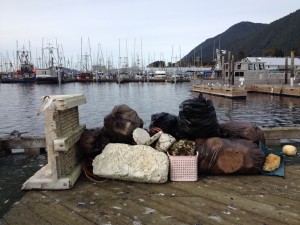 Trips to the wilderness are often fantasized as remote excursions where one is surrounded by snow covered peaks, apex predators and clean running water. This trip to the West Chichagof-Yakobi Wilderness did have its own grandeur scenery, as we were among vast old growth forest, spotted a regal black-tailed deer and in the distance stood the stunning Fairweather Range. But look a little closer and the algae ridden plastic bottles and half-chewed Styrofoam blocks painfully come into view. This trip was about recognizing the trash among the treasure and removing the items that should not be in Wilderness, a place federally protected as a safe haven from human impact.