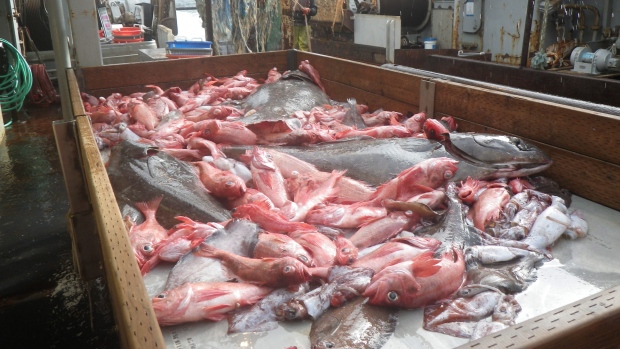 Halibut caught by factory trawlers await separation from the targeted product. Though thousands of tons of halibut are caught by trawlers each year, the directed fishery is facing closure. ©Paul Logan/HO/The Canadian Press

On June 9th (10th?), Alaskan halibut fishermen, who have seen their individual quotas cut by up to 70% over the last ten years gathered to watch the North Pacific Fisheries Management Council (NPFMC or North Pacific Council) vote on reduced halibut bycatch caps for trawl fleets fishing in the Bering Sea. Fact sheets from ALFA, stories from KCAW, NPFMC’s Environmental Assessment, and our previous blog post all describe the conservation fight over halibut, but here are a few crucial bullet points as a reminder:

Faced with these facts as well as public testimony overwhelmingly supportive of much stricter bycatch caps for Bering Sea trawlers, the North Pacific Council chose to do...not enough.

Here’s what the Council did do:

The NPFMC reduced overall bycatch caps in the Bering Sea by 21%. Specific fisheries took on greater or lesser shares of that reduction. The Amendment 80 fleet, the Seattle-based bottom trawlers long portrayed as the greatest villains in this fight, will shoulder a 25% reduction in their bycatch caps. This will require them to reduce their halibut bycatch by more than 17% from last year, hopefully taking some much needed pressure off the stocks. The Trawl Limited Access sector will only suffer a 15% cut in their bycatch cap, while the Community Development Quotas and the non-trawl pacific cod fishery will both take a 20% reduction in bycatch.

Here’s what the Council didn’t do:

Actually reduce bycatch! While the halibut bycatch cap was reduced by 21%, that new cap is still ABOVE the amount of halibut caught as bycatch in 2014 (which, recall, was 7x the number of fish caught by the directed fishery). The Amendment 80 fleet will be required to reduce their bycatch from 2014’s level, but they will be the only ones to do so.

While it would be easy to dismiss the NPFMC’s ruling as a disappointing but ultimately irrelevant policy mistake affecting communities far away from Sitka Sound, the migratory nature of halibut means that those juveniles scooped up by factory trawlers could very well have ended up on your dinner plate instead. Commercial fishermen in Sitka have already been affected by declining halibut populations, as lower directed fishery allocations reduce the number of halibut Individual Fishing Quota holders can take. It would be unreasonably optimistic to expect that sport and subsistence halibut fishing in the Gulf and Sitka Sound will remain unaffected for much longer.

What are our future opportunities to fix this?

Long-term, halibut’s best hope is consumer education. Bottom trawling is akin to clear-cutting, destroying valuable habitat for decades or centuries. Southeast Alaska banned trawlers in 1998. When Silver Bay Seafoods bought trawl-caught fish in 2012, eight Sitka leaders wrote a public letter to the company asking that they respect the ban on trawling in the future by avoiding trawl products. Silver Bay Seafoods indicated that they would. A local victory, but one that could potentially be replicated across the state. Trawling has been described as “clear-cutting” the ocean floor; the same types of consumers who would think twice about buying wood products from clear-cut old-growth forests or rainforests should also think twice about buying cheap, unsustainably harvested groundfish.

From a policy perspective, the NPFMC is where most of our conservation pressure needs to be focused. As Sitka resident Charlie Wilbur wrote in the Sentinel, “The Council has the ability and moral responsibility to correct this festering problem before halibut become 100 percent utilized as trawl bycatch.” The next North Pacific Council meeting is in October. While an agenda has not been posted yet, the Council indicated at this meeting that halibut bycatch will be on their radar for some time to come. We will be ready.

If you are interested in writing a letter to the NPFMC or learning more about this issue, please contact Esther at [email protected]. 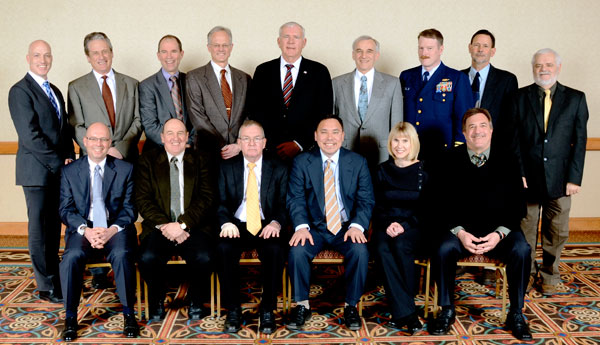 The North Pacific Council. Hardly the most diverse group, but a uniquely powerful one. Visit the NPFMC page for Council member bios.