Canoe Journeys in Southeast Alaska: Part 2 of a 4 Part Series

Doug Chilton and The One People Canoe Society

A decade ago, when his canoe team was invited to race at the Quinault Indian Reservation in Washington state, Doug Chilton was thrilled. The team had trained for weeks and raised enough money to cover travel expenses from their home in Juneau. But when they drove into Quinault, ready to cream the competition, they were surprised to find that they were a day early. When they woke the next morning, they were not greeted by vans full of trophy-hungry canoe teams, like they had expected. Instead, that morning they arose to find the bay filled with canoes which had been paddled from reservations across Washington and Canada. Some had come hundreds of miles.

“What we didn’t know at the time is that it wasn’t about racing for them,” Chilton explained to me, “it was about the journey.”

Over the course of the week in Quinault, Chilton was moved by the way the canoe journeys were building community and reconnecting the native community in Quinault with the paddling culture that their ancestors had flourished with for thousands of years. Chilton was overwhelmed and inspired. He came back to Southeast Alaska with a refreshed goal: he wanted to build a canoe-community in his home waters and reconnect the native community in Southeast with the paddling traditions of their Tlingit and Haida forefathers and mothers.  More importantly, he hoped to build a movement that would bring together native tribe-members of Southeast Alaska in ways he had witnessed in Washington.

Flash forward. Doug managed to empower a team of people to paddle from Hoonah to Juneau for Celebration, a biennial festival celebrating Haida, Tlingit and Tshimian traditions and culture. While it was hard to garner support prior to the the trip, Chilton told me that the team received an outpouring of enthusiasm once they reached Juneau. People were intrigued. Many doubted that the journey would ever come together. Once they witnessed Doug and his team successfully overcome the obstacles, they began to believe others could do it too. “Over the years, it’s been growing a little bit more and a little bit more, and sometimes it didn’t feel like it was growing at all. But we were staying busy,” Doug told me.

Since the first paddle to celebration, canoe journeys throughout the state have been taking off. Eleven canoes asked permission to land in Juneau at Sandy Beach for Celebration this year: the most canoes since Doug started paddling a decade ago. Doug and his team started reaching out to others to get them excited about the canoes. In 2005, they started the process of creating a nonprofit, calling themselves the One People Canoe Society.  As the One People Canoe Society, the group started giving paddling workshops throughout Southeast. During the workshops, participants carved paddles from yellow cedar carving blinds and also learned the basics of paddling as a canoe team. “During the workshops, we’re putting together the group that’s going to paddle the canoe,” Doug explained to me, “and the idea is to get them started paddling together as a unit… Now during the paddle workshop we are trying to build the excitement and keep the excitement level high.” And it’s working. 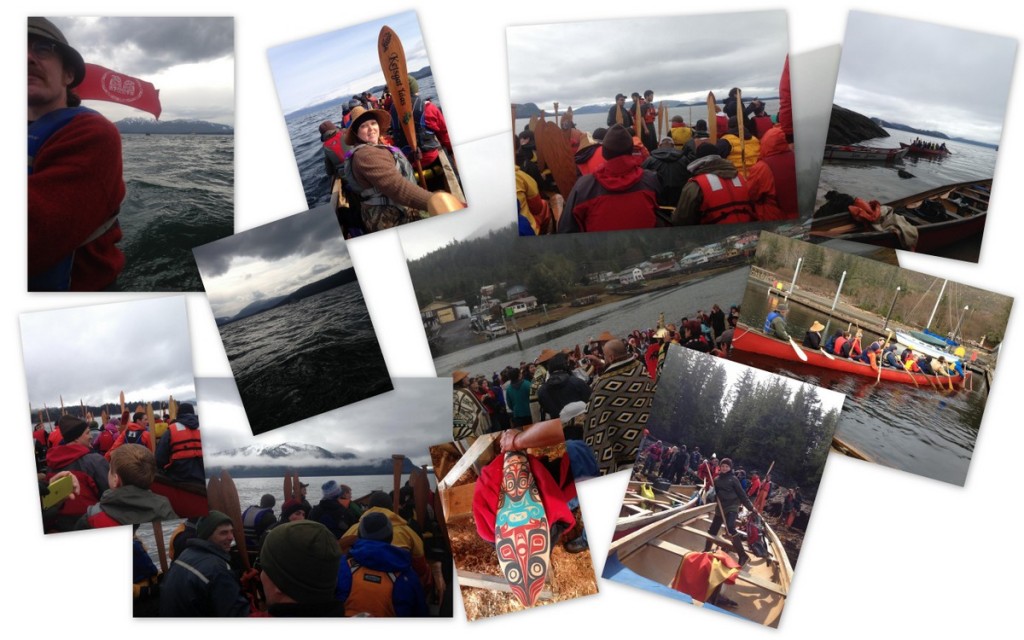 Doug Chilton and the One People Canoe Society was the spark that ignited a wildfire of enthusiasm for the canoe movement in Southeast Alaska. Now, there a number of new leaders, like Stormy Hamar and his Kasaan canoe team, running with the banner. After connecting with Doug, Stormy decided to organize a canoe journey to the re- dedication of Chief Shakes House in Wrangell in 2013. His first challenge, however, was to find a way to fill the 38 foot fiberglass canoe with people from the community, the first of whom were members of his family. The Hamars told me that it was initially difficult to get other folks in town to take the plunge and sign up for the journey. Many were concerned about safety and organization. The Hamars and their friends handed out fliers, stopped people on the street, and used a variety of other tactics to recruit volunteers. Finally, they were able to reel in fifteen people of all different ages and backgrounds, some with Haida heritage and some without. After carving their own paddles from yellow cedar, practicing paddling as a team for a a few hours, and pulling together last minute details, the day finally came to cast off. Many on the team were unsure if they would ever make it to Wrangell “We didn’t know what was going to happen,” Stormy’s daughter Stephanie told me, “We half expected to go down in the bay.”

Much to their surprise, the team was able to paddle 34 miles the first day and were able to camp for a few nights on an island. Tim Paul Willis Junior was a pace-setter up at the front with his girlfriend Stephanie. He explained to me that his team mates far exceeded his expectations, not just with their paddling speed but with their enthusiasm. “I was surprised that a couple people ever made the journey, “ he told me, “It was kind of impressive to see the different personalities of people come out through their actions.” Stormy, who skippered the boat, agreed that people on the team were able to show a different side to themselves. By the end, he told me, the group had become a significantly more cohesive community though in many ways, paddling in a canoe forced them to become more unified. 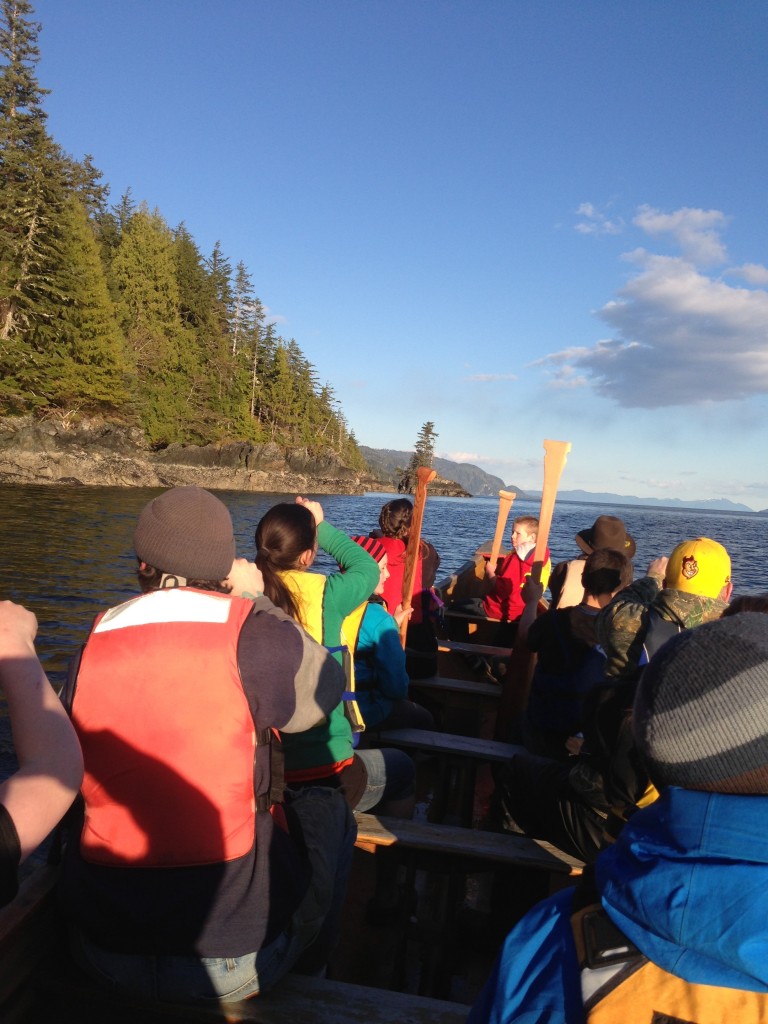 This sense of re-connection extends far beyond the rim of the canoe. In his spare time, Ken Hoyt is a part of a team that is building a strip-bark canoe in Wrangell. He told me that everyone, not just the paddlers, involved in organizing the canoe journey has a stake in it and wants to see the team succeed. “The journeys aren’t simply just paddling,” he told me, “There’s a huge amount of logistics involved, a lot of people involved. You know every canoe might take fifty or a hundred people to get everything together, to get every last logistic taken care of, every bag packed and every little check list checked off.”  Equally, the inspiration and sense of achievement, Ken told me, extends across the community; from the team on the water to the crowds of people singing traditional songs, dancing and cheering as the canoes come on shore to their final destination.

Listen to what Ken Hoyt says about how the different communities support the canoes here.

“People support the canoers in a big way,” he said, “They pray for the canoers, when we roll up to any community or leave any community they roll out the red carpet, or they’ll host a potluck and the dance groups show up. It’s powerful for the villages and the towns and the cities. Everyone celebrates the canoes in their own way. Like when we go to Juneau, they do that by having thousands of people on the beach. And when we go to Angoon, they do that by having a traditional foods potluck or a dance group. Kake woke up early in the morning to see us off. A lot of people were out on the dock with us. Just trying to help us out, whether it was picking up the canoes and helping us get them in the water, or if people forgot stuff at the house or they brought little last minute gifts for the trip.” 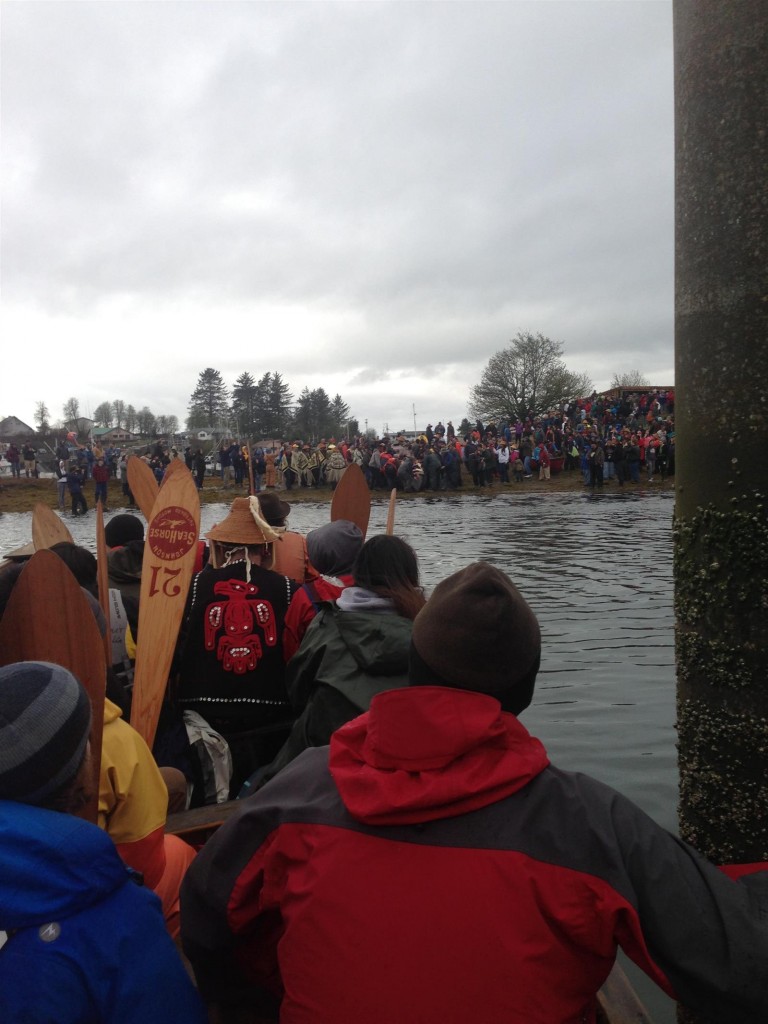