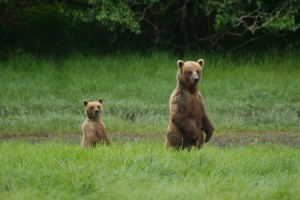 Baranof Island has one of the highest concentrations of brown bears in the world. The Sitka Conservation Society is interested in seeing that our bears and our people coexist safely.  SCS re-launches its Bear Aware campaign each spring shortly before the first bears of the year show up in neighborhoods around town. Using public service announcements and leaflet drops in neighborhoods frequented by bears, the campaign strives to remind the public how to avoid unwanted encounters.  The campaign primarily advocates that Sitkans not put trash out until the day it will be picked up, not fill bird feeders, and avoid leaving fish waste outside. The goal of the campaign is to keep both people and bears safe and healthy.

Take a look at one of our posters below: 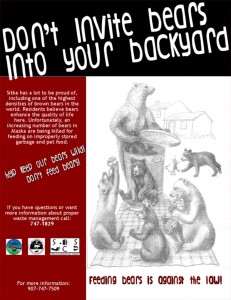