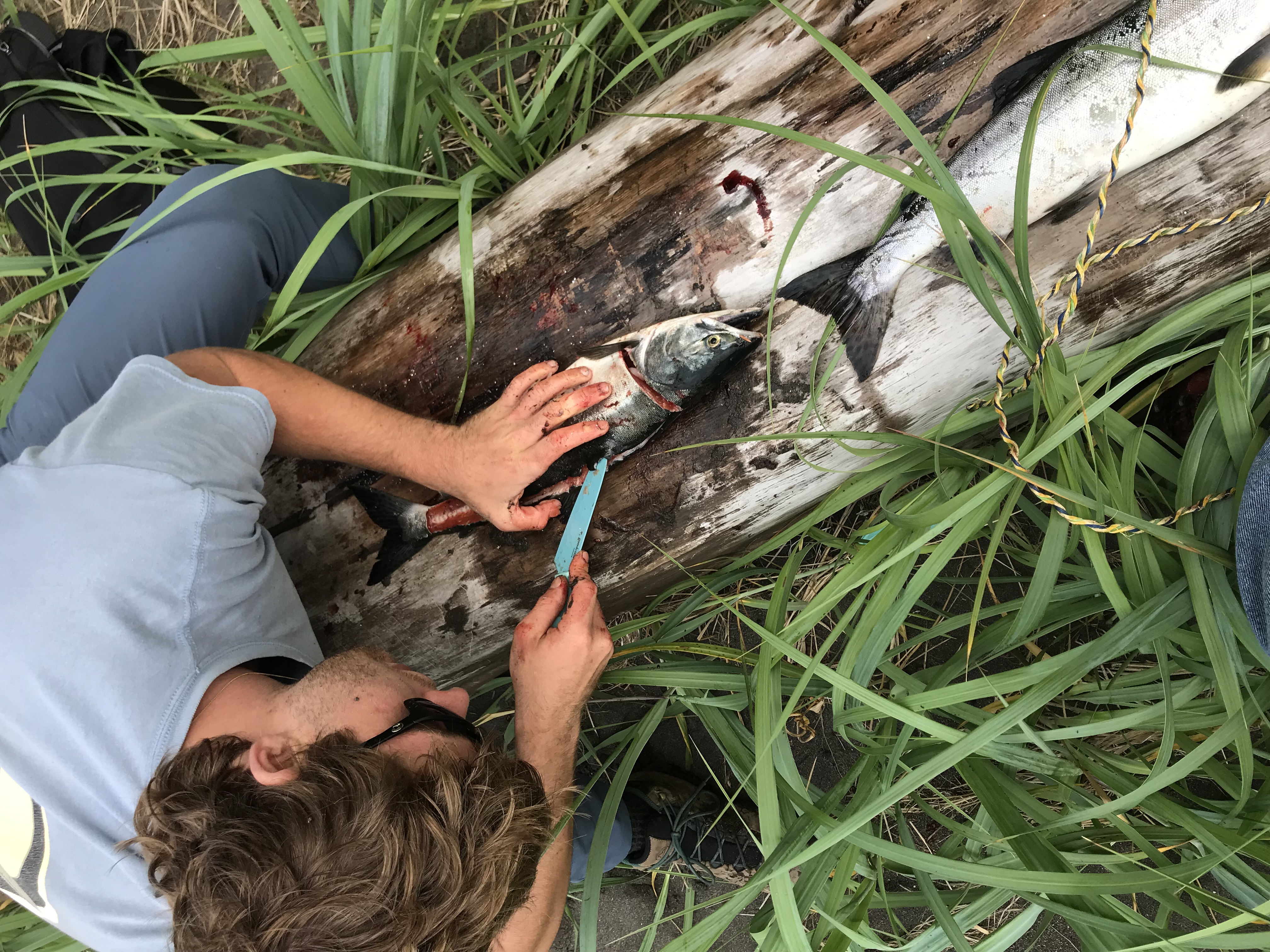 3:45 AM wake up call - we’ve got to catch the right tide. It’s time to go salmon fishing, if we are there too late the salmon will have already run up the falls. I was fortunate enough to be invited by one of my housemates, Michael, to go salmon fishing. Brendan, the owner of my housing, also came along.

As the alarm went off, I was initially not excited to hit the water, but I knew that I had made a commitment and needed to follow through, soon I would realize that the right decision had been made.

By 4:00 AM I made it down to the kitchen where Brenden had already eaten breakfast and was shockingly working on his computer. Frantically I began searching for food on the counters, not knowing what to eat, worried that I would be hungry for the rest of the day. The only thing that could be found was whole grain bread and cream cheese.

Then as we made our way to the boat docks, from his private stash Micheal produced a bowl of granola and ushered me into the truck. Each minute counted and it was most important to get onto the water.

We finally got onto the boat, I was wearing heavy fleece pants, Brenden and Michael were overwhelmingly prepared, not a single hiccup. We made our way towards Redoubt Bay. As we grew closer, the trees turned from a green blanket covering the mountains into individual characters. The slight fog and gentle breeze carried the smell of the forest. I could not have imagined sleeping another minute.

Redoubt Bay is the primary bottleneck for sockeye salmon returning to their birth place. At Redoubt there were dip netters and snaggers. Not being a resident I was not allowed to participate in the snagging or dip netting. While Brenden was dip netting, I spotted Andrew, my boss. Andrew was holding himself in the strong current below the falls. He skilfully maneuvered his dip net through the current, plucking one sockeye after another.

By the end of our fishing session Brendan and Micheal landed 7 sockeye each, success.

After fishing for sockeye we made our way to the king salmon fishing spot, it’s my turn to catch something now. We headed to Biorka approximately an hour away from Redoubt Bay. On our way we spotted sea otters, and sea lions. While riding through the waves and weaving through the islands, my eyes would barely stay open. As the boat thumped against the waves I was drifting in and out of sleep murmuring in Italian, as Brendan speaks many languages he was probably intrigued.

Soon the trolling lines were set and the GPS coordinates aligned, we were ready to catch a king salmon. A handful of rockfish beat the salmon to the bait. With an excited buzz the clicker of my reel indicated a king found my hook and was stripping line. Now it is my turn to experience the salmon of the Tongass. My face lit up like a toddler being handed a whole bowl of Jelly Beans as I played the fish to the boat. Into the nest, harvest complete. Back to Sitka.

On our way back to the island, Michael let me drive his boat. Soon we spotted a humpback whale. Micheal and Brenden remained focused on Sitka, I on the other hand saw another bowl of Jelly Beans and immediately turned the boat to go view the whale. The sight of whales is common for Michael and Brenden who reminded me to stay a respectful distance as I leaned against the throttle to get there quickly, I obliged.

In not even a full day I had managed to witness an incredible array the ocean and the Tongass have to offer. Plentiful salmon fishing, an otter, a humpback whale, and sea lions. In addition I was also given a rare glimpse of what it is like to be a local. I was able to have the paradigm of my boss here unto an academic at an NGO to which I was gifted this internship, change into a real participant of this ecosystem, and understand why he speaks of stewardship.

Not only were local humans stocking up protein for the cold dark months ahead, brown bears and black bears are frequently seen storing their salmon as thick layers of fat which will sustain them through the winter. In the surrounding trees bald eagles eagerly await a stunned salmon which did not pass the gauntlet of the falls or wind up prey to the bear or the human. Right now at Redoubt Bay, sockeye salmon seem like everything, stepping back a bit further they are just one species playing a crucial role in the complex ecosystem which makes up the Tongass.

Days like these are why we need to protect the Tongass: each animal, plant, the rain, the occasional sun plays a crucial role in this web of life. It would be unfortunate if people did not have the opportunities I was able to experience moving into the future.

This place is amazing, but there is trouble in the forest. Everyday more people want the resources the Tongass can provide… in a limited supply. Take too much of any one thing and this fragile ecosystem ceases to produce. Through interviewing the participants in this ecosystem the fish, the eagle, the human and fortunately not the bear I have come to understand the one species who most needs to know conservation and act accordingly. It is not the eagle, nor the fish, nor the bear, it is us. Although I have not quite figured out how to speak with salmon and the eagle, I would imagine they agree.

I was fortunate enough to have the opportunity to do a summer internship for the Sitka Conservation Society and be immersed with the most qualified people on the subject of conservation in the Tongass. Their mission is to protect the natural environment of this forest, and support the sustainability of communities in Southeast Alaska.