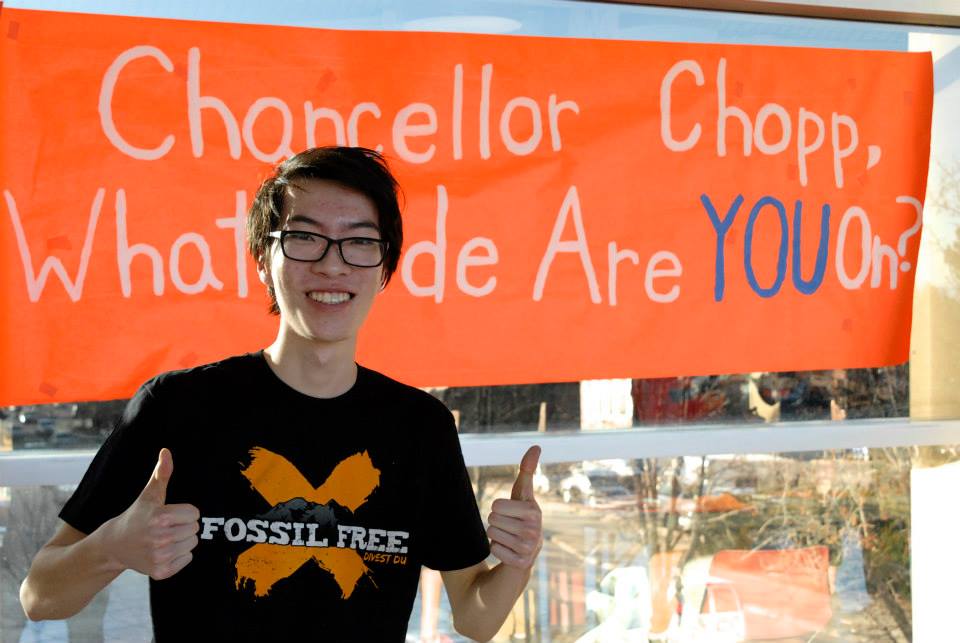 Here I am asking my school administrator: What side are you on?

My name is Kengo Nagaoka and I’m a second-year at the University of Denver. I was born and raised in Fairbanks, Alaska and still feel as though this place will be home for me for the rest of my life. I started getting involved with environmentalism as a freshman in high school working with the school’s recycling crew. By senior year, my friend Tristan and I had started an Environmental Club at school and were deeply engaged in Fairbanks’ air quality issue and the debate surrounding air quality regulations. I’ve always felt a love for my hometown and its community and hope to keep helping make it more sustainable and healthy to its citizens. 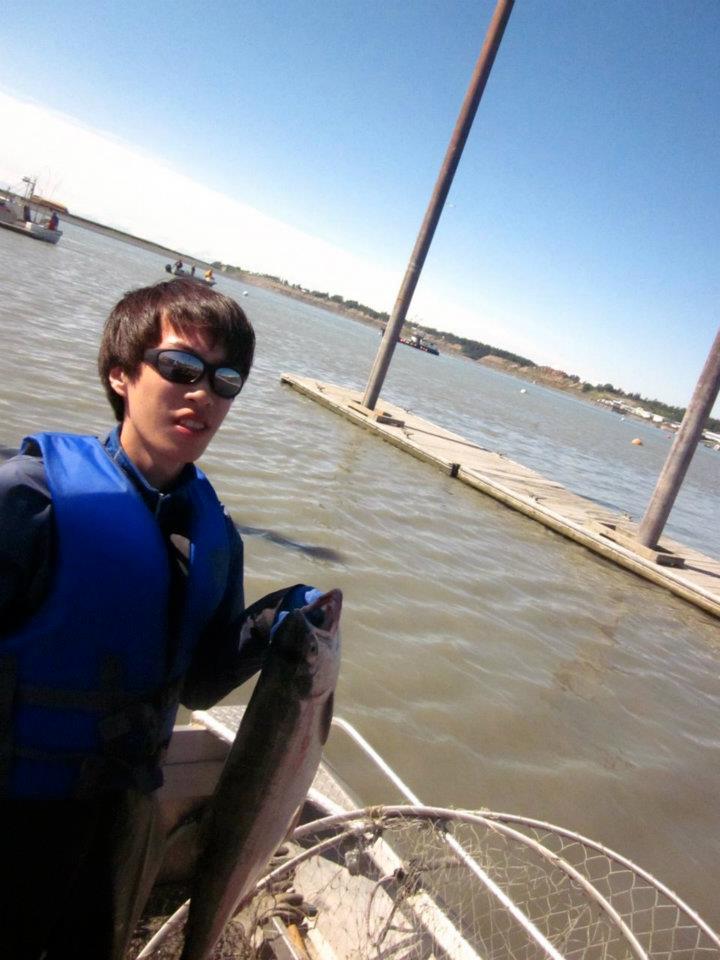 Here's me a few years back with a fresh catch

I entered as a freshman at the University of Denver with the acknowledgement that climate change is a direct effect of our actions and an overarching cause of many of the struggles we face today. I sought out the student group DivestDU so I could make the best of my stance as a college student to enact change in my community. As I became more and more involved with DivestDU’s outreach and organizing efforts, it became clear to me that the fossil fuel divestment movement that is sweeping campuses, businesses, and institutions around the world is unique and effective. Whether we like it or not, in this day and age money speaks, even if it is symbolic. Moving large amounts of money away from destructive industries says something about what people want in a way that resonates with business leaders, politicians, and others who may not be reached by less tangible actions. We live in an era where we cannot waste time on simple sustainability efforts; we need drastic change in the larger systems that govern how our economy works to be able to combat climate change effectively. By working for change in how my university views and uses its endowment, I believe I am making the best of the ability I have right now. 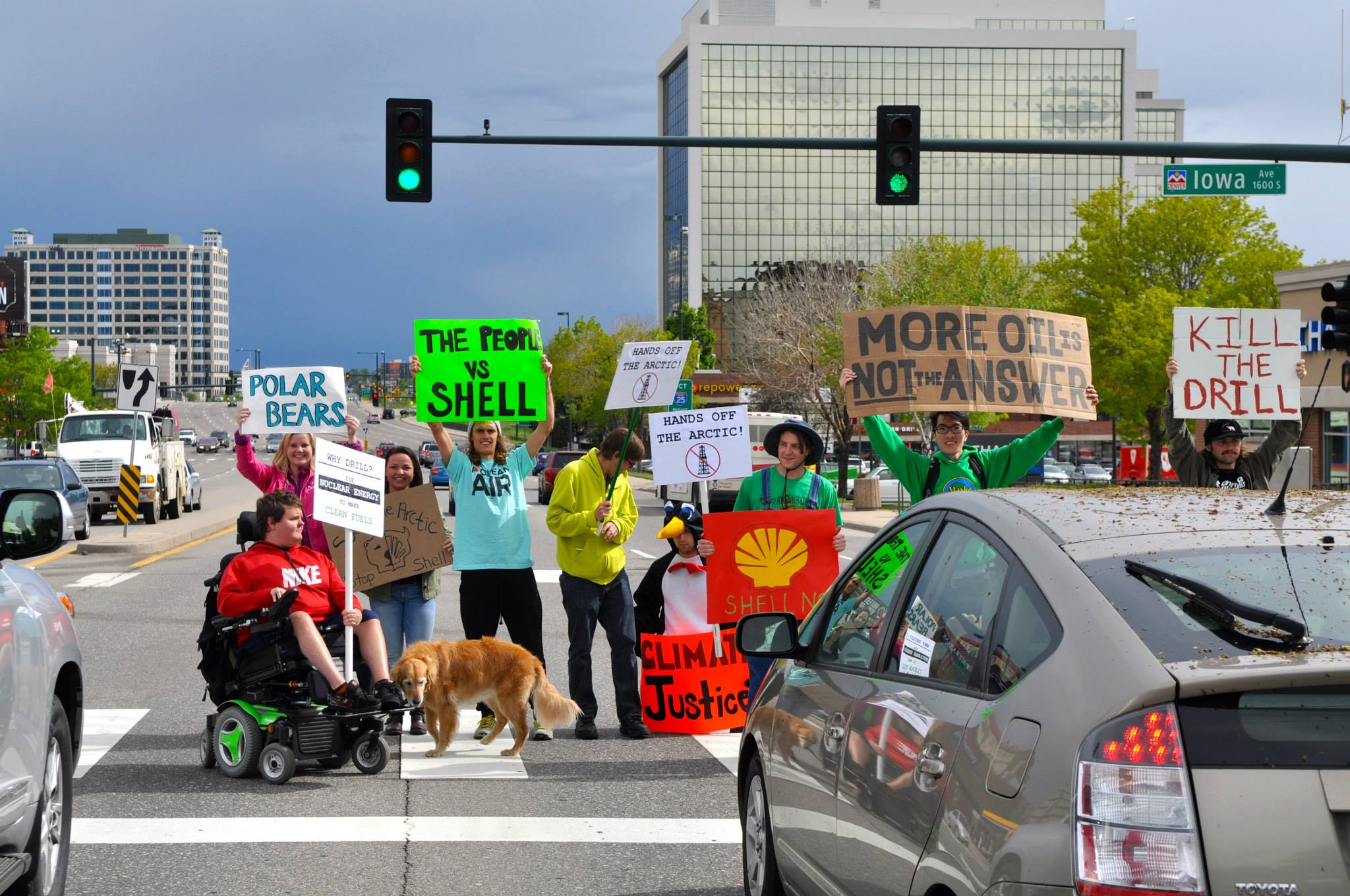 At this climate action, I held a sign declaring: More oil is not the answer

As a member of a growing network of climate justice activists in the divestment movement, I’ve been inspired by the pure energy and enthusiasm that I’ve seen in people around me. There’s a huge sense of responsibility in working in this movement: we’re creating a better future for ourselves, our children, and future generations. Knowing that I have these people behind by back, I’ve become more confident in talking to people about what we’re doing. The publicity and attention that is given to colleges and institutions when they commit to divesting from fossil fuels is half the battle, and is fueled by the work of enthusiastic individuals. The fossil fuel divestment movement is one where I feel valued and accountable for what I do.

Divestment becomes a complicated issue when I look back at my hometown and state of Alaska. Built up from the ground on oil money and yet already suffering from the effects of climate change, Alaska is a place where most people are not willing to face the fact that what’s sustaining our economy right now is also what’s bound to have irreparable consequences to the planet we live on. It makes me sad to think that proposing fossil fuel divestment for the University of Alaska system would be preposterous at this time, while cutting ties with oil is what is needed to ensure that Alaska does not fall in the coming decades with the fossil fuel industry. Alaska Governor Bill Walker hosted a convention in June 2015 to discuss possible economic policies that may increase non-oil revenues in Alaska. While this convention marked a starting point, there is much work to be done to shift the dialogue in my state from “how can we overcome this bump on the road,” that is, oil prices, to “how can we start working toward a long-term goal of oil independence.” I live in a state where oil soaks every aspect of economics, politics, and even social culture. I want a future in which this is not the case.