Kelsey Skaggs was born and raised in Juneau, and worked with SCS in 2010.  Now, she attends Harvard Law School, where she’s involved in the fossil fuel divestment campaign.  Harvard’s administration has been far from receptive to the student movement - they’ve refused to have open meetings to hear out the students’ request.  Last year, the campaign started looking into other avenues towards divestment.  Kelsey and two other students, as part of the Harvard Climate Justice Coalition, put together a lawsuit calling on Harvard to remove their investments from the fossil fuel industry.  I spoke with her about the lawsuit, and about her thoughts on climate justice.  Here’s what she had to say. 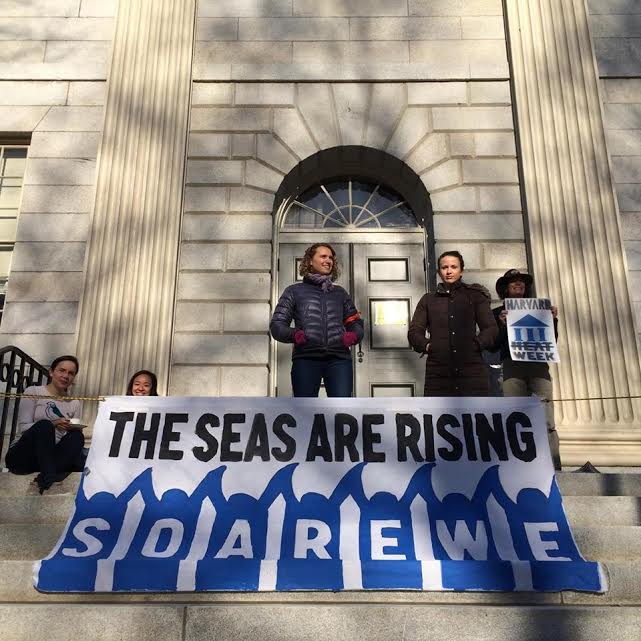 Here's Kelsey participating in a direct action on the Harvard campus

How did you get involved in the climate movement? What drew you in?

I became involved in the climate movement for two reasons. First, climate justice is social justice. The people who are hurt most by climate change are those who are already marginalized. Climate change worsens existing social inequalities, and tackling climate change is essential to addressing systemic injustice.

The other reason is that I love my home and I want to protect it. Southeast Alaska is wild and beautiful and very special to me, and very threatened by climate change.

What does climate justice mean?

Climate justice is based on the recognition that environmental destruction is related to, and perpetuates, social and economic inequality. In addition to a healthy planet, climate justice prioritizes social justice, equality, and the interests of people and communities over corporate profit.

Can you speak more to how growing up in Alaska influenced you to want to fight climate change?

Everyone has something they love that is threatened by climate change. Some of the things that I love most in the world are the rocky coast of the West Chichagof-Yakobi Wilderness, majestic old growth in the Tongass, bright snow on the Fairweather Range, and clear streams that run with snowmelt and later with salmon. I don't want them to erode, burn, melt, or die so that a handful of people can become even wealthier. They are worth fighting for.

More generally, growing up in Alaska gave me an appreciation of the natural world and the understanding that I am a part of it. One obstacle to climate action is that humans often see themselves as separate from their environment, rather than part of it and reliant on it. Being from Alaska also contributes to my feeling that climate action is urgent. While climate change may still feel like a faraway threat to some people, Alaskans can see that it is already here.

A panorama of the Fairweather Range.  Photo: Lucas Brown

Why have you chosen to use divestment as a tactic?

Fossil fuel corporations are destroying our world because doing so benefits them financially. This is a profoundly indefensible position. Divestment is a way for individuals, through their institutions, to take a stand for what they love and declare that they will not be part of its destruction.

That said, divestment is a short-term tactic intended to open up space for political action. Meaningful progress on climate change requires government action and international cooperation. But to get to that point, we have to weaken the power that fossil fuel companies have over our political leaders.

How did you and other students decide to file this lawsuit?

We did a lot of research, and in early 2014 we determined that we had a substantial basis for litigation. The campaign to divest Harvard’s endowment from fossil fuels has been going on since 2012. In all of that time, Harvard decision-makers have refused to engage in any meaningful consideration of divestment. In fact, they even arrested a student during a peaceful demonstration at which we were requesting nothing more than an open meeting on the issue. Faced with this intransigence, we had to explore new tactics. In the fight for climate justice, we have to use all of the tools available to us, and the law can be a powerful way to make change.

What are the legal grounds of the suit?

We make two separate legal arguments. First, according to its founding charter, Harvard has a duty to promote "the advancement and education of youth” and safeguard the physical campus. By investing in companies whose business practices cause climate change, they harm both of those interests. This is a violation of their charitable duties.

Second, we have brought a claim for injuries caused by Harvard’s intentional investment in abnormally dangerous activities. We bring this claim not as individuals, but on behalf of future generations who are severely harmed by climate change.

We seek injunctive relief rather than financial damages, meaning that we are only requesting an order from the court requiring Harvard to divest its endowment from fossil fuel corporations.

How has it been going? What are the next steps for this case?

We were granted a hearing last spring, and had the opportunity to argue our case before a judge. The courthouse was packed with divestment supporters and climate activists. Harvard tried to get the case dismissed, and the judge granted their request, so now we are appealing that decision. We hope to appear before the Supreme Judicial Court, the highest court in Massachusetts, during the upcoming academic year. We have also heard from many organizations who want to file briefs in support of our arguments, which we think will help our case.

The law has been slow to respond to climate change, and this poses a challenge for us. But the dramatic new problem of climate change requires new solutions, including legal ones. Our lawsuit is part of a broader effort to prompt the development of those solutions.

Students at Harvard escalated their actions this spring, staging a sit-in in an administrative building.  Photo: divestharvard.com

What are the long term actions that will need to be taken to address climate change?

Governments have to implement programs to quickly decrease emissions. This will involve a variety of tactics, such as regulating corporations, ending fossil fuel subsidies, funding renewable energy, strengthening public transportation and energy services, and favoring local production over the long-distance travel of goods. The question is how we can get governments to take these measures. Decreasing corporate power over government is a critical step.

We have to change our laws so we can hold fossil fuel companies responsible for the harm that they cause to people and the planet. Currently, we allow them to profit without paying for their damage. Making these companies pay will encourage the transition to energy sources that don’t cost us our future, and provide much-needed funds for adaptation.

More fundamentally, we need to change our relationship with the natural world. We prioritize economic growth over environmental security, and this has led us to disaster. Recovering from it requires a shift in cultural values, starting with the recognition that our collective well-being depends on the environment - and that both are more important than corporate profitability.

How optimistic do you feel about getting Harvard to divest?  What about with regard to the climate movement at large?

I think that Harvard will divest from fossil fuels. I hope that it does so in time to have a real impact and be a leader, rather than lagging behind.

The climate movement has gained tremendous momentum over the past year. It's true that we don't have much time - we have to act quickly to not only slow down the environmental catastrophe, but also do it in a way that is just and inclusive. I'm optimistic because more and more people are realizing that we can't just trust in our systems and our leaders to implement solutions - we have to fight for them.