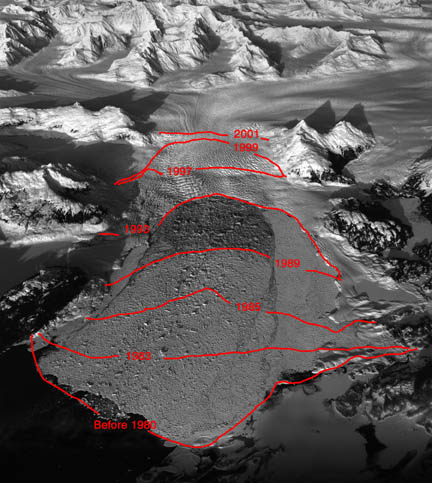 At left: the alarming retreat of the Columbia Glacier. Photo R. M. Krimmel/USGS

Attorney and global warming activist, Deborah Williams, says Alaska is the Paul Revere of global warming, bringing crucial awareness to the nation. Indeed, Alaska is seeing the catastrophic impacts of global warming more than in any other place in the country. We are the ones witnessing the ominous effects of this ever-present warming trend, which makes us the ones conspicuously capable of steering the rest of the country. During the last four decades, Alaska has heated up more than anywhere else in the nation, experiencing an increase of 3-5 degrees Fahrenheit annually and 7-10 degrees F in the winter. With such dramatic increases being played out in our own backyards, it’s no wonder Williams describes global warming as “the greatest threat to mankind!” Because it is very clear in this case that what happens locally is very much on its way to happening globally. But what is happening? Williams says scientists have been seeing the effects of global warming for years, and this is just a small part of what it’s all about:

It would appear that global warming deserves much more of our time and energy.

But what exactly is global warming? And what can we do about it?
Global warming is caused by an increase in the amount of carbon dioxide, methane, and nitrous oxide in the earth’s atmosphere. These gases trap specific wavelengths of heat and throw them right back at us. Carbon dioxide is the main concern because it is, in our day and age, such a common by-product. Whenever we burn wood, coal, gas or oil, we are putting carbon dioxide into the atmosphere. This may mean turning on a light, taking a hot shower, running the washing machine, keeping the computer on, or simply starting up the car.

Good news, though, is that there are multiple things that we as Sitkans can do, and one of the most valuable may simply be making sure that no old-growth forests are harvested again, ever. But let’s not limit ourselves to old-growth; let’s recognize the value that every living forest has at controlling and reversing global warming. According to one study, authorities need to consider carbon sequestration in Tongass Forest management. This is especially the case since the Tongass is the largest national forest in the US, and is part of the largest intact old-growth temperate rainforest in the world. Trees play a vital role in climate change by sequestering, or storing, carbon when they absorb carbon dioxide. As a tree grows, it absorbs CO2 from the air and, via photosynthesis, stores the carbon in its roots, branches, stems, and foliage. A living tree is a living “sink” in that it stores more carbon then it releases. By the time a tree reaches maturity, about half of the tree’s dry weight will be carbon! But as soon as a tree dies and decays, it becomes a carbon source. When a forest is harvested, burned or clear-cut, it becomes quite a large source indeed. In fact, as one source put it: “Though most Americans could probably name cars, trucks, and industry as major sources of CO2 emissions, the clearing and degradation of forests actually accounts for approximately 20 percent of annual CO2 emissions worldwide. This is more than the annual CO2 emissions generated in the United States by burning fossil fuels” (Catalyst). Conversely, the nation’s carbon sinks (grasslands, forests and agricultural lands) “absorb 1.1 to 2.6 million metric tons of CO2 each year, which is equivalent to 20 to 46 percent of total U.S. global warming emissions” (Catalyst).

Now is the time to think about what kind of an awesome impact our very own Tongass National Forest can have on global warming. Now is the time to wonder how ethical it would be to allow any more logging of our global treasure.

Check Out These Sources:

1.    Alaska Conservation Solutions, on the web at: www.alaskaconservationsolutions.com
2.    “Effects of Management on Carbon Sequestration in Forest Biomass in Southeast Alaska.” Wayne W. Leighty, Steven P. Hamburg, and John Caouette. Published in Ecosystems 2006.
3.    “Forest Carbon Sequestration.” Michelle Manion. Published in Catalyst: The Magazine of the Union of Concerned ScientistsVol. 3 No. 2 2004.
4.    Sitka Global Warming Group, on the web at: www.sitkaglobalwarming.org